50 years of innovation: The birth and evolution of the internet and cybersecurity

50 years ago, the first message was transmitted that gave birth to the phenomena that is the internet. But how’s it evolving and what does that mean for cybersecurity?

4.3 billion people used the internet in July 2019; that’s over 50 percent of the Earth’s population. Staggering. From viral videos to cloud computing, the internet entertains us, connects us and, in many ways, protects us. It’s come a long way in 50 years since October 29, 1969, when the first message was transmitted over an online network. It’s fair to say the internet will play a crucial part in our future. But first, let’s go back to the beginning.

It started with hello… kind of

The internet is defined as ‘a network of networks in which any one computer can send information to other computers.’ By that definition, its inception was in 1969 when the first network, ARPANET, was developed by the Advanced Research Projects Agency (ARPA). Originally, ARPA was created in 1958 with the aim of helping American military technology stay ahead of its enemies. Their big project? Build a computer network to send messages across the US.

ARPANET originally had five sites: Stanford, University of California Los Angeles (UCLA), University of California Santa Barbara, The University of Utah and BBN Technologies. In 1969 it spoke its first words; UCLA computer science professor Leonard Kleinrock sent a message from his school’s host computer to another computer at Stanford. He intended to write ‘login,’ but it crashed and only the letters ‘L’ and ‘O’ were sent. Which couldn’t have been more profound, really, as phonetically that spells ‘hello.’ ARPANET was renamed the internet when it linked 1,000 hosts and university and corporate labs, connecting the world in a way it hadn’t known before.

Fast forward to 1989: Tim Berners-Lee, a fellow at the physics laboratory CERN, Switzerland, connects pages of information on the internet with others, known as ‘links.’ He calls this HyperText Transfer Protocol, or HTTP – which was originally developed to meet the demand for automated information-sharing between scientists and universities around the world. He and his team also develop Universal Resource Locators (URLs) and HyperText Markup Language (HTML) to create websites. He scoops a Turing prize. Internet usage skyrockets. Everyone wins.

That same year, dial up Internet Service Providers (ISPs) popped up alongside modems, so everyone could access the internet (providing they had a phone line). Think America Online (AOL) and CompuServe. The world was now connected in what we retrospectively refer to as Web 1.0.

How the internet revolutionized business

Come 1993, Marc Andreessen created the first popular web browser, Mosaic, which allowed users to see pages as images and text, as opposed to just text. Amazon, Craigslist and eBay were amongst the first to join the revolution, evolving from stores and publications to dotcom entities, using the internet to widen their customer base.

The internet was in place, but there was little way to help users make sense of it. And so came search engines – a crucial part of the puzzle, especially for businesses. They were essential to help people navigate the internet but also to give brands more presence. In the first instance, you had Alta Vista and Yahoo!, then in 1998 Google burst onto the scene and began to build its empire. In a similar vein to Tim Berners-Lee’s HTTP tech, the reason Google was so successful at the time (and even now), was that it came from academia and pragmatic thinking to expand knowledge into the world rather than purely commercial demands. And both HTTP technology and search engines used a free-at-the-point-of-use model, without the need for a subscription to use it, or the cost of patent licensing to build on it.

The benefits of the internet for business 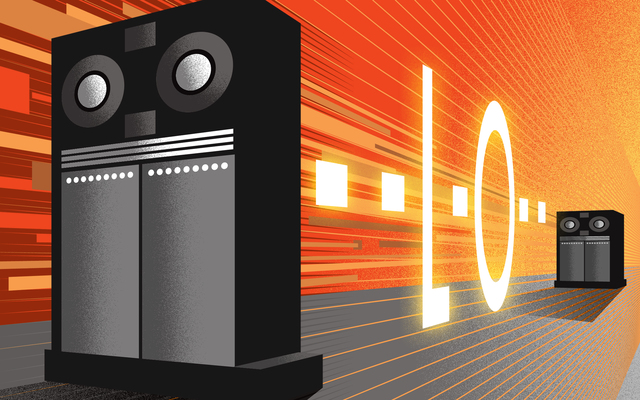 Businesses have been benefitting from the internet since search engines in the ’90s. Chiefly with the birth of ecommerce – the process of purchasing goods and services over the internet using secure connections and electronic payment services. With an online presence – notably websites and social media profiles – brands were now able to reach new audiences quickly. Fast forward 50 years and there’s no sign of that slowing down. Globally, ecommerce is worth $21 trillion, and with 2.14 billion online shoppers expected in 2021, the profits are only going to rise.

But it’s not just about reaching new audiences, it’s also about helping brands understand their customers. With the rise of email marketing, social media and cookie capture forms, businesses know their customers better than ever before. This means they’re able to tailor shopper experiences and build stronger connections.

On the operational side, technology like cloud computing – storing and accessing data and programs over the internet instead of through a computer’s hard drive – can help businesses save money, scale IT resources and enable their employees to work flexibly (another trend born out of the internet) to name a few.

Essentially, the progress of the internet has enabled traditional industries to grow, businesses to streamline their operations and provided a platform for new products and services. Smart homes, video streaming services and IoT connected devices are all possible with the internet. But that’s not to say there haven’t been challenges to security along the way.

The birth of cybersecurity

Internet threats and opportunities have grown exponentially, but quietly in the background, the cyber-tech industry has flourished. And it all started with a research project. Engineer Bob Thomas realized it was possible for a computer program to move across a network, so created a self-replicating program called the Creeper, which travelled between the ARPANET systems printing out the message, “I’m the creeper catch me if you can.” For clarification, the Creeper wasn’t a malicious virus, it was a proof-of-concept used to demonstrate a moveable application.

In response, Engineer Ray Tomlinson created Reaper, a program that would catch the Creeper and then delete it. Thus the first anti-virus software was born… in a way. Since then, viruses and anti-viruses have evolved at a rate of knots. One of the first malicious worms was developed by graduate student Robert Morris – creator of the Morris Worm. Widely regarded as the first major attack on the internet – the Morris Worm disabled 10 percent of the internet’s 60,000 host computers way back in 1988. At the time, total devastation. But if it did anything, it taught the world one thing: with greater connectivity come greater threats.

Since then, mammoth cyberattacks, including the historic Mafiaboy attack in 2000, have grown in frequency and impact. As beneficial as the internet’s been to businesses and people around the globe, the number of cyberattacks continues to rise, and become more devastating. The average cost of a data breach for small medium businesses (SMBs) stands at $108,000, while at enterprise-level that figure soars to $1.4m.

What’s next for the internet?

Internet traffic – both bandwidth used and total internet users – is likely to increase exponentially. Whereas traffic was first measured in terabytes (1,024Gb) and then petabytes (1,000,000Gb), it’s now measured in exabytes (one billions Gbs). According to Cisco’s Visual Networking Index, annual web traffic will triple from 122 exabytes in 2017 to 396 exabytes by 2022. That’s 396,000,000,000 Gb, or enough bandwidth to download 160 billion episodes of Doctor Who.

Not only will traffic rise, the amount of connected devices, known globally as the internet of things (IoT) will grow in popularity too. From food-buying to fitbits, the world is set to become more connected than ever before. In fact, a recent report by Siemens estimates that by 2022 there will be 29 billion connected devices, of which around 18 billion will be related to IoT. So, all in all, there’s no slowing down.

From digital innovation to data capture, the benefits of the internet for business is clear, wherever you are in the globe. But with opportunity comes threat. If you’re a business using the internet for whatever purpose, you’re at risk a cyberattack. The answer? Invest in ways to protect your data – from anti-virus and other perimeter security to cyber-skills training – and your future.

Well, you’ve heard my predictions, now it’s time for yours. Where do you think the internet will be in 2050?

This article represents the opinion of the author.

Where are we heading?

Life, work and the internet in 2050, what will it look like?  Add your prediction.

What a decade it’s been. Highs, lows and some of the biggest cyber-fails our world has ever seen. Can you remember all of them?

What is the dark web? And why should businesses care about it? Here’s what you need to know about monitoring the secretive counterpart of the public internet.