‘The Lady with the Lamp,’ English newspaper The Times christened Florence Nightingale in the mid-1850s. Illustrations showed her beaming rays of hope through nighttime visits to wounded soldiers in Crimea and India. She became a personification of virtue, popular in Queen Victoria’s stiff-upper-lipped British Empire. This romantic portrayal might’ve been itself radical because, at the time, nurses were thought uneducated, drunk and promiscuous.

Nightingale’s true legacy to healthcare was less in giving care and more in how she used data.

She made sure numbers were collected, analyzed and presented in ways that could be immediately understood by those who could do something about the horrific scale of death from a preventable infection.

This same skillset matters more than ever in meeting healthcare challenges today.

Nightingale’s journey to the frontline

Although it was considered unladylike at the time of her upbringing, Nightingale persuaded her father to let her study math. She later taught herself the art and science of nursing, which her family opposed, and went on to be a supervisor to ill women in London’s medical district, Harley Street.

In 1854, she traveled to Crimea with a group of nurses to volunteer in the war effort. They were in for a shock. While the war was high tech for its time, with telegraphs, railways and high-explosive shells, medical conditions were dire. There were beds without blankets and patients stacked in hallways, covered in excrement and dodging scuttling flea-ridden rats. Overworked medics battled with limited supplies.

Nightingale wrote to The Times describing the crisis, prompting Isambard Kingdom Brunel, top architect of the day, to design a prefabricated hospital. It was shipped to the frontlines.

Under Nightingale’s watch, efforts to improve hygiene – particularly handwashing –reduced mortality from 42 to 2 percent. Her actions weren’t born from experience or instinct, but from analyzing data.

Overworked medics in Crimea kept poor or no records, which meant obvious flaws in the system could go unnoticed. By starting a data-gathering team to record what was happening to patients, Nightingale built evidence that poor hygiene was killing more soldiers than the war itself. At the time, the theory that germs caused disease was not widely accepted.

Nightingale always placed high importance on data. She was one of the first to understand the power of data visualization to communicate complex findings instantly.

In the 1850s, when newspaper ink was smudgy, Nightingale presented statistics in novel ways for the day, like the pie chart and her own Nightingale rose diagram, which she named a ‘coxcomb’ — a kind of circular histogram. It showed how patient mortality changed each season and which deaths were from preventable causes, like field hospital hygiene. 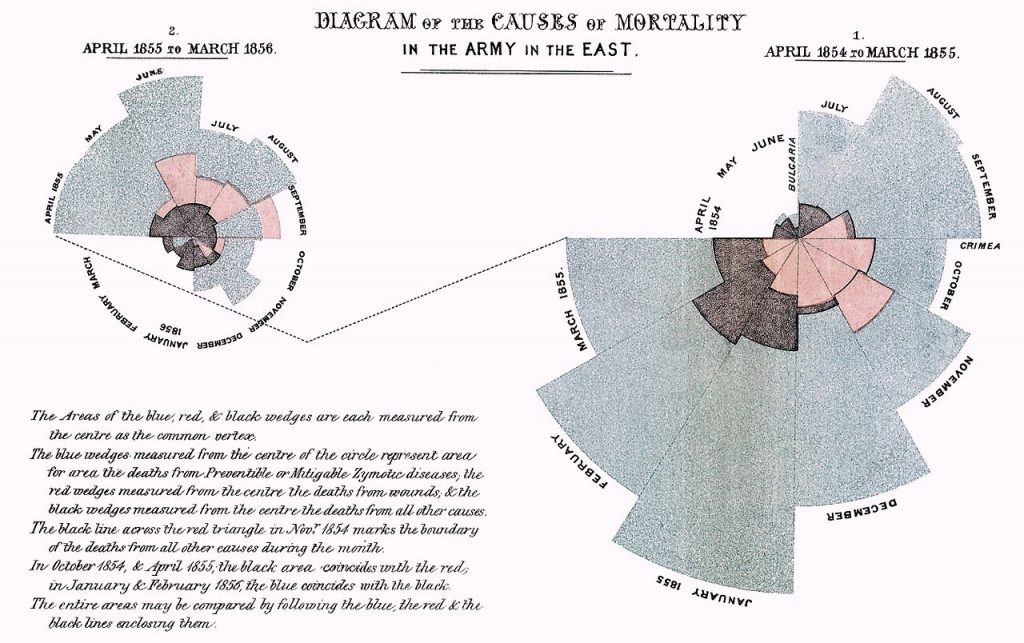 Florence Nightingale’s most famous infographic, the rose diagram, was an original way to show statistics in its time

She presented the coxcomb diagrams to the British government. They could understand the data without effort – a vast improvement on traditional statistic reports – and acted on it.

Florence Nightingale’s Joy of Stats, a film by The Open University, UK

Nightingale knew good communication could change the world. Collaborating with economics journalist and author Harriet Martineau, they published Nightingale’s research and proposed radical reform to war healthcare in the book, England And Her Soldiers. Although deemed unsuitable for distribution in army barracks to safeguard troops’ morale, many infantry soldiers flouted the censor and read it.

Nightingale’s research and nursing methods served as a model for all who followed, including nurses serving in the American Civil War. 200 years on from her birth, data scientists like Nightingale remain crucial to healthcare’s present and future.

Her insights on hygiene, and the importance of small actions like handwashing, have never been more prescient. London’s COVID-19 emergency hospital, opened in an exhibition center that usually showcases the latest technology, was named NHS (National Health Service) Nightingale Hospital.

Data visualization is critical in managing individual and public health, as people understand what they can do to flatten the curve of COVID-19 infection. Data also helps manage our health – from wearable trackers to get fit to big data to improve the outcomes for cancer patients. In cases where life and death depend on speed of action, AI data-processing tools like IBM Watson are helping medics make better decisions faster.

Healthcare advances fastest with new technologies. But it’s only by evolving those we already have – like data analytics and better visual communications – that everyone can understand the healthcare challenges we now face.

Nightingale transformed the healthcare crisis of her day by triaging the cause, effect and treatment with clear-cut analytics and then communicating data in a way that won hearts and minds. With the data science technology of today, we can continue her legacy and shine a light on better healthcare solutions for all.

Could lessons learned from measuring baseball runs in the movie Moneyball improve outcomes for therapy patients? Healthcare tech startup Takoda is setting up for a home run.

Innovations are appearing almost daily that aim to save lives in the face of the coronavirus COVID-19 pandemic.