Space is full of dangerous, fast-moving junk. To save lives and prevent costly damage, one start-up is working on a clever space junk trap.

As part of Kaspersky’s Bring on the Future series, we meet people and businesses around the world, changing the industry, and society, for the better.

While the impact of plastics on oceans and waterways has become big news in recent years, fewer people know there’s a similar problem in space. Over 60 years of space exploration have given us more than 500,000 pieces of space junk orbiting Earth. And those are just the ones we know about.

From a fingernail-sized section of paint to whole spaceships and satellites, these objects are a major risk to space safety. Collisions can damage expensive equipment and endanger the lives of both astronauts on missions and people on Earth.

We need to clean up to keep exploring space safely. Thankfully, action is hotting up. In 2019, the European Space Agency awarded the first contract to clean up space debris. In 2020, the UK Space Agency launched a 1 million UK pound fund for solutions to space junk monitoring challenges. And in June 2020, Kaspersky announced its support for StartRocket, a start-up with an ambitious new technology that could be the future of retrieving space debris. I’m speaking with StartRocket’s founder Vlad Sitnikov to learn more.

Suraya: Hi, Vlad. Tell us a bit about your background.

Vlad: I managed my own design studio early in my career and became an agency partner in 2004. I later founded the creative agency, the Hungry Boys, specializing in communication strategies for emerging technologies.

What got you interested in working on the problem of space junk?

I am inspired by a future in which people can travel freely into space, explore new planets and live on them. I’m dreaming of spending my twilight years on Mars. But now we have a huge problem – half a million human-made “things” orbiting our planet. These objects are a collision risk for satellites and spacecraft. And if we don’t solve the problem of space junk, we run the risk of being restricted to planet Earth by it.

You’ve developed a technology that could help. How does it work?

StartRocket’s solution for space debris is called the Foam Debris Catcher. It’s a series of small, autonomous satellites that catch space junk and take it out of orbit using sticky polymer foam.

The foam traps orbiting debris, then drags it toward Earth, causing the objects to incinerate in the planet’s atmosphere.

What are the foam’s advantages over other space junk removal ideas, like harpoons and nets?

Space junk is a risk to human life. It can do costly damage and comes in a huge range of sizes. That’s why we wanted to design an inexpensive solution that could work on any scale.

Compared with many other recent ideas for removing space junk, it’s much cheaper. We’re using affordable, cutting-edge technology all the way, including our mathematical modeling and the way we launch.

Where are you in the development process? Is it ready for testing?

Our chemists are researching the best formula for the foam. It must be able to complete the task while in near-Earth space, automatically attaching to pieces of space debris. 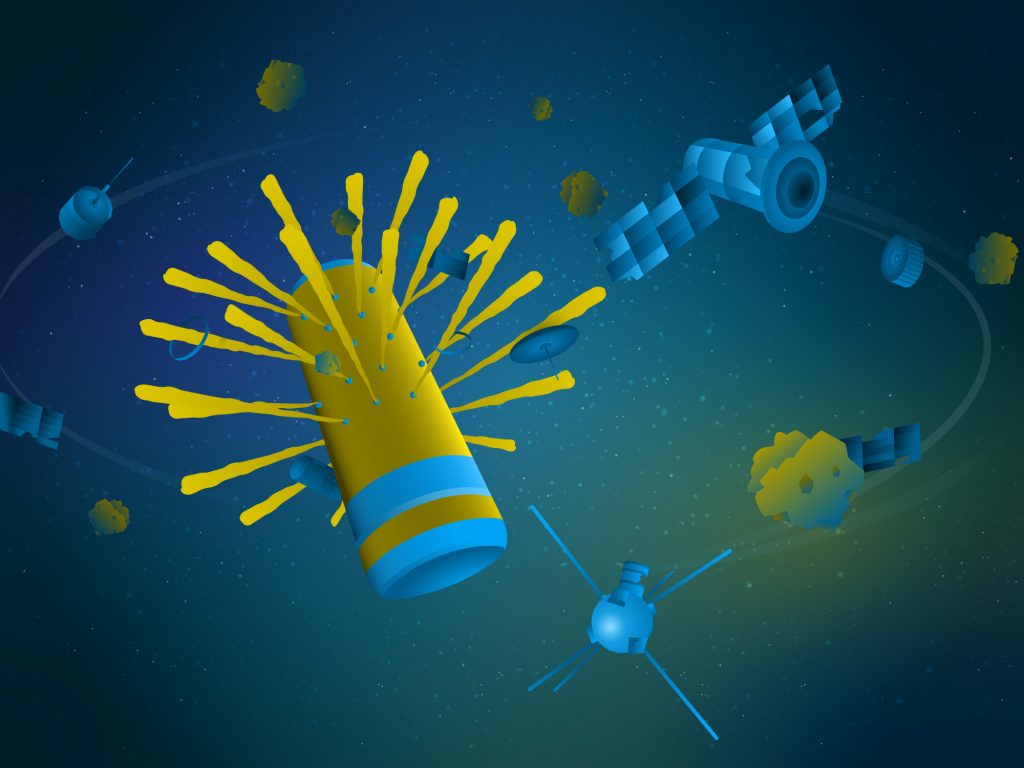 We’re working on a series of experiments to prove the foam’s potential on Earth and in space. We’ve planned the first test in orbit for 2023.

Could the foam get loose and become space junk in its own right?

That’s part of what we’re working on. We want to create a chemical formula for the foam that can withstand a collision with a space object. We’ve also looked at the possibility of the foam breaking satellites and other spacecraft during a collision. Although chances of it happening are low, we use calculations of the safest orbital direction to prevent it.

If the foam works, could it feasibly clean up all space junk?

We could selectively apply alternative foam formulas to catch the most dangerous objects. Cleaning up all space junk may not be necessary or desirable. In future, we may be able to re-use the debris as a raw material to build bases or as fuel for interstellar flights.

Have you thought of other potential uses for the foam on Earth or in space?

Foam may be the most common phenomenon that accompanies life. Life may have first arisen through foam. Our bones are foam. It’s hard to quantify potential uses.

We won’t know until we’ve done further work on the formula and tested it, but we’re considering the potential of the foam to quickly build large things in space without hi-tech robots or other mechanisms.

On Mars, for example, the atmosphere facilitates foaming. We dream our CubeSat (minisatellite) will be the first to form a foam hemisphere: A prototype for future Martian cities.

The foam could figuratively return to Earth from Mars in the form of affordable technologies, such as beautiful, comfortable housing.

Your business StartRocket earlier planned to sell advertising in the night sky. How do these projects connect for you?

In 2018 we planned to launch The Orbital Display, placing advertising in the night sky. We put it on hold because many people hated the idea. They wanted something different.

You’re now well into your start-up journey – congratulations! What’s your advice for a successful start-up?

Don’t hesitate and don’t be afraid. Just do your work in full swing.

All the best for the future, Vlad and StartRocket.

Securing space for a brighter tomorrow

Kaspersky’s partnership with StartRocket means we could be soon be cleaning up space.

Space travel isn’t just about finding life on Mars or taking a trip to the moon. Its technologies have helped us progress life and industry back on Earth.

Start-ups are not known for playing it safe, but some fledgling businesses are even playing in space.