55% of Couples Argue About Device Overuse: The Pros and Cons of Device Devotion in Relationships

In today’s digital world, it has become commonplace for couples to depend on devices to communicate and stay connected to each other.

In today’s digital world, it has become commonplace for couples to depend on devices to communicate and stay connected to each other. However, according to the latestKaspersky Lab study, there are not only pros of “connected love” but also cons that should be taken into account. For example, 55% of coupleshave argued about device overuse, highlighting how although devices often help to bring couples closer together, they can also push them apart and potentially put relationships at risk.

Many people today depend on devices to stay connected with their friends and family, and the same is true for those in relationships. Indeed, couples today frequently use devices and online messaging services to strengthen their relationship: 8-in-10 people always stay in touch with their partner online when they are apart from each other and 62% of people agree that communicating through devices and the internet helps them feel closer to their partner, especially for people who are dating but do not live together (75%).

This digital devotion also extends to shared devices, as 53% of people say their relationship has improved since sharing their online activities, such as accounts and devices. Clearly, there are positives that come from using devices, but there are also some negatives that need to be considered.

The research found that device usage can also lead to arguments between loved ones about a range of device-related issues such as overuse and cybersecurity incidents.

For example, 51% have argued about a device being used during a meal or face-to-face conversation. In addition, over half (55%) of people have argued with their partner due to too much time being spent on a device, which is higher (58%) for couples that live together, compared to 49% of those who are dating but live separately. This suggests that people don’t like feeling neglected and want their partner’s attention to be on them when they are together.

But excessive device usage isn’t the only thing that couples bicker about. Access to devices is also clearly a source of friction in relationships. A quarter (25%) have argued about whose turn it is to use the device, while forgetting to charge (45%) and losing (28%) devices are also causes of disagreements among couples.

Finally, there are cybersecurity issues to consider. Nearly a quarter (24%) of couples have argued after one person infected the device with malware and 19% have rowed after one partner lost money online by mistake or because of malware. As you would expect, couples that share devices are significantly more likely to argue about the issues mentioned above, highlighting how, when it comes to modern relationships, devices can be foes as well as friends.

“The capabilities of modern devices have created huge opportunities for couples, enabling them to constantly stay connected and build their relationship even when they are not together,” said Dmitry Aleshin, VP for Product Marketing, Kaspersky Lab. “But, there are cons as well as pros to take into account. These same devices which help couples to secure their love when they are apart, can also cause arguments when they are used irresponsibly. By making a conscious effort to take care of their digital lives – including devices, accounts and online activities – and to not neglect their partners in the physical world, people can enjoy the many benefits that the digital world offers without upsetting their other half.”

With people today spending so much time online and cybersecurity risks continuing to become more prevalent, they need to make sure that they are protected from the latest cyberthreats. One way to do this is through tools such as Kaspersky Total Security, which is a multifunctional solution that can protect every part of people’s digital lives and secure several devices at once. This allows couples to communicate with each other without having to worry about being compromised by malware or having their personal data fall into the wrong hands.

To read more about the product and how to secure your digital kingdom for two, visit the Kaspersky Lab website. You can also take the Kaspersky Lab quiz to find out if devices are having a negative impact on your relationship. 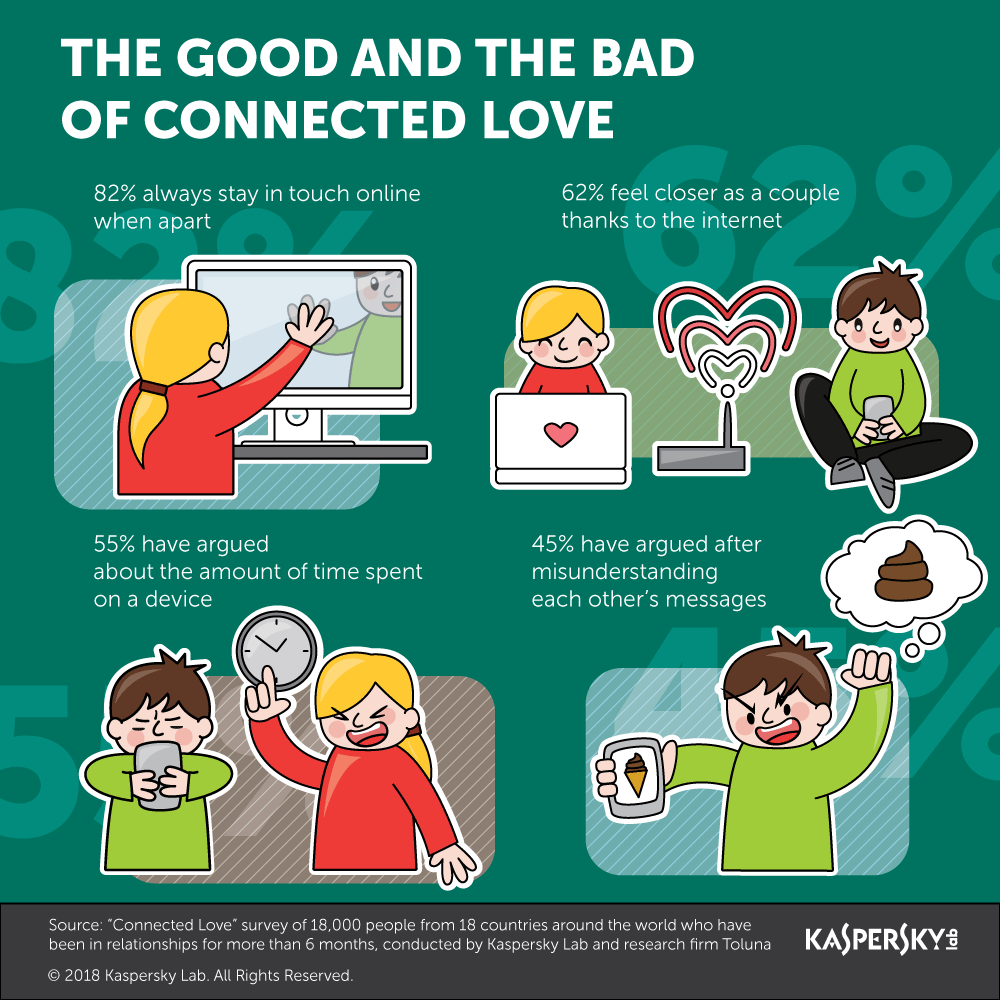 55% of Couples Argue About Device Overuse: The Pros and Cons of Device Devotion in Relationships

Kaspersky
In today’s digital world, it has become commonplace for couples to depend on devices to communicate and stay connected to each other.