A Digital Kingdom for Two:
Securing a Shared Online World

The Story of John and Amy 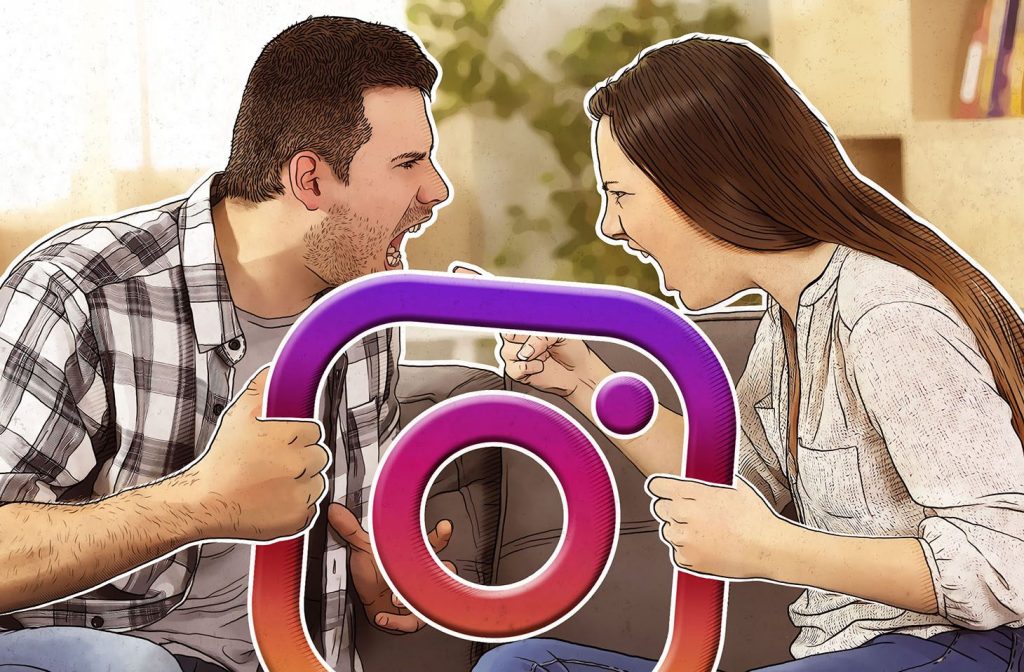 Sharing between partners is a natural next step in any relationship, and that’s the case online as well as in the physical world. Indeed, with so many of our daily interactions taking place online, sharing devices and even accounts with your other half is becoming as common place as sharing a bed or car.

And it can be a very positive thing. In fact, over half (53%) of people say that their relationship has improved since sharing online activities.

But whilst sharing your online world with your partner signals a commitment to the relationship, it could also bring a whole host of problems which could compromise your status as a couple – from security alarm bells to arguments.

To see the impact, we catch-up with John and Amy – a young couple, typical of many whose relationship was founded online, but has also been affected by the role that their devices and digital interactions have played in its development.

A year into their relationship, John and Amy have worked through their initial digital differences. They now share devices and have joint accounts to pay for bills and do their food shopping online, among other things. But despite the strength of their relationship, the couple’s use of technology and attitudes towards it have continued to have an impact.

This report, will explore the “cycle of digital sharing” which takes place between couples, as it turns from excitement, through to concern and arguments. It will look at the extent of device usage and account sharing, the implications it can have, and how couples such as John and Amy can regain control and build a secure digital kingdom for two.

An online survey conducted by research firm Toluna and Kaspersky Lab in January 2018 assessed the experiences of 18,000 respondents from 18 countries, who have been in a relationship for at least 6 months, and who are more than 18 years old.

Data was weighted to be globally representative and consistent, split equally between men and women.

Not all of the survey results have been included in this report. To request further data please contact Kaspersky Lab at prhq@kaspersky.com.

Chapter 1: John and Amy take the next step in sharing their lives 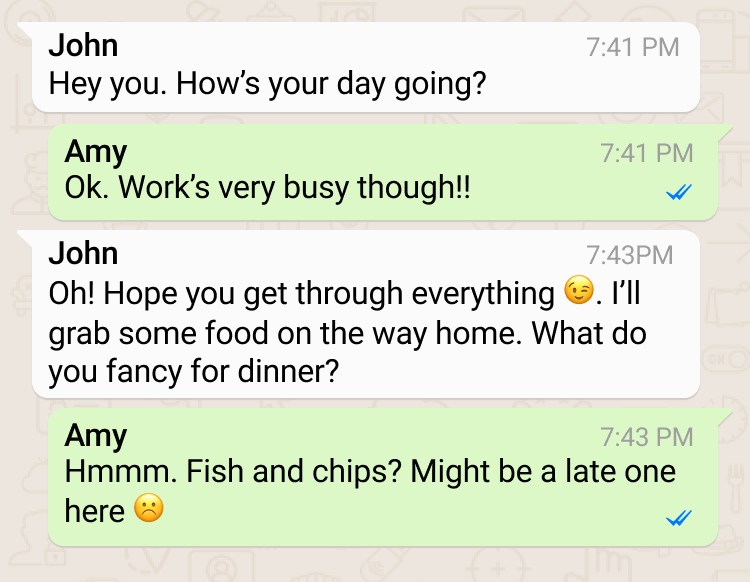 Many relationships today are built and thrive on communicating and interacting online. John and Amy are no exception. They met online, now live together and still continue to chat daily and make plans with each other via messenger.

This method of communication is a natural way of life for many couples, with a third (34%) admitting they talk to each other via devices more often than offline or face to face interactions. For same sex couples these figures increase significantly – two thirds (66%) of respondents in male to male relationships and 42% of female to female relationships communicate via devices more than offline or face to face.

There are also clear differences between couples at different stages of their relationship. Only just over a quarter of those who live together (27%) communicate with each other more often online, which is similar for those who are married (30%) and therefore also likely to live together. This figure rises to 52% for couples who are dating, but not living together.

It is clear that online tools also provide an easy way for couples to stay in touch when apart from each other, with 82% of people relying on such methods to keep in constant contact. This ease and dependency of online communications can also have a positive effect for many couples, with 62% agreeing that communicating through devices and the Internet makes them feel closer to each other (these figures rise significantly among male to male couples and among couples who have been together less than nine years).

It is therefore only natural that sharing devices, social channels and other online accounts is the next logical step in a blossoming relationship. It can even help it to flourish. Indeed, 82% of couples we spoke to share a device of some kind with each other. When it comes to sharing online accounts, 77% of respondents admit to sharing one form of account and we see that the more time couples spend together, the more willing they are to share devices and accounts with each other. 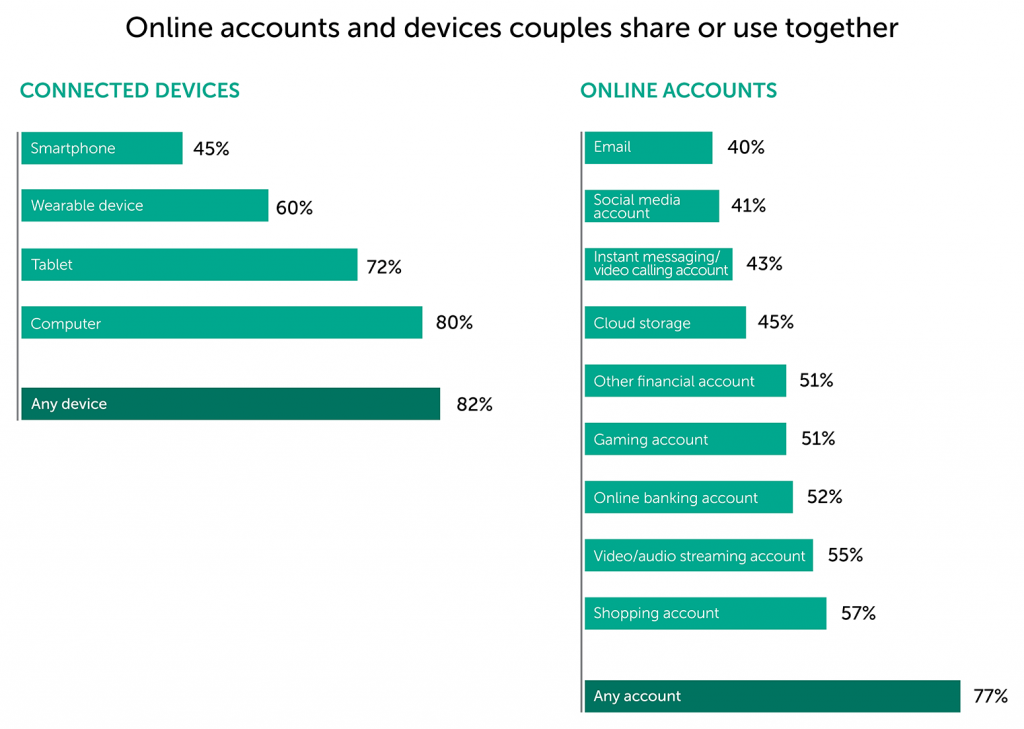 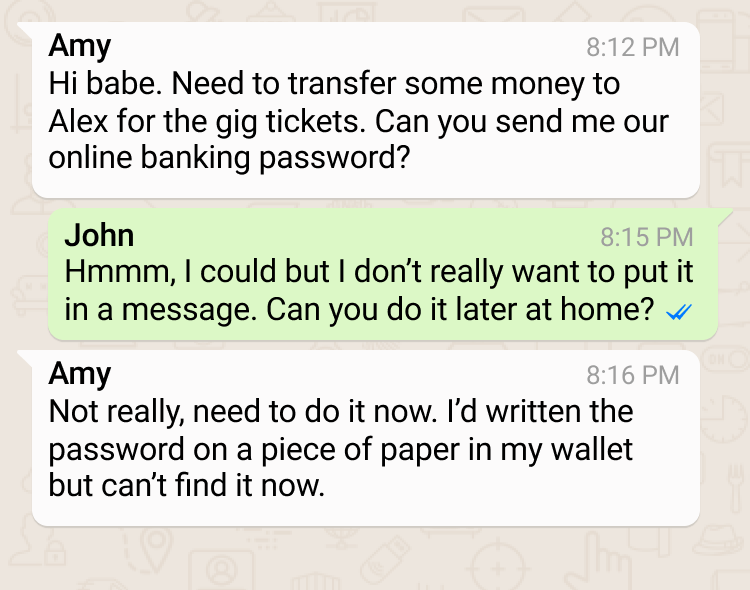 After the initial excitement surrounding the sharing of their digital lives, John starts to worry about the extent of this sharing and the vulnerable position he could find himself in.

For many couples, this is the stage when alarm bells (should) start to ring. Instead of being in control of your own online destiny and the security of your personal information, the responsibility of safeguarding your online footprint is now shared with – and at the mercy of – another.

Different levels of cyber savviness within a relationship are a cause for concern and can have a big impact on sharing all with your partner – increasing online risk and vulnerabilities for you both. Over half of the people we spoke to (57%) think they are more cyber savvy than their partner, with nine out of 10 more cyber savvy people (94%) always trying to help their other half with technology questions. However, their help might not always be welcomed or sought in a sticky situation, with almost a third (31%) of people who find themselves less cyber savvy than their partners avoiding asking them for help when they face problems online (43% of men avoid asking for help compared with 28% of women).

A lack of knowledge, risky behavior and insecure practices can result in putting both you and your partner in a vulnerable position. Despite passwords being the first line of protection for devices and accounts, almost two-thirds () of people use the same password for several accounts and of those who share a device with their partner, 34% admit to having left the device unattended in public. Interestingly, both the more cyber savvy partners, and those that are less cyber savvy, conduct themselves insecurely online – putting themselves and their loved ones at risk. 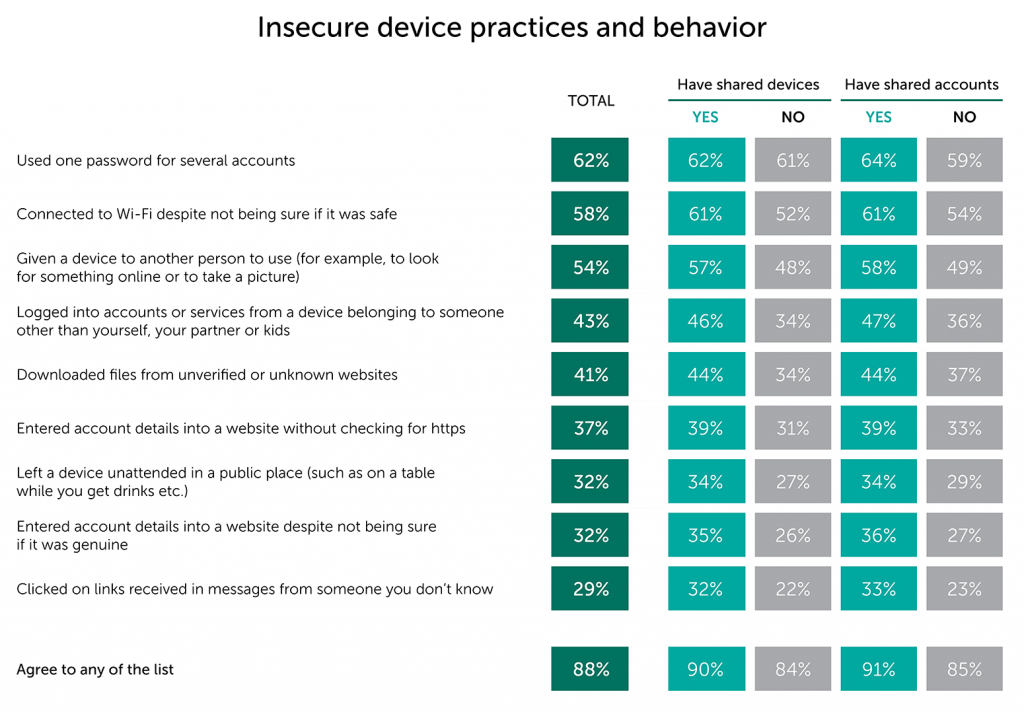 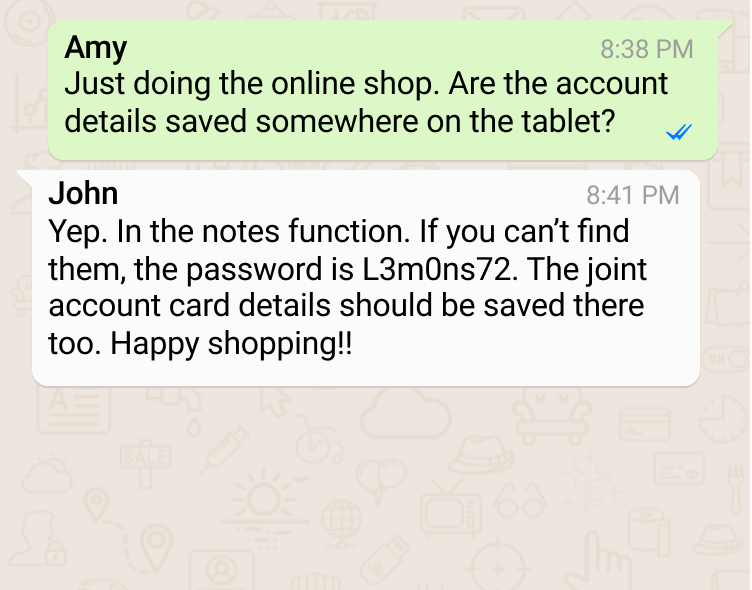 Concerns that partners have around the safety of personal information are well-founded, with devices and online accounts a haven for confidential and secret data. A lack of cyber savviness, poor security practices and allowing others to use your devices and accounts, could put individuals at increased risk from the actions of their partners (and beyond). Something that may be exacerbated when digital privacy becomes diluted within a relationship – to find out more about the issue of digital privacy in relationships, see our previous report: Connected Love: Privacy in Relationships and the Boundaries of Personal Space.

John admits using his personal devices for work purposes and as a result has a lot of information stored on these devices, which Amy can also access. To speed up the weekly online shop, the couple also store and share bank card numbers on their devices as well as log-in details for other online accounts so that they don’t forget them.

And they are not alone in such practices, with over half (58%) of people storing business or work-related data on their own device or account, or one they share with their partner, 46% storing access details to joint accounts the same way, and the same percent storing financial information including PINs.

With so much valuable information stored on devices and in accounts shared with your partner, any careless behavior can have disastrous effects for both your relationship and the security of the data stored on your device or online. For a third () of people we spoke to, this has taken the form of accidentally deleting data. 30% admit to having damaged the device and a quarter (27%) have even lost it. In addition, 72% of those couples storing business-related data on their or their partners’ devices or accounts, have left a device unattended in a public place.

A staggering 32% of those who share a device with their partner have clicked on links received in messages from someone they didn’t know; 34% have left a device unattended in a public place; 44% have downloaded files from unverified websites and 62% use one password for several accounts. Such insecure behavior could be extremely damaging for both parties.

A lack of cyber savviness has also caught a quarter (24%) of people out, when they have accidentally infected a device with malware. In 16% of cases, individuals have lost money online by mistake or because of malware. 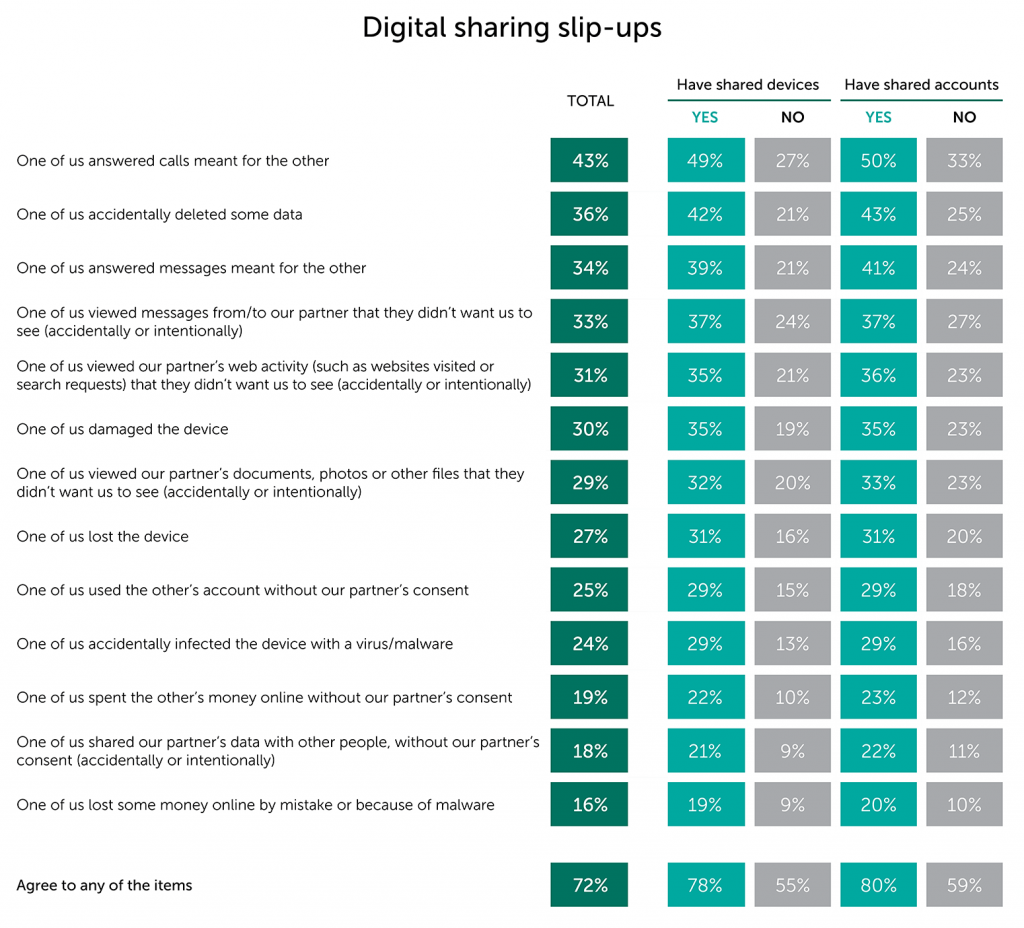 Chapter 4: Cracks start to show in the “Jamey” world 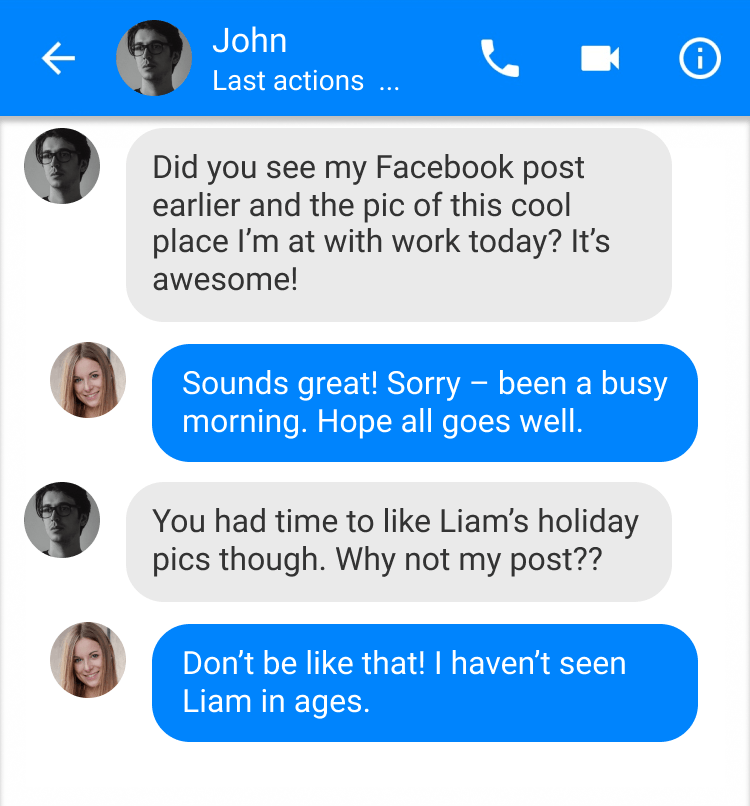 We have seen how reliance on devices to conduct a relationship can spiral and impact our lives online. But they can also culminate in consequences which go far beyond the device or data level. As well as bringing couples together (53% feel that their relationship has improved since sharing their online activities), devices can also push them apart, with arguments and altercations ensuing for a variety of reasons…

Most people () admit to arguing because their partner spends too much time on their device. Interestingly this rises to 72% of male to male couples, and 66% among those who also say that sharing online activities has actually improved their relationship. In addition, arguments around excessive device use are more common between those living together (58%) compared to those who are dating but live separately (49%). These findings all suggest that when they are with their other half, many find it frustrating that their partner’s eyes are not always on them!

Overuse isn’t the only device-related pain point for couples. For example, using devices during meal times or during a face-to-face conversation is also a big no-no for 51% of people.

Finally, what people do on their devices can also be upsetting for partners, and can become a source of friction in a relationship.

For example, digital communication between couples has been the cause of arguments for 45% of our survey respondents, due to a misunderstanding over the wording or images etc. in messages from one to the other. What’s more, 41% have also argued when one partner has communicated online with someone else that the other is jealous of. Something that John and Amy know only too much about! Unfortunately, same sex couples argue about this sort of thing even more than John and Amy – 67% of male to male couples and 52% of female to female couples admit they have argued about one partner communicating with someone the other is jealous of. 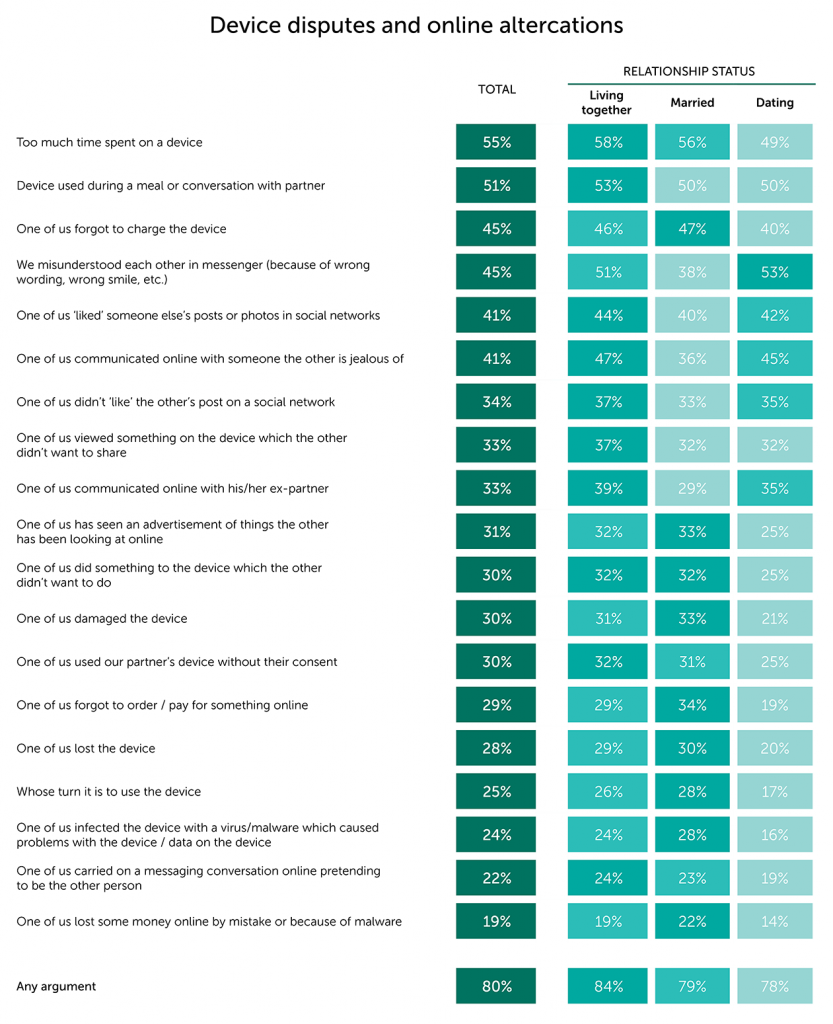 It’s clear that sharing devices and accounts is inevitable for couples who conduct most of their life online. But in doing so, they are also letting in an element of risk and vulnerability which must be countered with a shared responsibility.

John and Amy are still finding their feet when it comes to sharing their offline and online lives and how they can work in harmony. Just how far sharing goes will be different for every couple, but whatever extent it reaches, if you share your digital life, you need to share protection too.

Much like setting up home together, having strong foundations for a shared digital kingdom will ensure the John’s and Amy’s of this world maintain control over their individual digital lives and offline relationships.

To find out more about these products and how to secure your individual and shared digital kingdoms – whether you’re in a romantic relationship or otherwise, visit the Kaspersky Lab website.