Stalkerware – which enables someone to spy on another person’s private life using a smart device – affected more than 32,000 Kaspersky mobile users globally last year. Along with other technologies, stalkerware is often used in abusive relationships. Research has identified a direct link between online and offline violence, making it even more essential to comprehensively tackle this issue.

‘The State of Stalkerware in 2021’ report analyzes the use of stalkerware around the world, with the aim of better understanding the threat it poses. It provides some analysis on the phenomenon of stalkerware, and more broadly on technological abuse, as well as tips for non-profit organizations and potential victims.

While we’ve witnessed a significant decrease in affected users compared with the data gathered by Kaspersky since 2018, and a 39% decrease from Kaspersky’s 2020 numbers, it is important to highlight that these statistics represent only the tip of the iceberg. According to a rough estimate from the Coalition Against Stalkerware, usage of stalkerware could be close to one million instances, globally, each year.

By comparing the results of this research with the results of a Digital Stalking survey conducted at the end of 2021, it’s easy to see a link between online and offline violence. 24% of people surveyed confirmed being stalked using technology, and 25% confirmed having experienced violence or abuse at the hands of their partner. We also found the same correlation in most of the countries the survey was run. 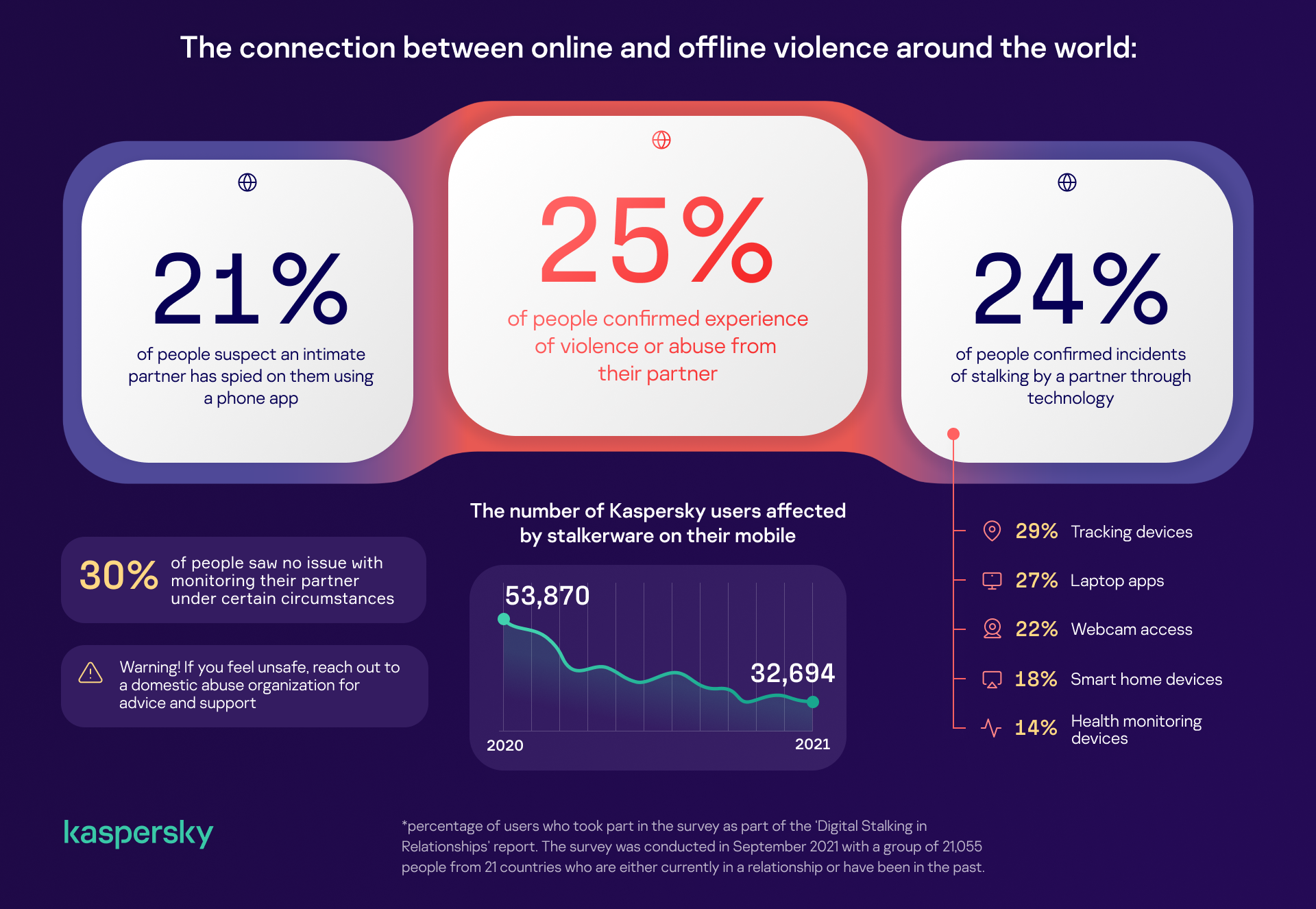 Two non-profit organizations who also participated in the report and shared their experience from working with victims – US-based NNEDV (the National Network to End Domestic Violence) and WWP EN (the European Network for the Work with Perpetrators of Domestic Violence) – confirm that tech-enabled abuse is a growing issue.

“ICT technologies are powerful tools for perpetrators exerting coercive control, especially in relationships where violence is already present offline” writes Berta Vall Castelló and Anna McKenzie from WWP EN. Domestic violence has significantly increased during the pandemic, especially during lockdowns. In addition, “there is a growing rate of smart devices – including home assistants, connected appliances, and security systems connected to WiFi networks and smartphones – used in intimate partner violence. While stalkerware is a common concern, there are many other tools available for tech abuse,” according to Toby Shulruff from NNEDV’s Safety Net project.

Stalkerware continues to affect victims everywhere in the world. Kaspersky has identified affected users in over 185 countries and territories, with Russia, Brazil, the United States, and India again being the top four countries with the largest number of unique users identified. Germany is the only European country in our top 10 most affected countries.

This edition of the ‘State of Stalkerware’ report also provides an overview of the most affected countries at a regional level, with Kaspersky’s statistics for North America, Latin America, Europe, Middle East and Africa, Eastern Europe (excl. EU countries), Russia and Central Asia, and the Asia Pacific region.

How Kaspersky collaborates with external stakeholders to fight stalkerware

Kaspersky is one of the co-founders and drivers of the Coalition Against Stalkerware, an international group dedicated to tackling stalkerware and combating domestic violence. Interpol is a supporter of the Coalition and in 2021, together with Kaspersky, delivered training to more than 200 law enforcement officers on the topic of stalkerware.

Additionally, Kaspersky is one of the partners of the DeStalk project. Funded by the European Commission, this research project aims to develop a strategy to train and support professionals in victim support services, perpetrator programmes, officers of institutions and local government amongst others.

Kaspersky has also developed TinyCheck, a free, open-source tool which aims to facilitate the detection of stalkerware in a simple, quick, and non-invasive way on a victim’s device. It can run on any OS without making the perpetrator aware. In 2021, multiple non-profit organizations in the field of domestic violence tested TinyCheck and provided feedback to help improve it. Police forces and judicial bodies in several countries have also taken an interest in the tool as a way to better support victims.

Read the full report looking into stalkerware threats in 2021 on Securelist.

Kaspersky is a global cybersecurity and digital privacy company founded in 1997. Kaspersky's deep threat intelligence and security expertise is constantly transforming into innovative security solutions and services to protect businesses, critical infrastructure, governments and consumers around the globe. The company's comprehensive security portfolio includes leading endpoint protection and a number of specialized security solutions and services to fight sophisticated and evolving digital threats. Over 400 million users are protected by Kaspersky technologies and we help 240,000 corporate clients protect what matters most to them. Learn more at www.kaspersky.com.