Only birds in the sky: Kaspersky launches new solution to combat privacy and security risks from civilian drones

Kaspersky has launched a new solution designed to help organizations and property owners defend themselves from unauthorized trespassing by civilian drones.

Through an exceptional combination of several sensors – including a new approach to drone detection founded by the company using laser scanning – and machine learning technologies, Kaspersky Antidrone can automatically spot, identify and prohibit unmanned aircraft from entering restricted areas. This is all done without damaging the devices.

In 2018, the global drone market was estimated to be worth $14 billion and is expected to reach $43 billion by 2024. This growth is driven by the potential opportunities and positive changes that the use of unmanned aerial vehicles can bring – from delivering goods and inspecting proposed mining sites or building constructions, through to fulfilling entertainment interests.

However, the mass adoption of this revolutionary technology could be affected by the negative connotations often associated with drones. In fact a recent study in UK found that only 31% of respondents admitted having a positive attitude towards them. This perception is largely driven by cases of improper or illegal use of unmanned aircrafts. They can be leveraged for spying purposes, injure people through crashing, cause damage to critical infrastructure including nuclear power stations, or disrupt normal operations of an airport, as was the case when the runway of UK airport London Gatwick was closed because of flying drones. 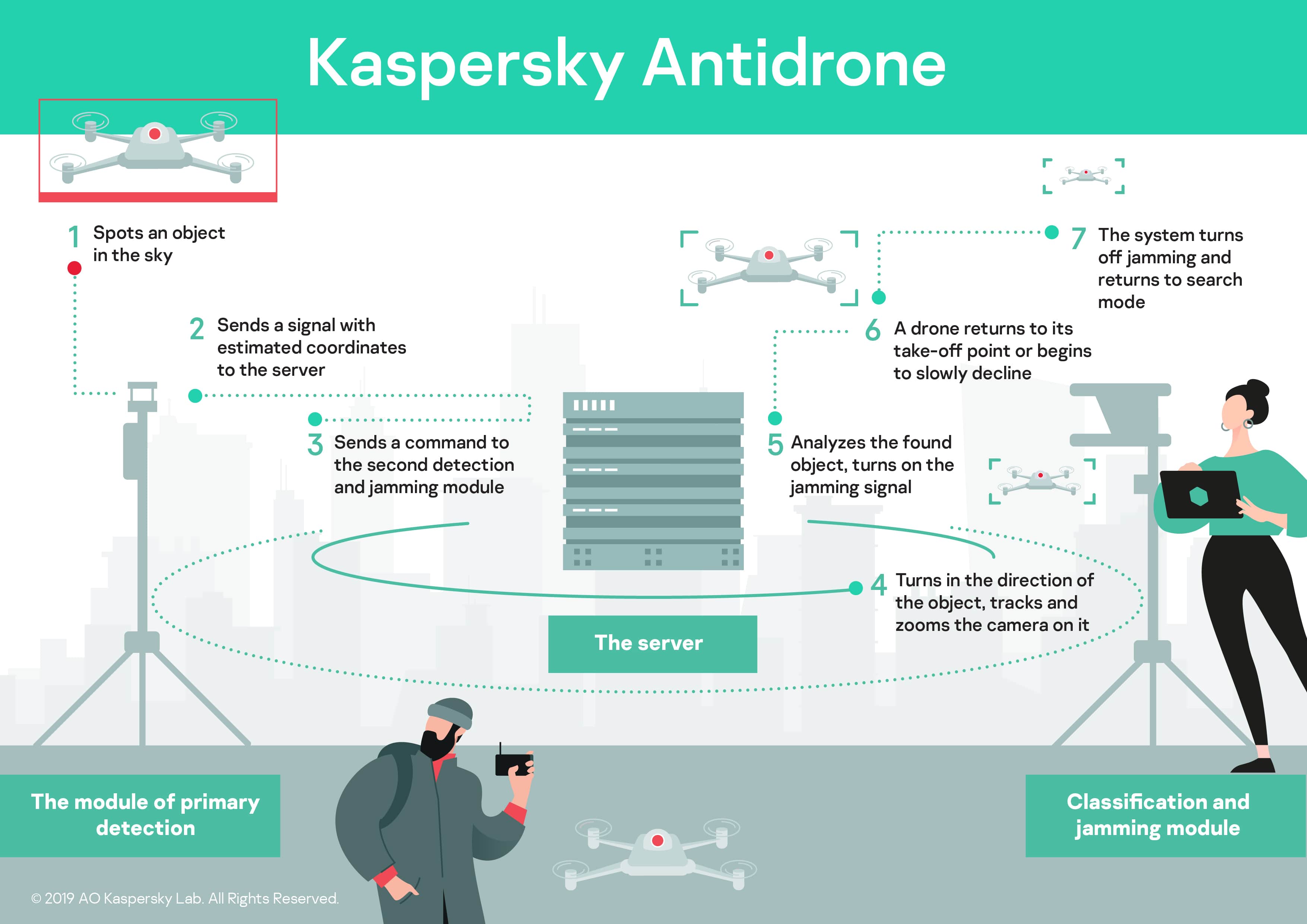 For these reasons it is important to build and maintain trust in the technology and safeguard its role as a key innovation for businesses and individuals, by ensuring that it does not pose a risk to privacy and safety. To help make the use of unmanned aircraft systems safer, reduce the associated risks and increase operator responsibility, Kaspersky has developed its own antidrone solution.

Kaspersky Antidrone software coordinates the work of several hardware modules provided by partners and distinguishes drones from other objects. The primary detection module searches for drones using video cameras combined with radar, LIDAR, and audio sensors –  depending on the customers’ needs and environment. Using a laser scanner to determine the position of the drone is unique to Kaspersky’s solution, and has not been applied to this field before.

When a moving object is detected in the sky, its coordinates are transmitted to a dedicated server, which then sends them on to a special unit. In accordance with data from the primary detection module, this unit rotates towards the object, tracks it and then the camera zooms in on it. At the same time, a neural network, trained to identify drones among other moving items, analyzes the object on the video. If it is distinguished as a drone, the server sends the command to the dedicated module to jam the communication between the device and its controller. As a result, the drone either flies back to the place it took off from or lands in the location where it lost signal with the controller. This means that the device will not be damaged, as there is no physical contact or attack towards the drone.

“Many members of Kaspersky Antidrone team, myself included, have long been drone pilots. Unmanned aircraft can sometimes pose real danger. For instance, I’ve witnessed some risky situations during public events. It clearly causes some doubt around the use of the technology. Unfortunately, as a drone pilot, you often don’t know which locations are prohibited, so when your drone is unexpectedly crushed or physically attacked with hostile protection measures, it is very frustrating. That’s why, during the development of our product, we took the interests of drone enthusiasts as well as safety requirements and concerns into account. This helped us develop a way to ensure drones do not enter prohibited areas, without damaging them,” comments Vladimir Turov, Project Owner of Kaspersky Antidrone.

The software can be delivered as a stand-alone solution within third-party hardware, as a mobile version (for example, to be used on the top of off-road cars), or integrated with other monitoring systems, including smart home infrastructure.

To find out more about Kaspersky Antidrone and its availability, please visit the official website.

Only birds in the sky: Kaspersky launches new solution to combat privacy and security risks from civilian drones

Kaspersky
Kaspersky has launched a new solution designed to help organizations and property owners defend themselves from unauthorized trespassing by civilian drones.