Every year Kaspersky Lab experts evaluate the level of cyber-threats. In 2014 we saw considerable growth in the number of malicious attacks on user computers and mobile devices, further development of financial malware and a change in the vectors of web attacks. In 2013, most web attacks were carried out using malicious web resources located in the USA and Russia while in 2014 Germany hosted more malicious sites than everywhere except the USA. The Netherlands remained in 3rd place. 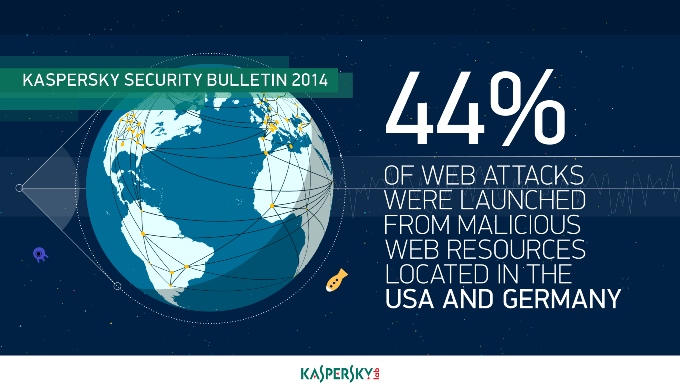 “2011 was the year of mobile malware formation, especially on Android-based devices; 2012 was when they developed and 2013 was when they reached maturity. In 2014 mobile malware focused on financial issues: the number of mobile banking Trojans was nine times greater than in the previous year and developing in this area is continuing at an alarming rate,” said Roman Unuchek, Senior Mobile Malware Analyst at Kaspersky Lab.

The fraudsters who specialize in mobile financial malware are probably inspired by their experienced “colleagues” who have been stealing money via personal computers for years. Zeus remains the most widespread banking Trojan with ChePro and Lohmys coming second and third. Three quarters of attacks targeting users’ money were carried out using banking malware but these are not the only financial threats. Bitcoin wallet theft was the second most popular banking threat (14%). Bitcoin mining software (10%) is another threat related to the crypto currency. It uses computing resources to generate bitcoins.

Maria Garnaeva, Security Expert at Kaspersky Lab’s Global Research and Analysis Team, said: “One of the most effective ways to deliver malware to user computers is to exploit vulnerabilities in Oracle Java and in browsers such as Explorer, Mozilla Firefox, etc. In addition, cybercriminals continue to use exploits for Adobe Reader vulnerabilities. These infection techniques remain popular simply because social engineering techniques are still effective. Each year we see how cybercriminals are creative more inventive ways of luring in their victims. That is why recipients are still willing to read a seemingly harmless e-mail from an unexpected source and then open attachments or follow links that expose them to malicious programs.”

To watch Kaspersky Lab's video “Hacked off in 2014: the cyber-battle for cash and privacy”, please click here.

The full report is available on the Securelist website.

One billion more: Kaspersky Lab counts up this year’s cyber-threats

Kaspersky
Every year Kaspersky Lab experts evaluate the level of cyber-threats. In 2014 we saw considerable growth in the number of malicious attacks on user computers and mobile devices, further development of financial malware and a change in the vectors of web attacks.