From Shaking Their Hands to Paying Off Their Debts: Third party Cybersecurity Failures Cost Businesses the Most

While more companies are investing in cybersecurity regardless of ROI (63% in 2017 compared to 56% in 2016), a new study from Kaspersky Lab and B2B International has found that the average cost of a cybersecurity incident is growing.

While more companies are investing in cybersecurity regardless of ROI (63% in 2017 compared to 56% in 2016), a new study from Kaspersky Lab and B2B International has found that the average cost of a cybersecurity incident is growing. According to the report ‘IT Security: cost-center or strategic investment?’, the most costly cybersecurity breaches for businesses of all sizes result from the failures of third parties, which means that companies should not only invest in their own protection, but also pay attention to that of their business partners.

This year’s study reveals promising developments in the importance being placed on IT security. Businesses globally are starting to view it as a strategic investment and the share of IT budgets that is being spent on IT security is growing, reaching almost a quarter (23%) of IT budgets in large corporations. This pattern is consistent across businesses of all sizes, including very small businesses where resources are usually in short supply. However, while security appears to be receiving a larger proportion of the IT budget pie, the pie itself is getting smaller. For example, the average IT security budget for enterprises in absolute terms dropped from $25.5M last year to $13.7M in 2017.

This is a concern for businesses, especially given the fact that - unlike IT security budgets - security breaches aren’t getting cheaper to recover from. This year, SMBs paid an average of $87.8K per security incident (compared to $86.5k in 2016), while enterprises faced an even larger increase of $992K in 2017, compared to $861K in 2016.

Nonetheless, raising IT security budgets is only part of the solution, as the most staggering losses stem from the incidents involving third parties and their cyber-failures. SMBs had to pay up to $140K for incidents affecting infrastructure hosted by a third party, while enterprises lost nearly two million dollars ($1.8M) as a result of breaches affecting suppliers that they share data with, and $1.6M because of IaaS-providers’ insufficient levels of protection. 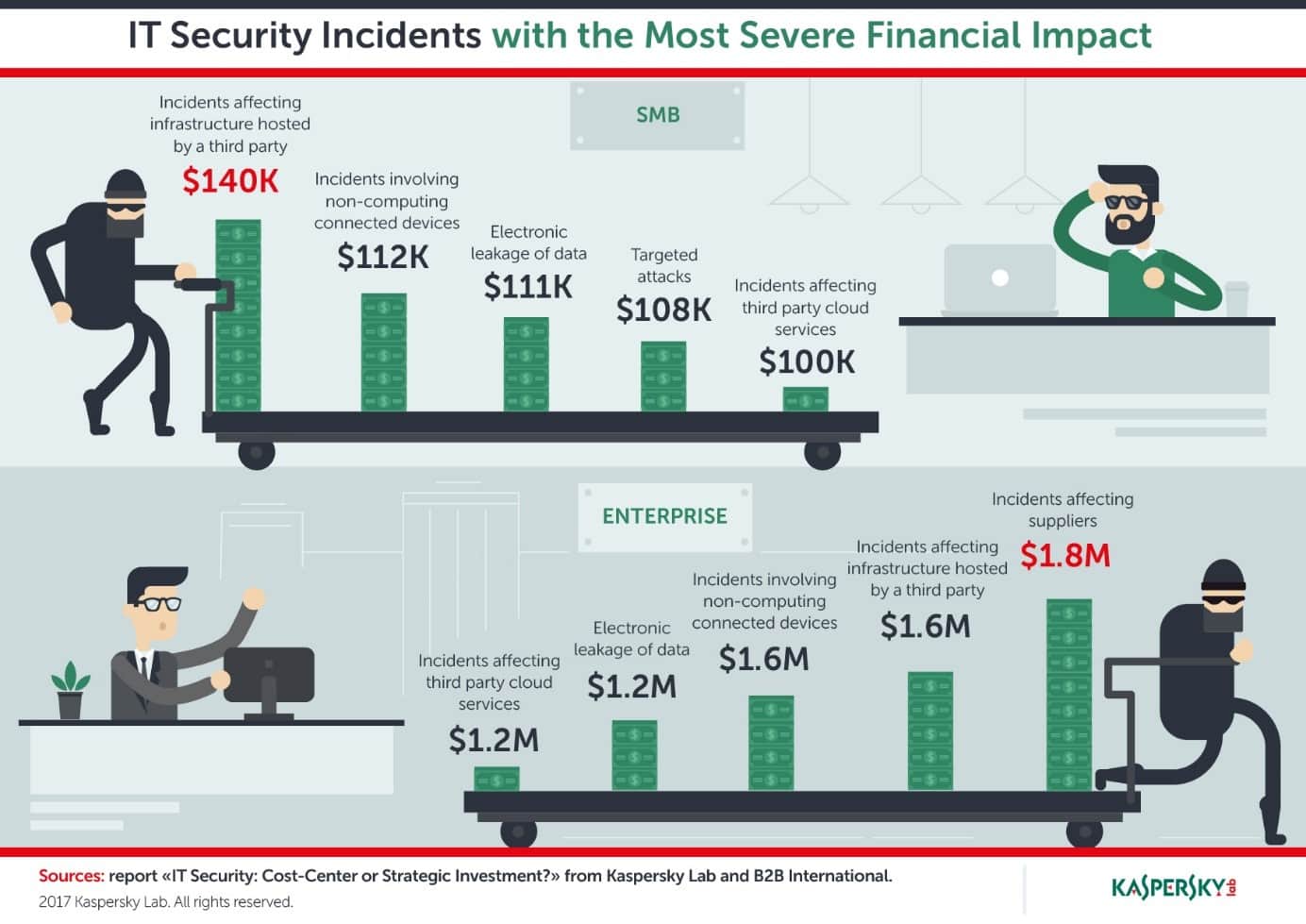 As soon as a business gives another organization access to its data or infrastructure, weaknesses in one may affect them both. This issue is becoming increasingly important as governments worldwide rush to introduce new legislations, requiring organizations to provide information about how they share and protect personal data.

‘’While cybersecurity incidents involving third parties prove to be harmful to businesses of all sizes, their financial impact on a company has the potential to result in twice as much damage. This is because of a wider global challenge – with threats moving fast, but businesses and legislation changing slowly. When regulations like GDPR become enforceable and catch up with businesses before they manage to update their policies, the fines for non-compliance will further add to the bill”, says Alessio Aceti, Head of Enterprise Business Division at Kaspersky Lab.

To help businesses with their IT security strategies, based on the industry threat landscape and specific recommendations, Kaspersky Lab introduces the Kaspersky IT Security Calculator. This business tool is an ultimate guide to the cost of IT security based on the average budgets being spent (by region, industry and company size), security measures, the major threat vectors, money losses and tips on how to avoid a compromise. The Kaspersky IT Security Calculator and the full report ‘IT Security: cost-center or strategic investment?’ can be found at this webpage.

From Shaking Their Hands to Paying Off Their Debts: Third party Cybersecurity Failures Cost Businesses the Most

Kaspersky
While more companies are investing in cybersecurity regardless of ROI (63% in 2017 compared to 56% in 2016), a new study from Kaspersky Lab and B2B International has found that the average cost of a cybersecurity incident is growing.