Giving Too Much Away? Most People Share Personal Information Online – And Young People Are Most at Risk

Sharing information or photos on social media platforms like Facebook and Instagram has become second nature for many. Butresearchfrom Kaspersky Lab has lift the lid on just how much personal data people are sharing in the public domain. The research shows that the majority (93%) of people share their information digitally, with 70% of these sharing photos and videos of their children and 45% sharing private and sensitive videos and photos of others. These habits are worse among younger generations, who are making large amounts of their personal information accessible to strangers.

Worryingly, almost half (44%) of Internet users make their information public, but once data has gone into the public domain, it can travel far beyond the control of its owners. One-in-five people admit that they share sensitive data with people they don’t know well, and with strangers, limiting their ability to control how their sensitive information will be used. Thus, people are exposing themselves to identity theft or financial attack by sharing financial and payment details (37%), scans of their passports, driving licenses and other personal documents (41%) or passwords (30%).

The findings are part of Kaspersky Lab’s My Precious Data: Stranger Danger report into people’s data sharing habits. The research found that people are not just sharing data, they are also sharing devices that store their precious data. In fact, one-in-ten (10%) have shared the PIN for accessing their device with a stranger and one-in-five (22%) have left their devices unlocked and unsupervised among a group of people. Furthermore, nearly a quarter (23%) have given their device to another person to use for some time.

“Over-sharing personal data with people and companies is a really dangerous habit to get into,” says Andrei Mochola, Head of Consumer Business at Kaspersky Lab. "In today’s online world, sharing information with others has never been easier and, in many ways, that’s what the Internet was created for. But by disclosing important and sensitive information with other people at the push of a button, you relinquish control over it, because you can’t be sure where that data is going, and how it will be used. Users are literally putting their precious data, and even the devices that store it, in the hands of others.”

The study furthermore shows that young people are the most likely to share private and sensitive photos of themselves with others – 61% of those aged 16-24 admit to this form of sharing, compared to just 38% of the over 55s. This pattern also extends to financial information, with two-fifths of young people sharing their financial and payment details (42% of 16-24 year olds) with others, compared to just 27% of 55+ year olds.

“While it’s completely unrealistic to expect Internet users to stop sharing photos, personal details and other information with each other, we do urge people to think twice before they share important information publicly online. We also encourage all Internet users to put safety measures in place to protect their data, and their privacy, should their devices or data fall into the wrong hands,” Andrei Mochola continues.

For further information on the research, please see the report: “Stranger danger: the connection between sharing online and losing the data we love”. 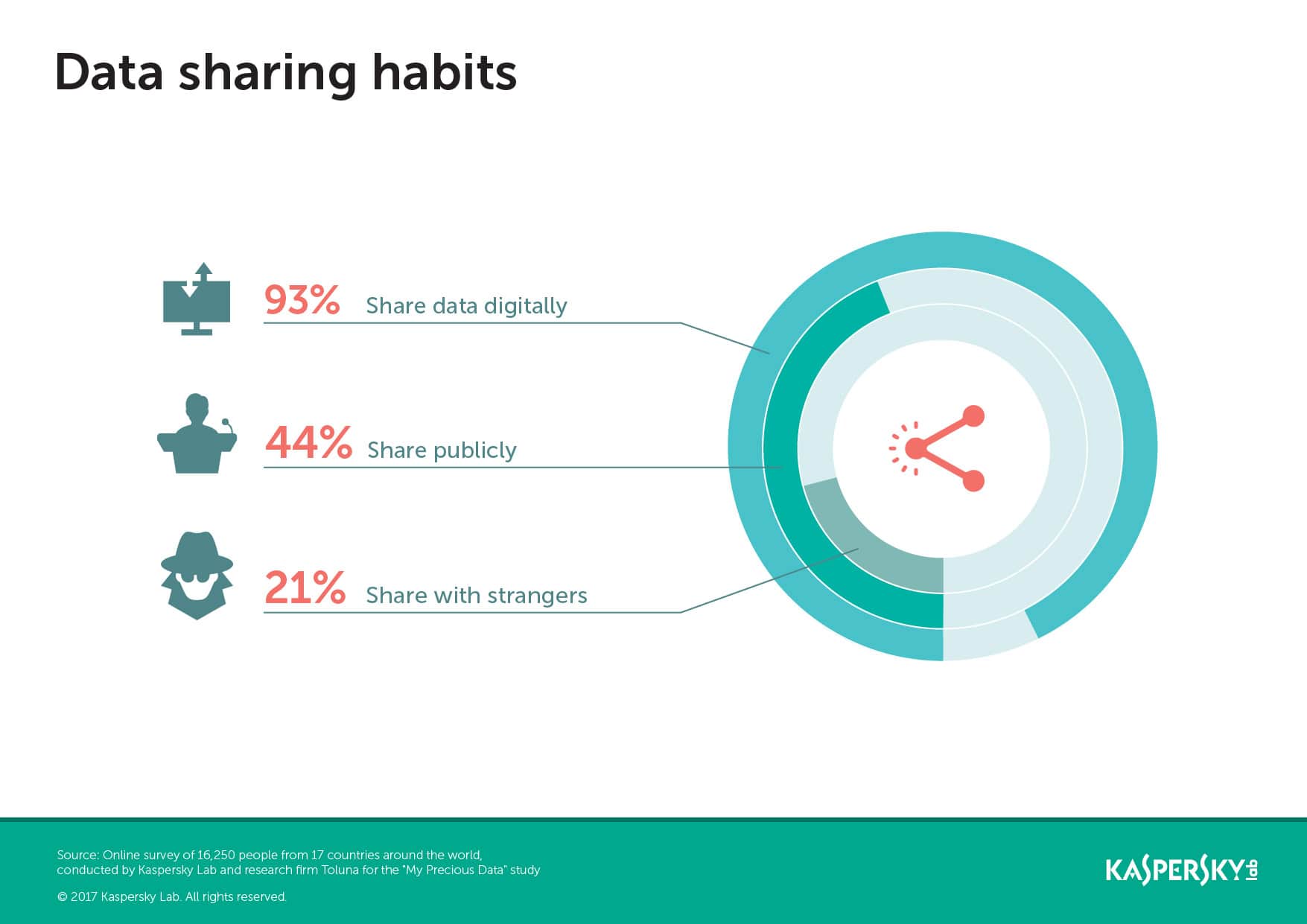 Giving Too Much Away? Most People Share Personal Information Online – And Young People Are Most at Risk