According to the results of a study conducted by Kaspersky Lab and B2B International, a DDoS attack on a company’s online resources might cause considerable losses – with average figures ranging from $52,000 to $444,000 depending on the size of the company.

According to the results of astudyconducted by Kaspersky Lab and B2B International, a DDoS attack on a company’s online resources might cause considerable losses – with average figures ranging from $52,000 to $444,000 depending on the size of the company. For many organizations these expenses have a serious impact on the balance sheet as well as harming the company’s reputation due to loss of access to online resources for partners and customers.

The total costs reflect several problems. According to the study, 61% of DDoS victims temporarily lost access to critical business information; 38% of companies were unable to carry out their core business; 33% of respondents reported the loss of business opportunities and contracts. In addition, in 29% of DDoS incidents a successful attack had a negative impact on the company’s credit rating while in 26% of cases it prompted an increase in insurance premiums.

The experts included the costs of remediating the consequences of an incident when calculating the average sum. For example, 65% of companies consulted with IT security specialists, 49% of firms paid to modify their IT infrastructure, 46% of victims had to turn to their lawyers and 41% turned to risk managers. And these are only the most common expenses.

Information about DDoS attacks and subsequent disruption to the business often becomes public, adding to the risks. 72% of victims disclosed information about a DDoS attack on their resources. Specifically, 43% of respondents told their customers about an incident, 36% reported to representatives of a regulatory authority, and 26% spoke to the media. 38% of companies suffered reputational loss as a result of a DDoS attack, and almost one in three affected organizations had to seek the assistance of corporate image consultants.

“A successful DDoS attack can damage business-critical services, leading to serious consequences for the company. For example, the recent attacks on Scandinavian banks (in particular, on the Finnish OP Pohjola Group) caused a few days of disruption to online services and also interrupted the processing of bank card transactions, a frequent problem in cases like this. That’s why companies today must consider DDoS protection as an integral part of their overall IT security policy. It’s just as important as protecting against malware, targeted attacks, data leak and the like,” said Eugene Vigovsky, Head of Kaspersky DDoS Protection, Kaspersky Lab.

Kaspersky Lab technology provides continuous access to its clients’ online resources even during complex, lengthy and previously unknown types of DDoS attacks. Kaspersky DDoS Protection switches client traffic to Kaspersky Lab cleaning centers for the duration of the attack, filtering malicious traffic so that the client only receives legitimate requests. This prevents infrastructure and services from being overloaded. Read more about Kaspersky DDoS Protection work principles. 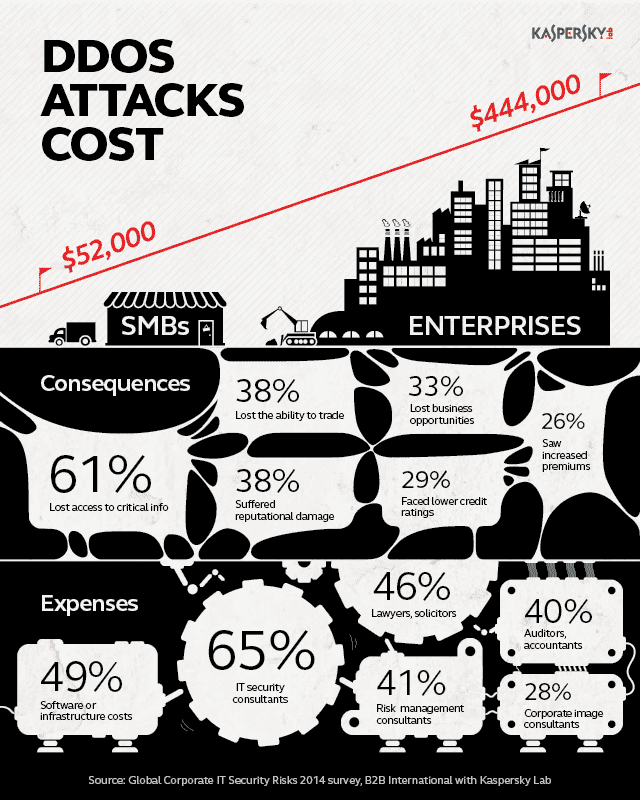 Kaspersky
According to the results of a study conducted by Kaspersky Lab and B2B International, a DDoS attack on a company’s online resources might cause considerable losses – with average figures ranging from $52,000 to $444,000 depending on the size of the company.