How the tests were performed

Controlling the applications used within a corporate environment allows businesses to address two major issues. It helps improve employee efficiency by restricting the use of non-work-related programs and blocks the launch of dangerous and suspicious applications, strengthening the corporate security system against cyberthreats, including advanced persistent threats (APT). When assessing the efficiency of the application control tools offered by the world’s leading vendors, Dennis Technology Labs divided their tests into two groups.

In the first set of tests the products had to block all unauthorized and illegitimate programs. They were assessed on how accurately they identified programs used in the LAN, and their ability to correctly discern between authorized and unauthorized programs. The specialists also evaluated the flexibility of the solutions’ security policies, how they affected employee work practices and business processes in a simulated environment, as well as the completeness of the activity reports produced by the products.

The second set of tests evaluated the quality of protection against advanced persistent threats. The solutions had to ensure that only legitimate software was installed, that all unwanted pre-installed applications were blocked, and any threats associated with the use of vulnerable applications were identified and eliminated. Moreover, this had to be done without interfering with any business processes. Testing was conducted in Default Deny mode, meaning only those applications in a whitelist were allowed to launch. This enabled Dennis Technology Labs to examine and ultimately confirm the effectiveness of the Default Deny mode compared to the Default Allow mode which allows all programs to be launched except those defined in a blacklist.

The corporate security solutions were awarded points for each stage of the testing. The test lab’s specialists assigned weights to each test depending on its importance to business processes. The total scores for both groups of tests were compared with the results of an abstract ideal solution. The specialists then expressed each solution’s performance results as a percentage of the unattainable ideal. The final result was calculated as the mean of the results from the first and second group of tests.

Kaspersky Endpoint Security 8 for Windows immediately set the pace, leading from the very start of the testing process and coming closer than any of the other competitors to the ideal solution, as defined by the experts at Dennis Technology Labs. The Kaspersky Lab product earned a score of 75% in the first group of tests, and 67% in the second, resulting in an overall average of 71% – almost double that of the other products in the test.

In particular, during the test to identify vulnerable applications and block their use in the second stage of testing, Kaspersky Endpoint Security 8 for Windows scored an impressive 170 points, outstripping its closest rivals by a staggering 8.5 times.

In summing up the results, the experts at Dennis Technology Labs stated that Kaspersky Endpoint Security 8 for Windows was the most functional solution for application management and, in particular, noted its user-friendliness. 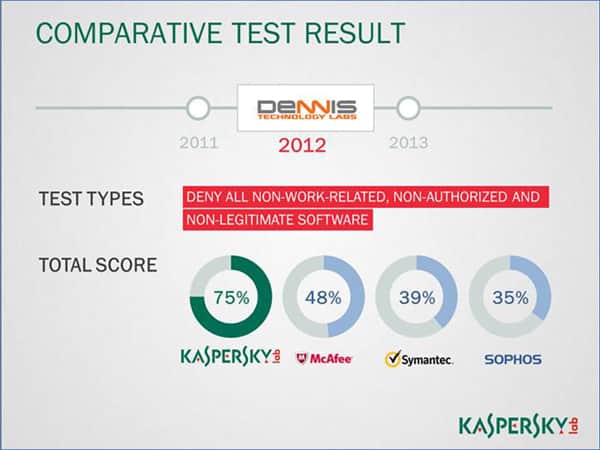 "Application management plays a major role in ensuring a company’s security, and today many vendors offer the relevant technologies integrated in their corporate products. Choosing a solution that best suits your business needs is by no means an easy task, which is why the results of the latest tests conducted by Dennis Technology Labs may be of particular interest to those companies whose priorities include security against APT attacks and the management of non-work-related applications. We at Kaspersky Lab are very pleased that our corporate solution has demonstrated such an impressive result, outperforming the competition by a wide margin. This achievement once again demonstrates how effective Kaspersky Lab’s technologies are. Furthermore, now that the new Kaspersky Endpoint Security for Business platform has become available,
providing even broader application control capabilities, we expect our products to achieve only the very
best results in future tests."