I woke up to find a Band-Aid on my hand. It was covering a small wound between the thumb and the index finger. That was when I had a WTF moment. Where was I yesterday and what happened to me?

Slowly, a sequence of events started to build up in my head: flashes, crowd cheering, acrid smell of the antiseptic, and a tattooed man with a special injector.

“Well, there’s no way back. You wanted to change the world, then go for it!” I thought. And I ended up with an NFС biochip under my skin in mere minutes.

Yes, per Hollywood, that’s how it’s supposed to look:

In reality, it is not so cool and easy, and that was my first discovery in this experiment. In order to implant a chip, one needs a special injector with a needle size of 3-mm-ish. Which is helluva lot.

No anesthesia was given. The piercing master gave a radiant smile and said something like “It wouldn’t hurt if you had some balls. Here we go!” While trying to understand what was just said to me, I found my hand was already being injected. I thought I could actually hear the nasty sound of a steel needle doing its job under my skin. 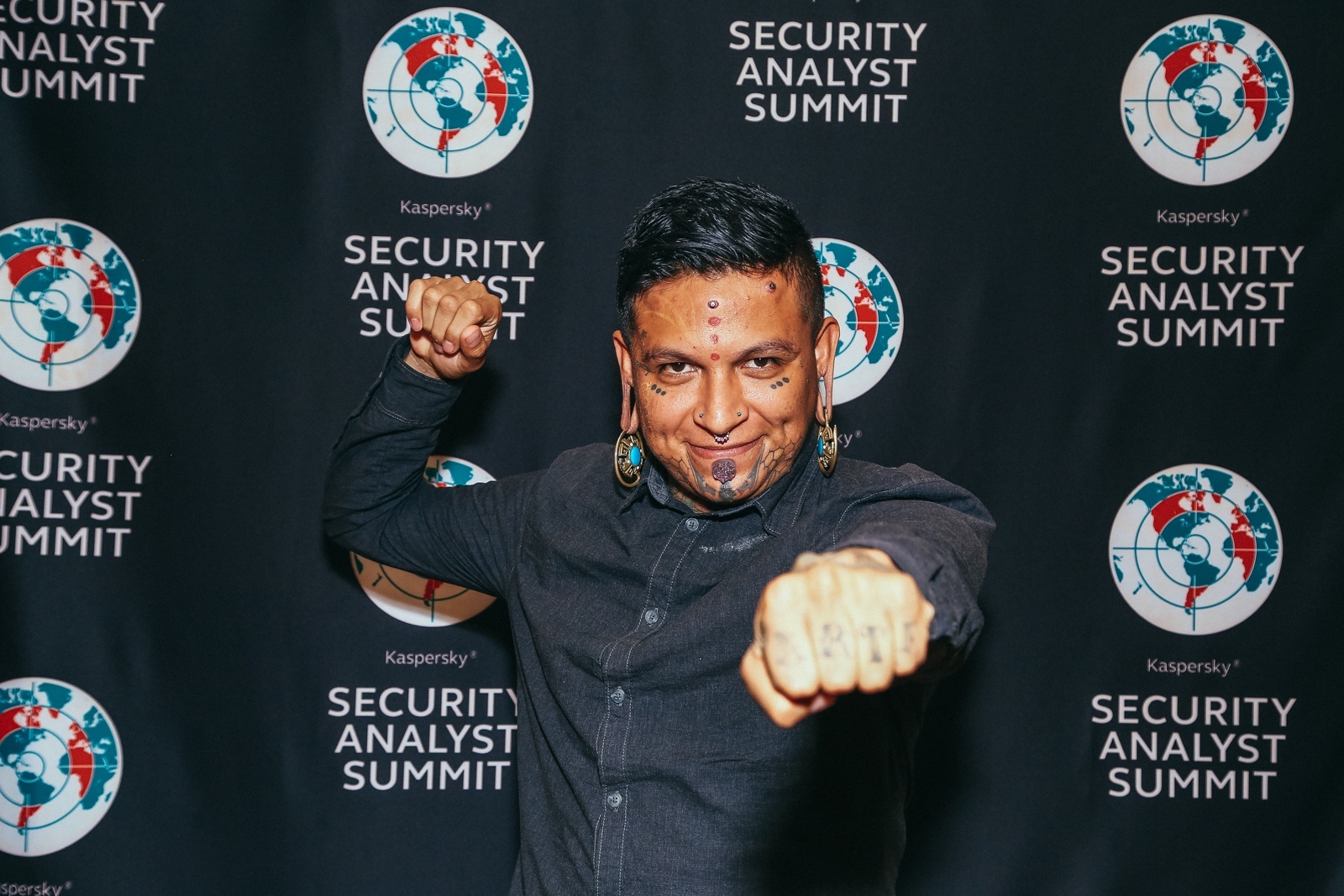 The entire procedure took me less than 5 seconds. If comprehended in terms of pain units, it could be compared to the process of drawing a blood sample — from your fingertip, from your vein, and from your arse, simultaneously. So local anesthesia (spray, at least!) would be cool to have next time.

And yes — there will definitely be next time. Simply because now it is quite obvious that the list of problems associated with this technology is an endless roll of paper stretching far beyond the edge of ‘the galaxy far, far away’. In order to solve most of them, we would need to develop the next gen of chips, which would be upgraded based on, inclusively, the feedback from the early adopters.

A side note for those who have been out of the loop and hearing about it for the first time: Several days ago, at #TheSAS2015 conference where we gathered the world’s best infosec experts and gurus, several Kaspersky Lab emloyees got chips implanted under their skin.

There were two volunteers: myself and Povel Torudd, head of the European PR department of Kaspersky Lab. He is Swedish but currently resides in London. 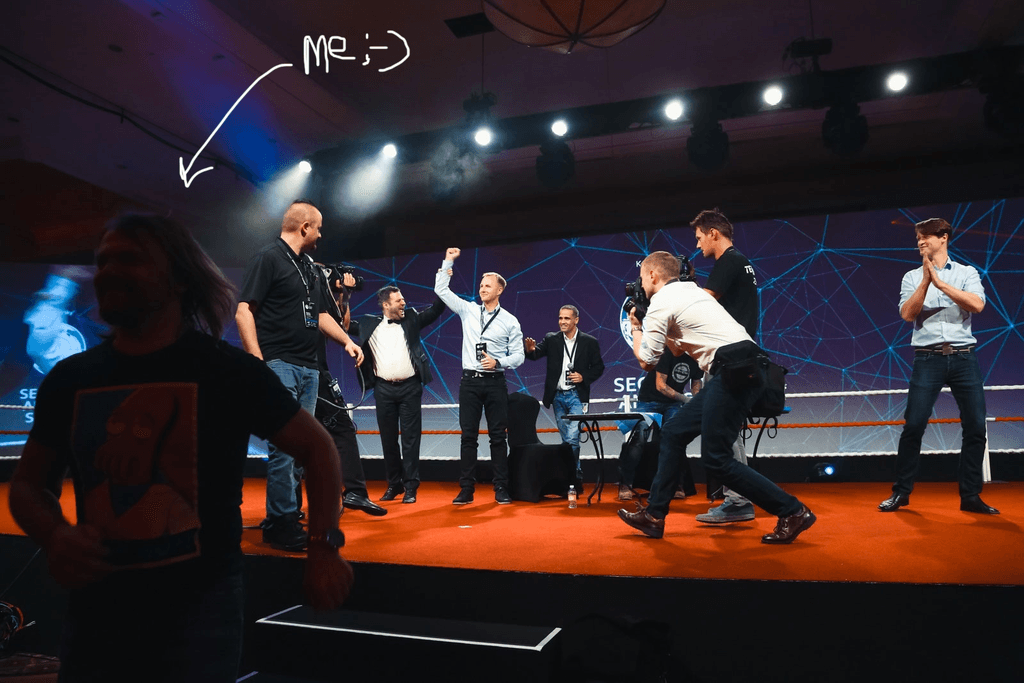 What are chips like? A chip is a tiny (12 x 2 mm or 0,5 x 0,08 inch) microdevice capable of storing up to 880 bytes, which allows a person to interact with the surrounding tech, including smartphones and their apps, laptops, electronic locks, public transport pay gates, and other examples of the IoT world. All interactions are absolutely wireless and touch-enabled.

The decision to get ‘chipped up’ was made, as usual, in a pub while boozing and discussing the evolution of the Internet.

I might be, in some respect, the first ever Russian cybernetic organism backed up by a huge organization with an immediate interest in the results of this trial.

Me and Povel decided to get ‘chipped up’ some 3 months before #TheSAS2015. It was classic: We were sitting in a pub, drinking beer, and discussing the evolution of the Internet, including its obvious benefits and a long dragging chain of drawbacks like obsolete tech that’s still here just because ‘One does not simply walk into Mordor.’ The best-ever wording offered by Neil Stevenson in “Cryptonomicon”:

This is simply because the old technology is universally understood by those who need to understand it, and it works well, and all kinds of electronic and software technology has been built and tested to work within that framework, and why mess with success, especially when your profit margins are so small that they can only be detected by using techniques from quantum mechanics, and any glitches vis à vis compatibility with old stuff will send your company straight into the toilet.

For instance, we’ve been using passwords to authenticate ourselves for ages, but now they are good for nothing — a fact which is known to all who belong to the infosec world.

We were conversing until late at night and we made a deal. We decided that we should take a stand and change the world for the best, in a radical and public fashion, by demonstrating innovation of our own example (provided it is not bound to some 30-year-old limitations). We were not forced or asked to implant chips and we are not paid for participation in this experiment. The whole thing was voluntarily.

I am seriously concerned about the synergy between a live organism and a computer – which will be unavoidable in the future – and which make bionics a very promising branch of tech. The problem is that many modern technologies are, unfortunately, developed with total negligence of security and privacy.

The examples are abundant: David Jacoby, one of Kaspersky Lab European researchers hacked his own home and it took him a very short time to do it.

There is a flood of appliances which are connected without a thought of security #theSAS2015 https://t.co/ML61uW4ErZ pic.twitter.com/DicNCI0GVK

However, a connected coffee machine or Smart TV cannot be compared to a human organism. I enlisted for this experiment to both understand the merits of the technology and explore its drawbacks and vulnerabilities, and then to conceptualize methods of protection and develop them while we still have time.

What I would most eagerly avoid is my descendants becoming victims of bionical cybercriminals — and those are bound to emerge, sooner or later, as the stats prove it very feasible.

In theory, the case for chips is limited by imagination. It could be used to open offices, homes and cars, manage digital wallets, unblock devices without a need of passwords (as the chip itself can be an identifier). If the tech evolves substantially, passwords just may become extinct.

This is the first digital entry stored in my body #theSAS2015 #NFC pic.twitter.com/7szjBbT45t

The chip could also be used as an encrypted storage for critical personal data, including medical records, biography, passport data, etc. It goes without saying that, if this information is to be disclosed, you should know who is accessing it, when and why – minding privacy, of course.

For myself, I have defined five objectives of this experiment:

Hereby I promise to apply my full effort to answer 100% of all questions you would ask here, without limitations. I think that’s the most crucial objective to reach, as truth is sprout in discussion — so let’s argue and debate, under one condition: mutual respect of all opinions and facts to support your standpoint. Otherwise, rudeness and trolling is a path to being banned.

Me talking to office security ppl explaining how the biochip in my hand would be used as office key #BionicManDiary pic.twitter.com/l99jgYdwld

So, as one of my great compatriots, the first spaceman, Yuri Gagarin, said once: “Poehali!”

The next blog post will be devoted to the topic of choosing a right place to implant a biochip, as well as my first experience in self-programming.

P.S. All blog posts and tweets can be searched in causal networks by the #BionicManDiary hashtag.

One dollar lesson: defend your buck from online fraud