It’s one thing for an Internet protection suite to claim it has first-class levels of protection, but it is quite another thing when a security platform is found by independent experts to provide complete, impregnable protection. The latter is the case with Kaspersky Lab’s Internet Security 2013, which recently earned a five-star rating from independent security analyst MRG Effitas. 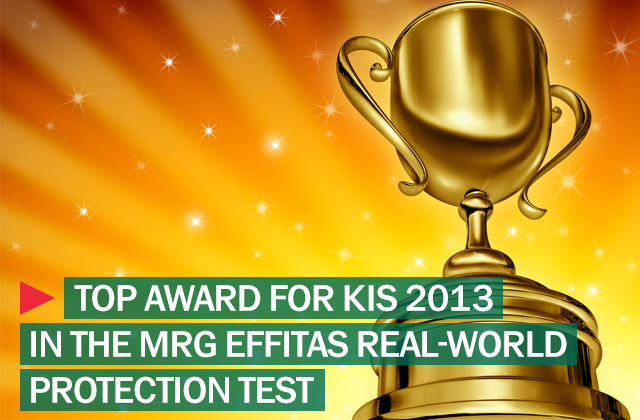 In the recently completed MRG Effitas Real World Protection Test for Q1 2013, Kaspersky Labs’ solution detected and blocked 100 percent of the 585 threats thrown at it by the MRG Effitas cyber security experts. These threats were those that ordinary users face everyday on the Internet, including backdoors —programs that can remotely control the user’s computer — financial malware designed to steal financial information, ransomware and malicious programs with integrated rootkit functionalities. Testing was conducted on computers running Windows 7 SP 1, 32 bit and set up with a suite of widely used applications that are regularly targeted and exploited by attackers. Of the 16 antivirus suites put to this test, Kaspersky Labs’ Internet Security 2013 was one of just three that caught all of the 585 attacks, earning the five-star award.

“To receive the highest MRG Effitas award is a worthy achievement, but more than that these test results are a kind of marker which indicates a high-quality security solution.”

“To receive the highest MRG Effitas award is a worthy achievement, but more than that these test results are a kind of marker which indicates a high-quality security solution,” said Oleg Ishanov, the director of Kaspersky’s of the anti-malware research unit. “Any protection product must be able to safeguard the user from the real and dangerous threats such as backdoors, financial malware, ransomware, rootkits, etc. A product which cannot do this can hardly be called a security solution.”

This isn’t the first time independent analysts have awarded Kaspersky’s Internet Security 2013 with top honors for its protection capabilities, having earlier this year taken home awards by putting up sterling performances in similar real-world tests conducted by AV-Comparatives and Dennis Technology Labs. Kaspersky Internet Security 2013 has also been highly acclaimed by other well-known testing laboratories such as AV-Test.org, Matousec.com and others.

There’s no confirmation like that of outside experts, and Kaspersky’s continued excellence in independent tests is peace of mind that consumers can rely on when choosing a protection platform.

How to Be on the Safe Side When Clicking Links on the Internet?

When surfing the Internet we click hundreds of links in search results and on web resources. How can you identify whether links are malicious or not? How can you be