There’s been something of an uneasy consensus among experts that Apple’s iOS platform is the most secure option among mobile operating systems almost exclusively because of the closed-off nature of the App Store and the very much open nature of its primary competitor, the Google Play store. However, our friends out in Cupertino, California premiered iOS 7 at their World Wide Developers Conference yesterday, and the latest iteration of their iPhone software includes a couple pragmatic new features that will improve iPhone security from within, rather than through its application marketplace. 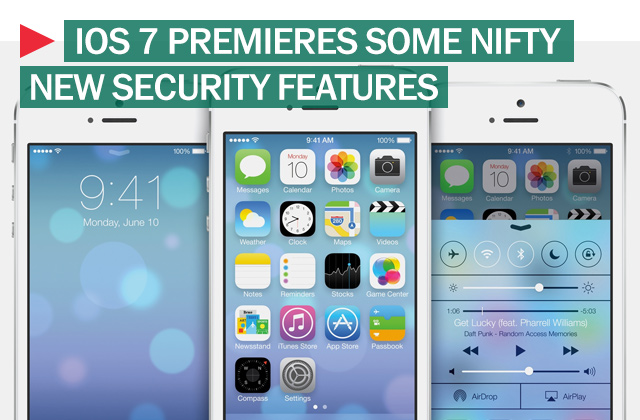 A now-stock iOS feature called ‘Find My iPhone’ that uses GPS to let user pinpoint the exact location of a misplaced, lost, or stolen iPhone simply by signing into the iCloud was something of a monumental security feature. The problem was, any phone-thief with half a brain would immediately perform a factory reset so that the phone’s legitimate owner couldn’t track the device down (unless this thief was interested in mining the device for personal information). In its new iOS 7 platform, Apple has made the factory reset process far more complicated with a new feature called activation lock.

With the Activation Lock feature enabled, users will reportedly need their Apple ID and password in order to access the phone, even if a thief tries to perform a factory reset.

The latest iteration of their iPhone software includes a couple pragmatic new features that will improve iPhone security from within, rather than through its application marketplace.

The other cool new feature is called iCloud Keychain. According to Wired, this new feature allows users to store the passwords for their various iDevices in the iCloud and sync these passwords across trusted Apple devices. iCloud Keychain will reportedly store credit card data as well. The passwords and other information will be stored in a strongly encrypted format (256 bit AES encryption). Apple’s password management feature also issues recommendations for users on how to create stronger passwords.

While password management is by no means new or novel (security companies have had password management systems for years), this is no doubt good news for Mac users, given Apple’s inclination toward developing its own, Apple compatible products and features.

We obviously recommend that Apple users make use of any feature that improves their security. The activation lock upgrade is very cool and we are excited to try it out. The iCloud Keychain is a definite upgrade too, but it’s not perfect. Apple seems heavily invested in ensuring that their users only use Apple devices. A large number of iPhone users are also PC users, which means that the iCloud Keychain could present compatibility issues. For those of you, like me, that have an iPhone and a PC, you’ll still want to use some sort of password management tool.

Targeted attacks gain popularity as a means of cyber-espionage. They get more complex, use sophisticated algorithms and act more stealthily than ever. Even U.S. President Barack Obama voiced his concerns