It’s summer, and you’re probably – hopefully – traveling a bit. And most likely, you’re not going device free. So as you drag your laptop around with you to stay connected while you’re on the road, know that the dangers of having your system compromised are never greater than on these seemingly carefree days. Wireless networks are often insecure, and are notorious havens for attackers, who hang out in coffee shops, hotel swimming pools and anywhere else people congregate to the closest Internet connection, as they are easy targets to breach systems anonymously and steal personal data.

As you drag your laptop around with you to stay connected while you’re on the road, know that the dangers of having your system compromised are never greater than on these seemingly carefree days.

There are commonsense ways to avoid the pitfalls of these dangers – never using unsecured Wi-Fi networks unless absolutely necessary, and never logging into financial accounts on public networks, even secure ones, top the list. Right up there is having robust security for your system. To that end, Kaspersky Lab recommends its Kaspersky Internet Security 2015. It has features geared specifically toward keeping your system secure while you’re on the go. 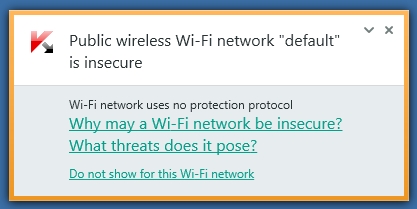 Among these features is its Wireless Network Connection Security Verification, which verifies the security of Wi-Fi connections and alerts users of potential threats like vulnerable network connections or the transmission of unsecured passwords. KIS 2015 also has what it calls its Intelligent Service for Wi-Fi Connection Adjustment, which gives home users guidance on how to adjust their security settings to ensure maximum protection, and gives users on public networks risk assessments for the networks they are connecting to.

What’s wrong with public hotspots and how to connect safely.

And if you absolutely do have to login into your bank and credit card accounts on vacation, Kaspersky’s Safe Money protects your online transactions by verifying the security of the website, your system and, of course, the connection you are using. Traveling with kids? Kaspersky’s got you covered there too – KIS 2015 offers easy-to-use, fine-grained parental controls to allow your kids to access what you want them to while keeping them away from what you don’t want them spending time on.

Quick Tips For a Safe and Secure Vacation

Once Upon A Time…