Cybercriminals are constantly on the lookout for new ways to attack companies. In the past few years, they have increasingly resorted to business e-mail compromise (BEC) attacks that target corporate correspondence.

What is a BEC attack?

A BEC attack is defined as a targeted cybercriminal campaign that works by:

Usually, the actions relate to transferring funds to criminals’ accounts or sending confidential files, but not always. For example, our experts recently encountered a request that appeared to come from a company’s CEO, with instructions to send gift card codes in text messages to some phone number.

Although BEC attempts often employ phishing-style tricks, the attack is somewhat more sophisticated, with one foot in technological expertise and the other in social engineering. Moreover, the techniques used are one-of-a-kind: The messages contain no malicious links or attachments, but the attackers try to trick the mail client, and thus the recipient, into considering the e-mail legitimate. It’s social engineering that has the starring role.

A careful harvesting of data about the victim typically precedes an attack; the perpetrator later uses it to gain their trust. The correspondence may consist of as few as two or three messages, or it can last several months.

On a separate note, multistage BEC attacks, which combine various scenarios and technologies, are worth mentioning. For example, cybercriminals might first steal the credentials of an ordinary worker using spear phishing, and then launch an attack against a higher-ranking employee of the company.

Quite a few BEC-attack scenarios already exist, but cybercriminals are forever inventing new ones. According to our observations, most cases are reducible to one of four variants:

BEC attacks are also developing from a technological point of view. If in 2013 they used the hijacked e-mail accounts of CEOs or CFOs, today they rely increasingly on successfully imitating another person through a combination of technical subterfuge, social engineering, and inattentiveness on the part of the victim. Here are the basic technical tricks they employ:

We respect the confidentiality of our clients, so the following are not real messages but examples that illustrate some common BEC possibilities.

The attacker tries to establish contact with a potential victim, posing as their boss. So that the recipient does not try to contact the real senior officer, the scammer highlights both the urgency of the request and the boss’s current unavailability through other communication channels: 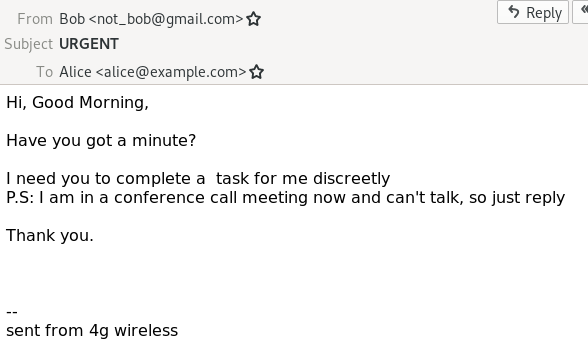 A close look reveals that the name of the sender (Bob) does not match the real e-mail address (not_bob@gmail.com). In this case, the attacker faked only the name displayed when the message is opened. This type of attack is especially effective on mobile devices, which by default display only the sender’s name, not their address.

The cybercriminal seeks out an employee in Accounting who is authorized to alter bank details, writing:

Here, the message header is changed so that the client displays both the name and the e-mail address of the legitimate employee, but the attacker’s e-mail is given as the reply-to address. As a result, replies to this message are sent to not_bob@gmail.com. Many clients hide the reply-to field by default, so this message appears genuine even on close inspection. In theory, an attack using such a message could be stopped by correctly configuring SPF, DKIM, and DMARC on the corporate mail server.

The attacker, pretending to be a manager, impresses upon the employee the need to cooperate with a bogus lawyer, who will supposedly soon be in touch:

Here, the sender field contains not only the name, but also the spoof e-mail address. Not the most cutting-edge technique, but still many people fall for it, especially if the real address is not displayed on the recipient’s screen (for example, simply because it is too long).

Another cybercriminal tries to start up an e-mail exchange with a company employee:

This is an example of the lookalike-domain method, which we mentioned above. The scammer first registers a domain name similar to a trusted one (in this case, examp1e.com instead of example.com), and then hopes the recipient doesn’t notice.

A number of recent news reports have highlighted BEC attacks causing significant damage to companies of various shapes and sizes. Here are a few of the most interesting:

How to handle BEC attacks

Cybercriminals use a fairly wide range of technical tricks and social-engineering methods to win trust and carry out fraud. However, taking a range of effective measures can minimize the threat from BEC attacks:

Kaspersky solutions with content filtering specially created in our lab already identify many types of BEC attacks, and, our experts continually develop technologies to protect further against the most advanced and sophisticated scams.

The tracking pixel in service of cybercrime

How to deal with internal BEC

MonitorMinor is one of the most dangerous spying apps for Android out there. Here’s why.