“Snapchat is a new way to share moments with friends,” reads the opening sentence of the temporary photo-sharing application’s “about us” page. The description is just vague enough to technically reflect reality, but it’s a pretty lame explanation for an app that’s allegedly used by teens as a medium to share discreet (read: naked) photos with one another. 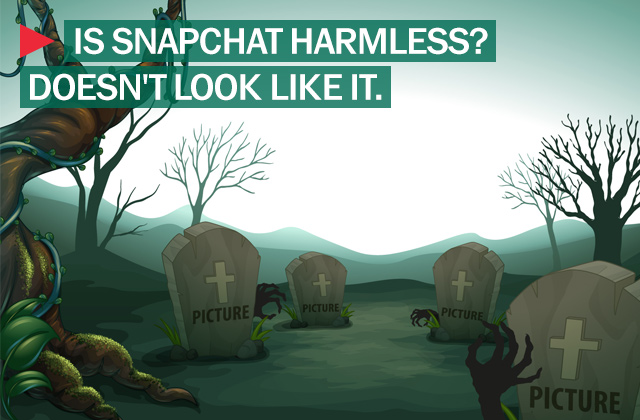 Even the most innocent observers would likely agree that Snapchat, with its default photo and video delete feature, is the perfect app for sexting, regardless of how naïve those four young and promising Stanford men are or what they had in mind when developing Snapchat.

I don’t want to overplay the whole sexting angle too much on this because in this brave new world of smartphones with adaptive cameras and constant Internet connections, there is really nothing anyone can do to stop these crazy kids from sending racy self-pics around amongst themselves. It’s already easy and common enough to do this via text, email, twitter, Facebook, or any number of other mobile social apps, so I’m not really sure what all the fuss and fake-outrage is about.

Even the most innocent observers would likely agree that Snapchat, with its default photo and video delete feature, is the perfect app for sexting.

If indeed its creators had it in mind when developing Snapchat, and it’s hard to imagine that they didn’t, then maybe they should be heralded for attempting to produce an application that facilitates this sort of sharing in a less permanent way.

Really though, there are plenty of people out there – most of them probably – that use Snapchat as frivolously as they use the other social networks. Frankly, I’ve only personally seen the service used to send funny videos, which compels me to wonder why the videos need to be deleted so quickly and forever (but who am I to question Stanford men?).

A Snapchat representative reportedly had this to say: “There’s a reason why it’s illegal to record a phone call without permission – and it’s not because everyone is having phone sex.”

In fact, a recent survey carried out by Survatta, a San Francisco-based online marketing firm, found that Snapchatters are actually more likely to sext the old-fashioned way: via text message. Survata interviewed 5,475 18-29 year old Americans. Among the 715 admitted Snapchatters, only 13 percent admitted to sexting on the platform. In a separate sample, 26 percent of non-Snapchatters said that they’d sexted via text message.

Snapchat is a good, non-permanent way to communicate.

Like anything, the number of ways you can use Snapchat is dependent upon how clever, creative, and imaginative you are. You could Snapchat to cheat on a test. You could Snapchat to secretly communicate with your mistress. You could use snapchat to help deal drugs. The unscrupulous list goes on, but if we really thought about it, I bet we could find plenty of positive uses as well. For one, depending on how secure the service is, it could be the perfect tool for activists inside authoritarian regimes sending sensitive information between one other. Really, Snapchat is a good way, non-permanent way to communicate.

The good thing about Snapchat at first glance is obviously that Snapchats (is that what we’re calling them?) disappear forever after a predetermined amount of time. That is, unless the recipient takes a screen-grab. Rest assured though, if someone does screen-grab your Snapchat, the application will let you know! Unfortunately, there is nothing you can do to stop that ex-boyfriend-that-bought-you-a-promise-ring-so-you-thought-you’d-be-together-forever from taking that  screen grab and sharing with all his randy buddies, or worse, posting online, where it will remain, until long after all of us are dead.

The bottom line though is good, bad, or indifferent Snapchats, it all comes down to two things: screengrabs and trust. If you’re using Snapchat to communicate with someone you can really trust, then it seems perfectly safe and Snapchat away. On the other hand, if you’re using Snapchat to send a picture of the stash spot to someone you think is your associate-in-crime but who is actually an undercover police officer, then it’s probably not a safe way to communicate.

New technological business trends are almost always about investment. First you pay money and after that, if you get lucky, you make your employees happier, achieve tighter security of business