There is no F1 racetrack in Moscow, nevertheless, it was easy to hear the engines roar behind the Kremlin walls this Sunday as the Moscow City Racing show came to Moscow once again. F1 cars and other automotives were cruising through the heart of the city, pleasing all motorsport lovers. Kaspersky Lab sponsors the show, so it’s only natural that we’ve brought Scuderia Ferrari to the show, as we also sponsor the Ferrari F1 team. 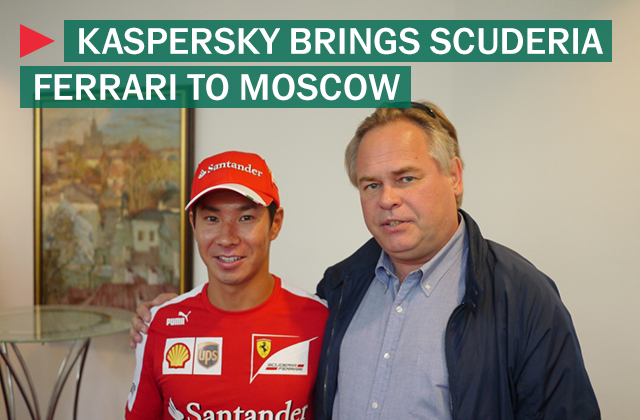 Alex Moiseev, Kaspersky Lab Managing director, Europe (a part-time racer himself), and Eugene Kaspersky told journalists about this important partnership. Between handshakes with the Ferrari newcomer, Kamui Kobayashi, and the race itself, the Kaspersky Lab founder shared his experience about working with the famous Italians.

“Ferrari – are a very honest partner. When we first contacted them, they told us, “Hey, you have no experience in motorsport at all! Let’s develop our partnership gradually. Let’s start with small sponsor package, so you can measure its effectiveness. If you like it – we will expand it. If you don’t – we will help to minimize loss,” – recalls Kaspersky.

We are proud of Ferrari’s choice of Kaspersky Lab products to protect their computers in their factory and paddocks.

It began four years ago; we’ve enjoyed our partnership with Ferrari and are constantly developing it. You can see Kaspersky logo on Scuderia Ferrari racecars, suits and helmets. And we are proud of Ferrari’s choice of Kaspersky Lab products to protect their computers in their factory and paddocks. Alex Moiseev stresses that Ferrari’s choice has no connection with the sponsorship story. “Ferrari’s technical director is very particular and considers no marketing incentives. For example, Ferrari’s sponsor from the logistics world is not Ferrari’s logistic supplier. So they have chosen our protection because of its quality.” Eugene Kaspersky added, that the benefit of Ferrari choosing Kaspersky was the company’s ability to produce tailor-made versions of a protection solution without sacrificing update speed and ease.

Journalists bombarded Eugene and Alex with questions. Do you want to support other motorsport events? Are you going to invest in local, Russian F1 drivers? Do you plan to sponsor other F1 teams? “Formula 1 rules don’t prohibit multiple team sponsorships, but we don’t plan to do that. We are with Ferrari and only Ferrari,” replied Moiseev as he ran off to warm up his car for the Ferrari 458 Challenge. “Each of our sponsorship projects is unique. The Commonwealth Antarctic Expedition by seven women, the Jackie Chan concert in Beijing, the Scuderia Ferrari partnership – they’re all wildly different. And our next project will be very special as well,” added Kaspersky.  The company is willing to help promising young racers, but it is very targeted support. Formula 1 and Kaspersky Lab are still waiting for such a hero to come along. 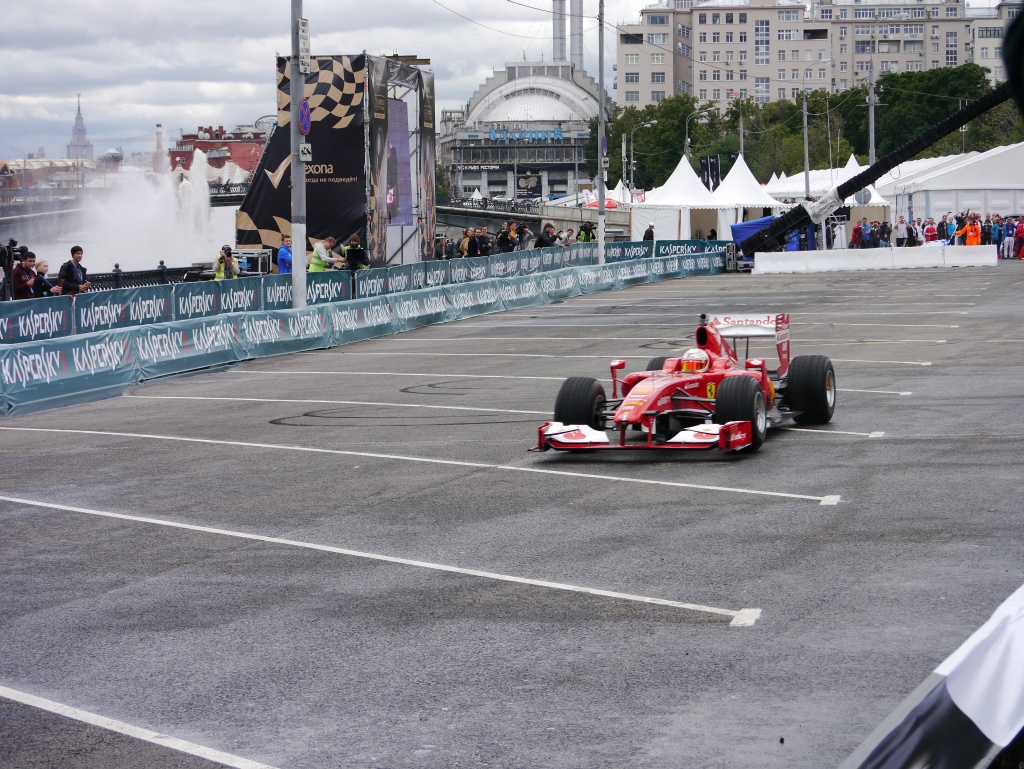 “Listen to that!” said Kaspersky, interrupting his answer for a second as you can hear a powerful motor roaring half a mile away, and this hints that warm up laps have started. Both speakers and listeners hurry to the stands – to spend their own day at the races.

A three-hour long show included not only exhibition performance of Formula 1 cars, but also appearances of the McLaren 12C Spider, Nissan Nismo, Citroen Total Abu Dhabi World Rally Team and others.  Quite unusual for this type of race, the audience experienced a real F1 car crash –Kobayashi’s car slipped on a wet road. Quite luckily, Kamui wasn’t hurt and managed to finish his race using a second car.

We managed to visit the Ferrari paddock before the incident, where both cars were kept. 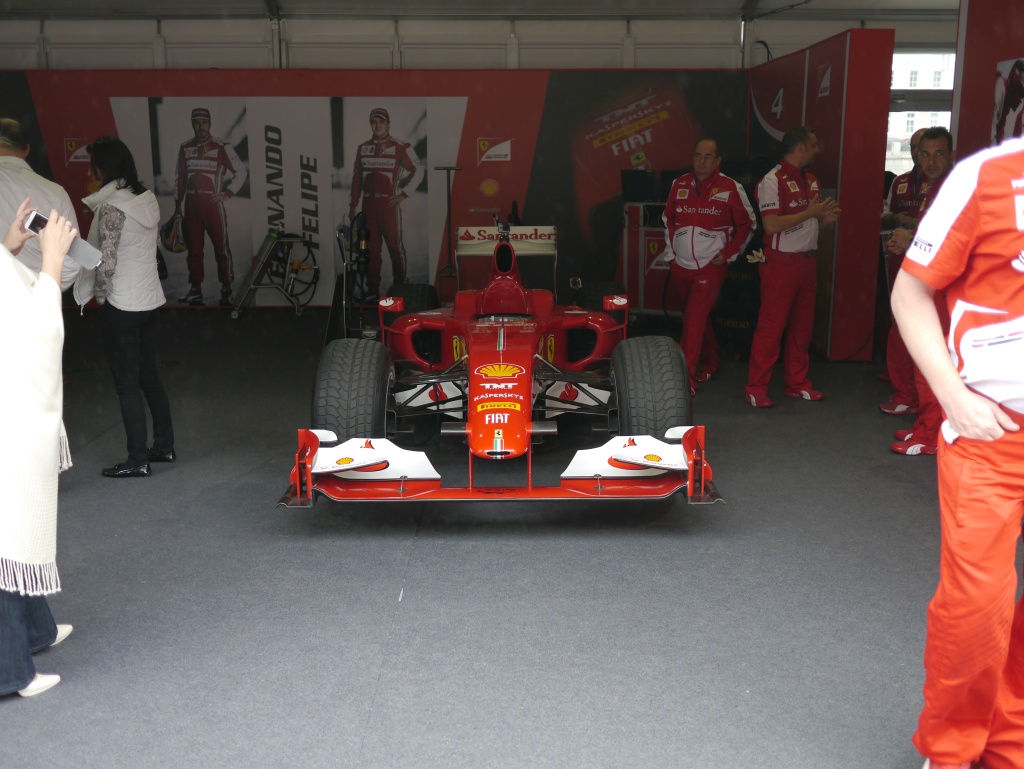 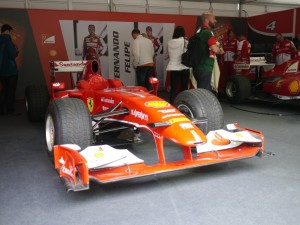 Despite the race simplicity, the Ferrari team brought many computers to the show and had a “flight control center” in the paddock.  It’s just a small amount of equipment in comparison to the multitude brought to grand F1 races, so it’s no wonder that we protect literally thousands of Ferrari computers. 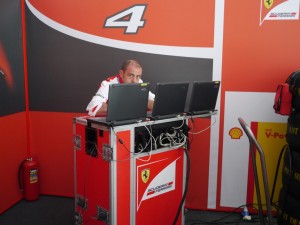 This computer is not that easy to recognize because of its unusual shape. It’s an F1 steering wheel! It helps racers control all aspects of the car’s behavior and is equipped with special preset buttons to quickly react to specific events on the track. 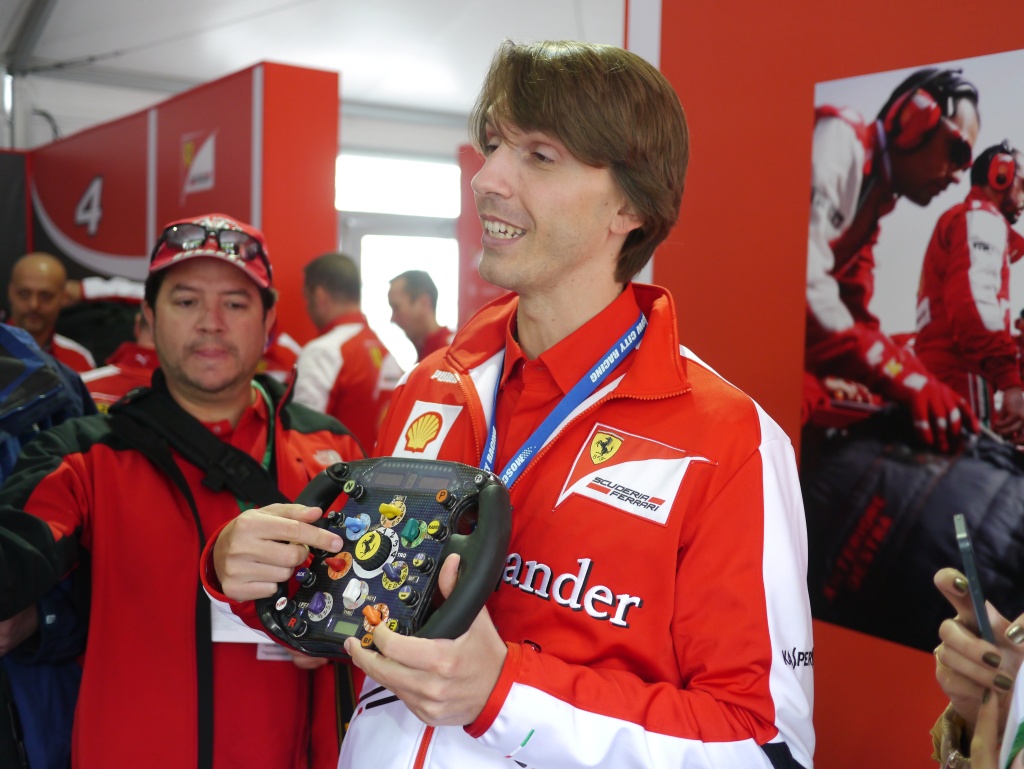 The car speed during the exhibition show was much slower than it is during a real F1 race. Nevertheless, soft tires and the Moscow asphalt made for an interesting combination: 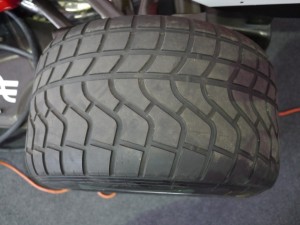 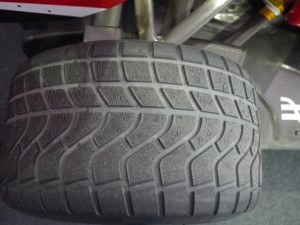 If you take a look at the racer’s seat, you can easily see why tall and broad-shouldered guys are so rare among F1 pilots. 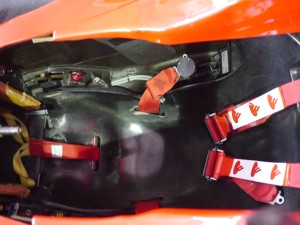 Of course, their stature is not important. What is important are the wonders they create on the racetrack! 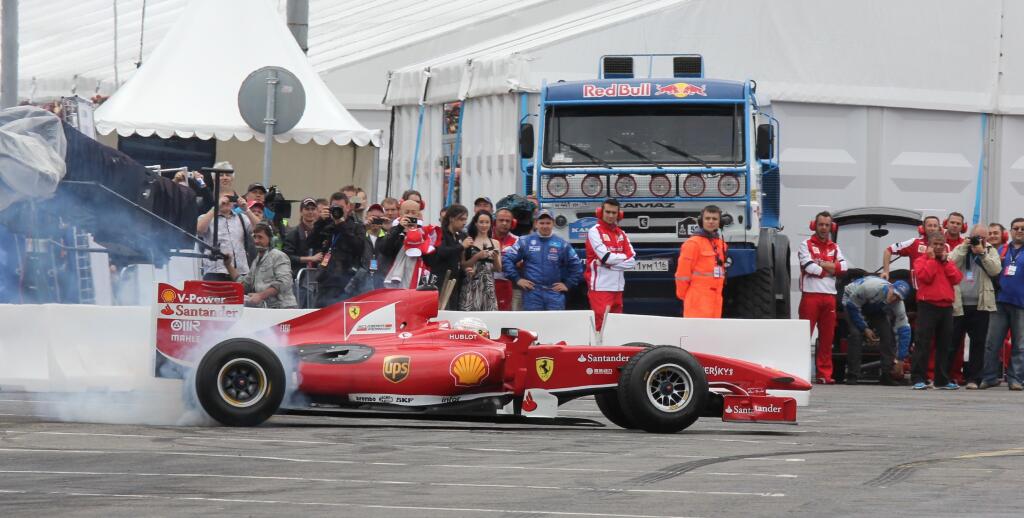