It used to be that high school kids spread the news about a party at the house of someone whose parents were out of town  by word of mouth. Cell phones surely made it easier for kids to tell each other without worrying about a parent answering the phone, but nothing has made it easier to get the word out than Facebook, through which teenagers can create an event and send the notice to friends. 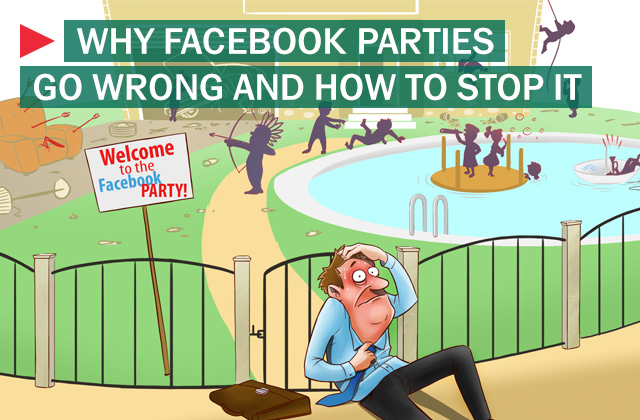 And just as these illicit gatherings have always invited party crashers who don’t know the student whose home it is and who don’t care about the home itself and who, instead, just want to have a good time, the same is true today. Except that just as Facebook makes it easier to spread the word, it can invite more party crashers than ever before, causing a party to quickly turn into a melee — especially if the teen who creates the event doesn’t restrict its notice to just his or her friends. This may be an oversight or, as recent studies by the Yale School of Medicine and Temple University have shown, it could be because teens are prone to risky behavior and have a low level of concern about the consequences of such behavior. It doesn’t just happen in movies- the most recent incident we are aware of happened in the UK in June, but every month there’s a similar story from somewhere in the world.

Just as Facebook makes it easier to spread the word, it can invite more party crashers than ever before, causing a party to quickly turn into a melee.

The most troubling news for parents is that it may be the kids who they least expect that do the riskiest things — the quiet ones, the introverts, because those are the ones looking for social acceptance. As a result, they’re likely to take greater risks to get that social acceptance — including inviting the whole world to a party at their house while their parents are away.

Such realities are part of the growing pains of children and parents alike, but there are some steps that parents can take to mitigate these dangers.

IT Security Incidents in the Education Sector

Contemporary educational institutions in the US are now as computerized as any corporation or government agency and, in the case of technologically oriented universities, sometimes to an even greater extent.