Kaspersky Lab has just released its forecast of digital realities in 2045, which is exactly 30 years away. As always with such forecasts, they are based on current trends and collective expectations, and are not just the product of pure fantasy – no matter how fantastic they may seem. Big changes are anticipated for the entire IT world and businesses. Security issues will change, too.

Our predictions for 2045 are very reminiscent of science fiction of the 20th century: robots everywhere, blurred lines between humans and robots due to widespread use of robotic implants, smart homes, 3D printing, etc. In fact, all of this looks like reality already. Implants are rare, but nothing new – so are robots and smart homes. There’s no such thing as “Hyper Intelligence” yet, and it’s not clear if it is going to happen at all or what the consequences – utopian or dystopian – might be, but the Internet seems to create a basis for it even if the Web itself is goes away. By the way, Google’s Eric Schmidt just predicted the vanishing of the internet as we know it.

The technologies from 30 years ago, when the first PCs started making their way into homes and offices, formed the basis for the 2045 predictions. Some innovations took awhile, while others ran ahead of all expectations, bringing a lot of troubles with them – remember destructive malware in the 1990s or insane worm pandemics in the early 2000s? Those pandemics became possible because of hasty software innovations. Getting ahead of competitors with new functions and possibilities was paramount, and these functions were being added in a hurry. At the same time, rising security issues were often neglected or ignored. Eventually, lessons were learned the hard way. Today’s software products are more secure than they were 10 years ago, but there’s a lot of room for improvement.

In 1984, it was hard to predict that 30 years later a third of the world’s population would carry a powerful computer in their pockets, and that it would be possible to control cars, home appliances, and critical industrial infrastructure remotely via a global computer network. Or that people would not only share words, pictures, and video in their day-to-day digital communications, but also their health stats, location history, and even DNA. From this point of view, our 2045 predictions are not that fantastic after all.

#Cybersecurity has to keep up with other innovations, and hopefully will.

Will new devices, networks, and interactions between humans and computers bring new security challenges? Obviously. Will we be able to protect ourselves and evade new pandemics? To achieve this goal, the IT security industry has to keep those key technology trends in mind and think of what additional threats they could bring. At Kaspersky, we think about today’s security struggles for our clients and how they might look a year from now, and some already work on technologies that will become necessary in 5-10 years. Some have to think 30 years in the future as well. 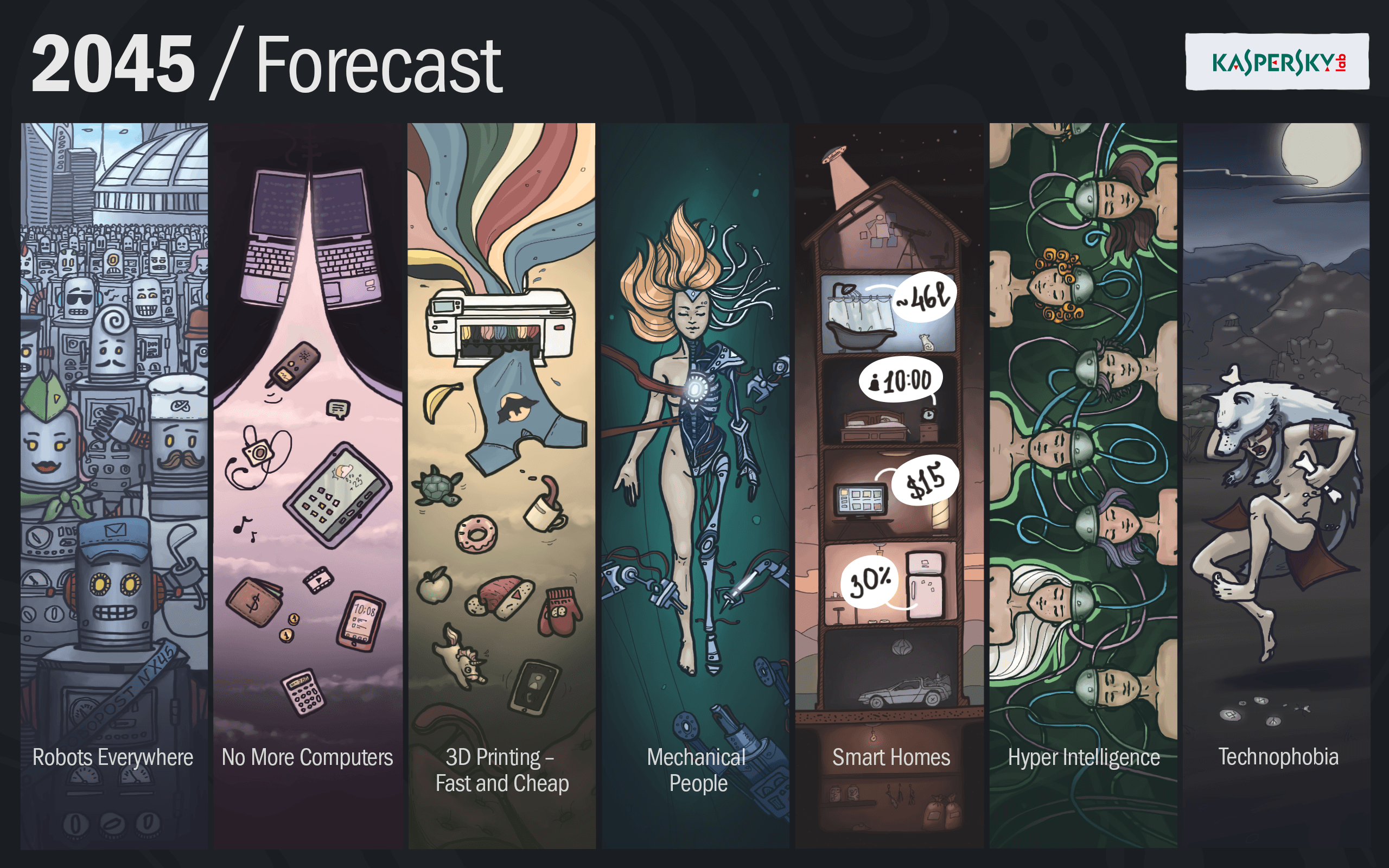 Why Gartner Magic Quadrant is important: the podcast