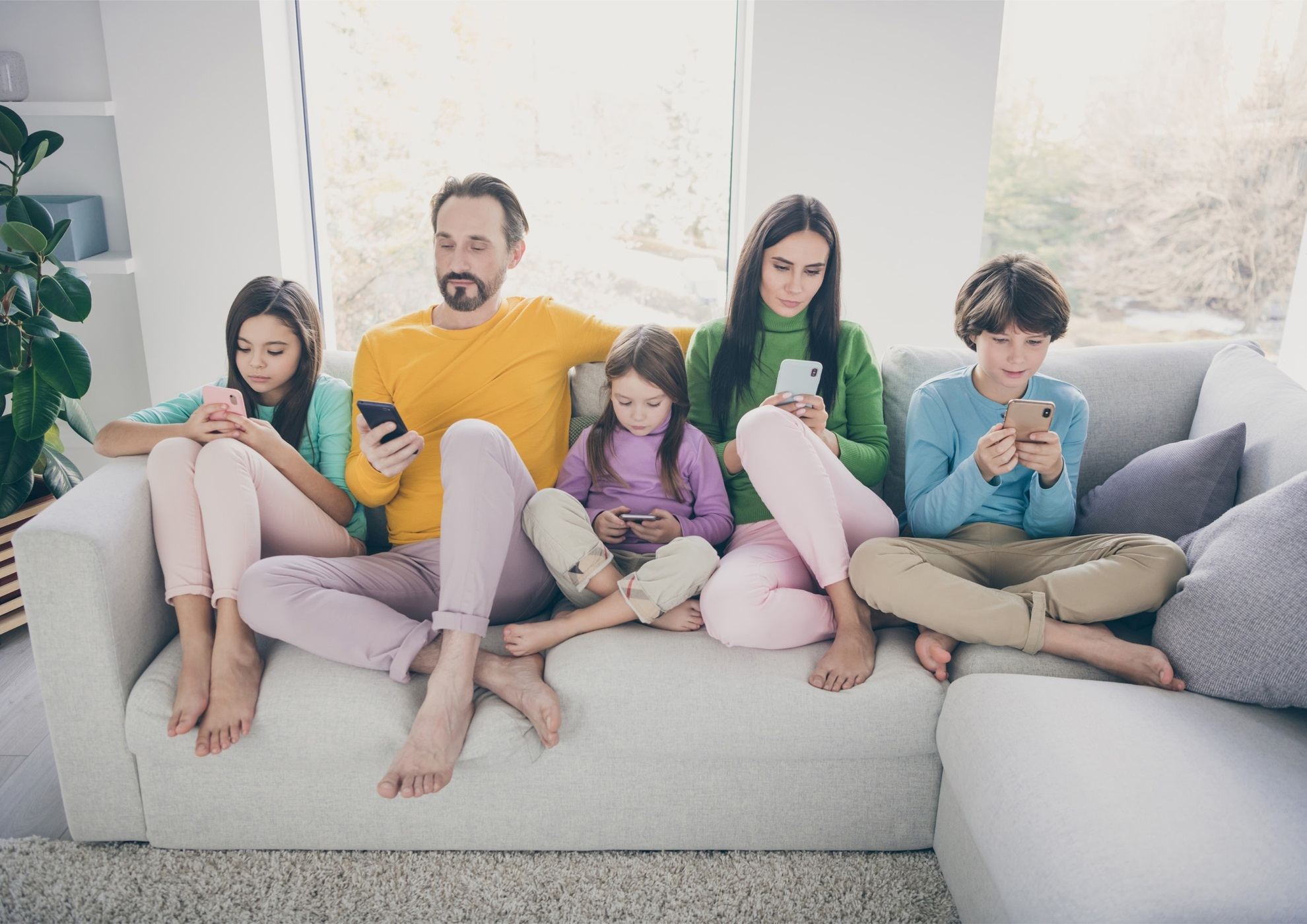 Youth and parenting in a digital world

Today, 61% of children get their first digital devices between the ages of 8 and 12. In fact, 11% get their first gadget before they’re even 5 years old. They’re using these devices to complete school assignments (46%), watch videos (54%) and play games (60%). And 48% of them are spending an average of 3-5 hours a day on some kind of device.

This is childhood in a digital age

It’s a whole new world for both parents and children to navigate.

Parents worry about their children becoming addicted to games (60%), how digital devices will affect them mentally, physically and socially (60%) as well as how they might impact their privacy and security (60%).

But parents are also responsible for the example they set with their own digital habits.

The result: 61% of parents don’t think they’re always a good role model for their children when it comes to digital habits.

This is parenting in a digital age

In this report, we’ll show you how parents are managing both their own digital habits as well as their children’s in an increasingly digital world.

And why it’s so crucial for parents and children to shape these new habits together. 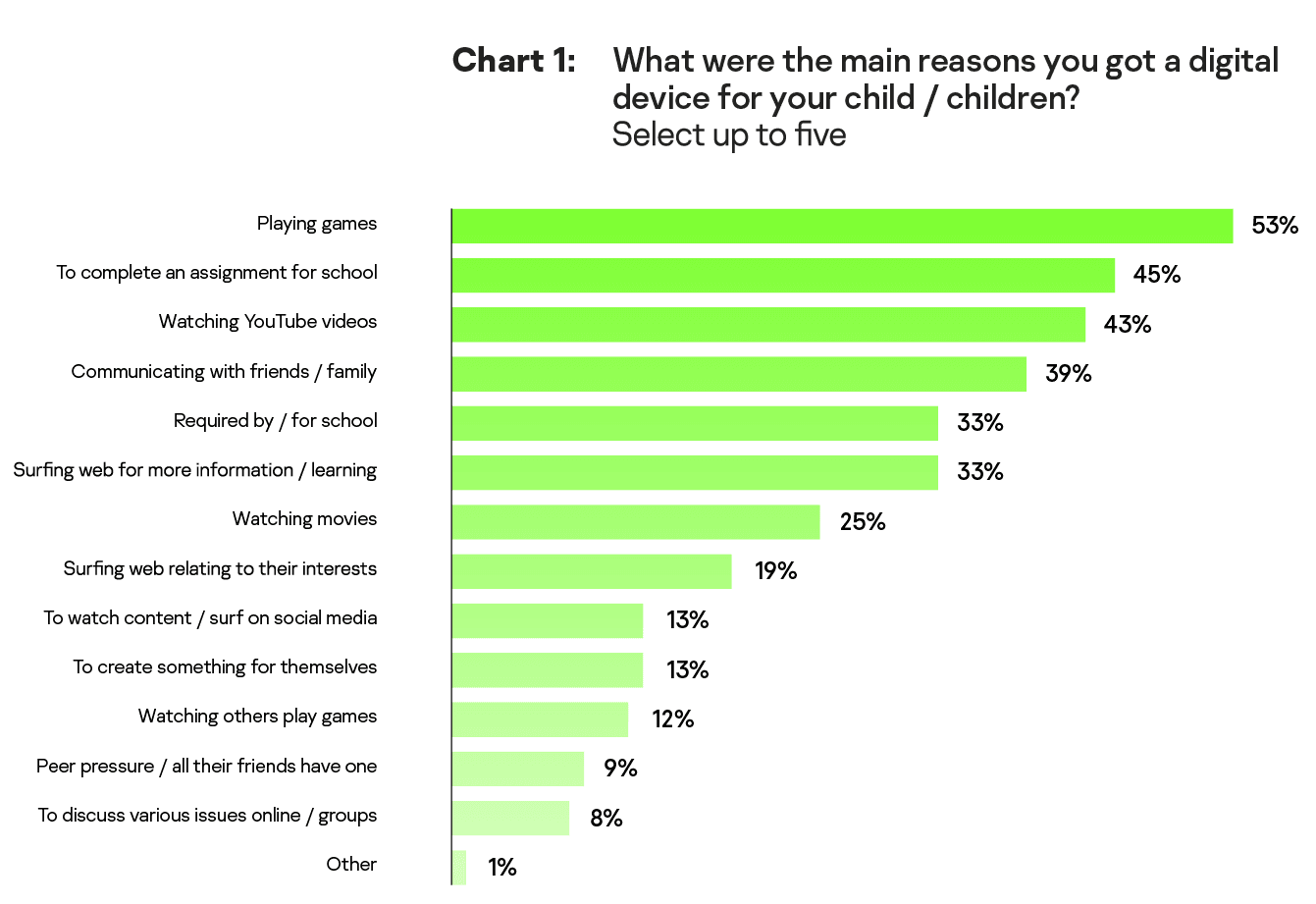 Parents around the world are making a concerted, deliberate effort to help their children use digital devices in a responsible, moderated way.

But parents can’t do it all on their own. More than a quarter of all parents believe this responsibility also falls on schools (28%) and children themselves (27%). 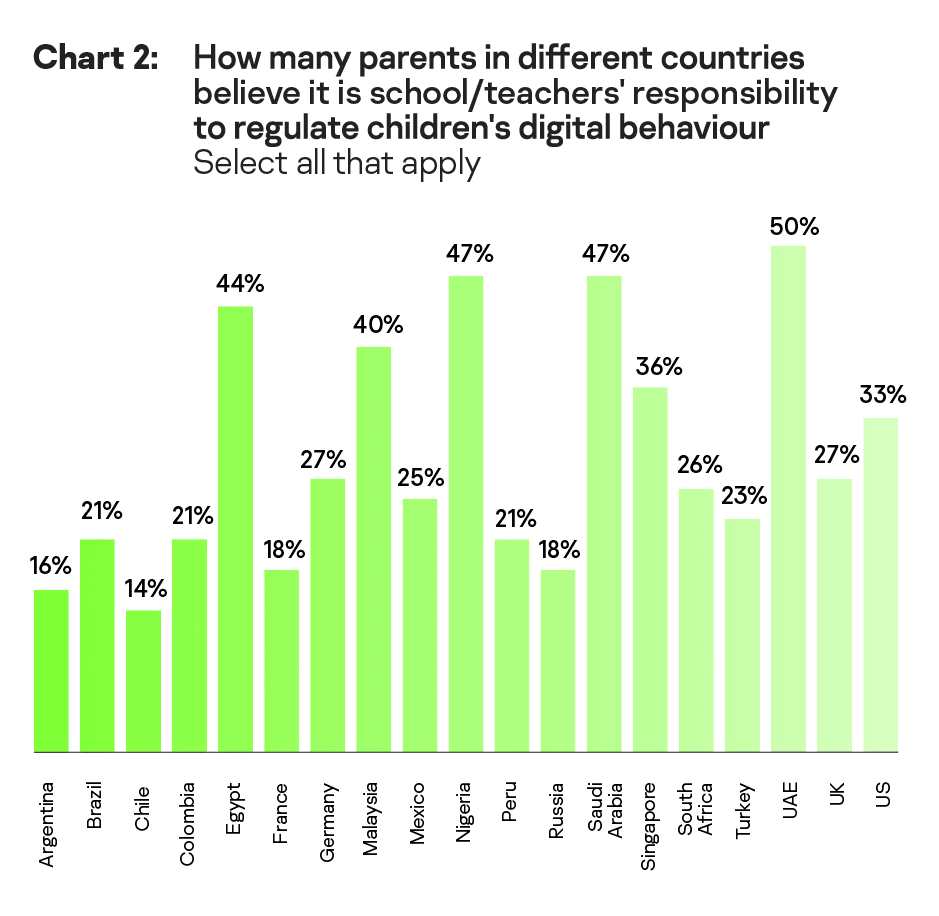 Nonetheless 90% of parents have sat down with their children and explained digital etiquette to them. And 96% of parents set limits on their child’s digital habits.

60% of parents put limits on the videos their children are allowed to watch with 56% restricting sites they can visit and 52% limiting the games they can play.

23% of these parents leave it up to the child to obey these limits once they’ve been set.

Fortunately, most parents report having the necessary skills to manage and monitor their children’s digital behavior.

Most important, 95% of parents try to encourage positive behaviors in their household by not allowing devices to be taken to bed (55%), setting rules that apply not just to the kids but the whole family (54%) and making dedicated, screen-free, device-free family time (51%).

But how well is it working?

Only 1% of parents believe the devices they’ve bought for their children definitely aren’t being used as intended. 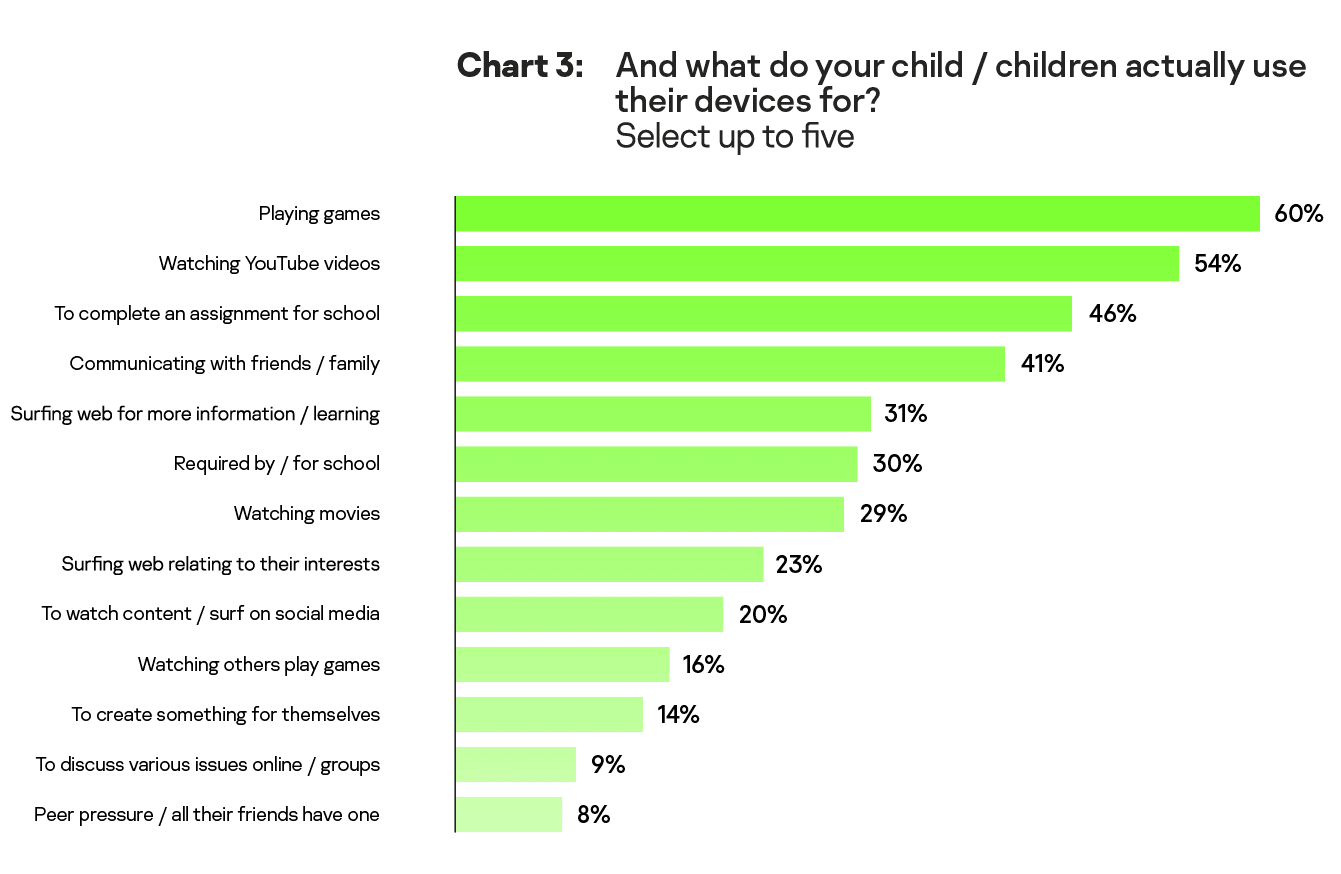 48% believe devices are mostly being used as expected and 43% believe this is the case to an extent.

Naturally, the more children there are in a household, the harder it becomes for parents to constantly monitor devices and how they’re being used.

But on balance, parents who extensively and regularly sit down with their children are more likely to find their kids are using devices as intended than those that don’t. 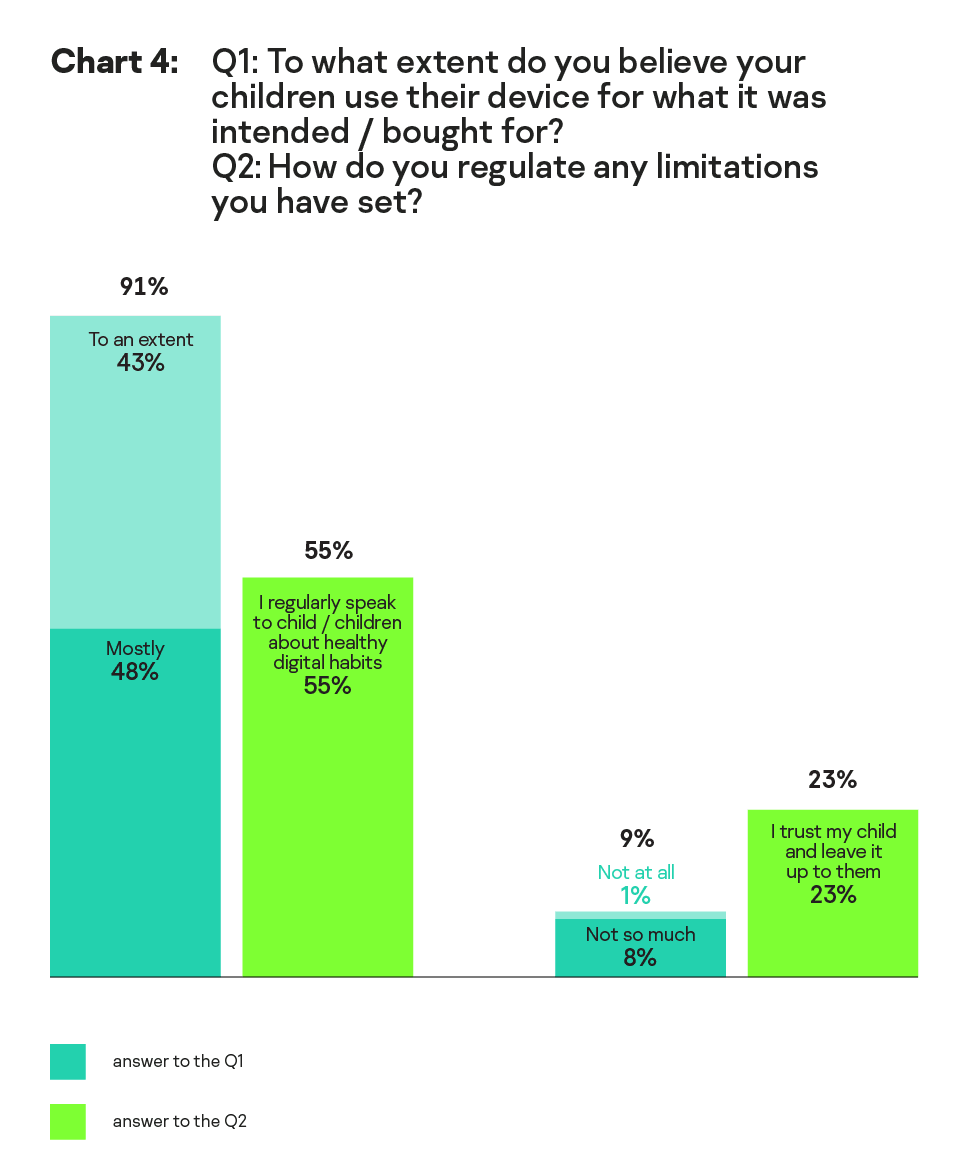 Even though 53% of parents wish their children would spend less than 2 hours a day on devices, only 29% of parents report that’s actually the case.

Still, 58% of parents feel their children spend just enough time on devices with only 33% feeling their kids spend too much time.

Exactly 48% of parents report both that their children spend between 3 and 5 hours a day on gadgets and that they themselves spend the same amount of time on devices too.

Clearly there’s a connection between parents’ digital habits and those of their kids.

So, let’s look at that a little more closely. 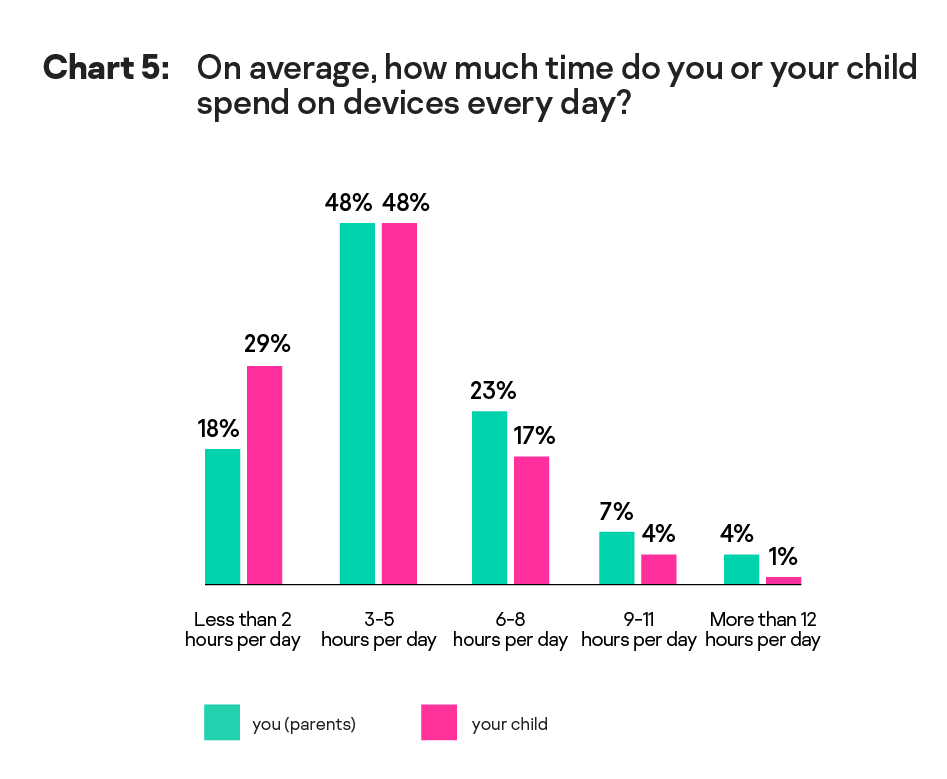 France and Germany lead the way

Far surpassing the global average of 29%, 62% of French parents and 49% of German parents report their children spend less than 2 hours a day on devices.

How parents manage their own digital habits

Between work, monitoring their children and seeking leisure time for themselves, parents have a lot of reasons to use digital devices. 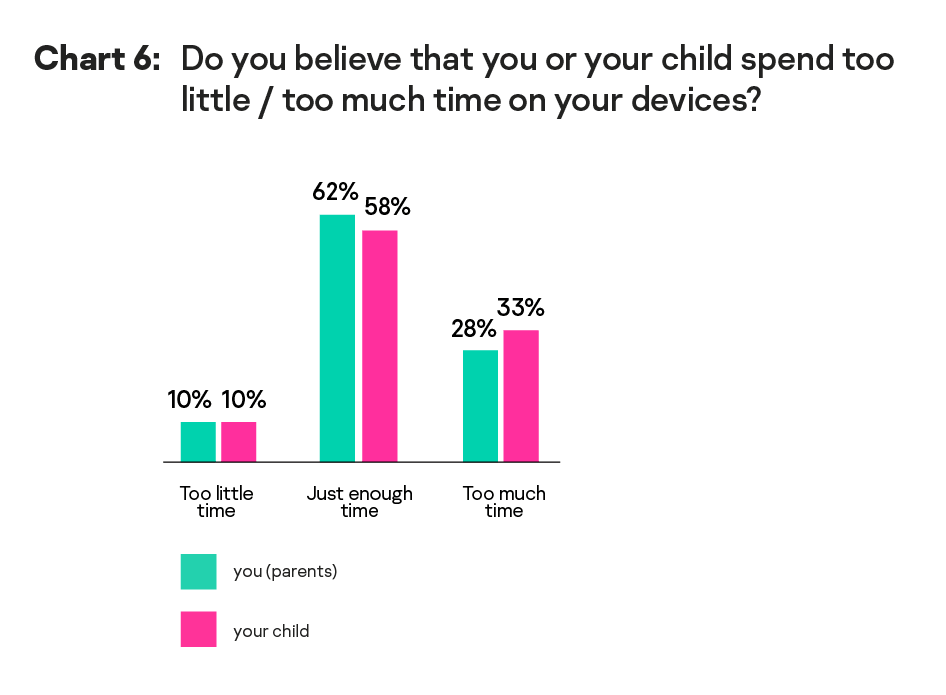 28% of them characterize that as too much time on their devices while 62% feel they’re spending just enough time.

The role of role model

61% of parents report they aren’t always a good role model to their child with 5% reporting their children must do as they say, not as they do.

For instance, 65% of parents report that they use their digital devices during meals even though only 11% state they would allow their child to do the same.

And 72% report that they text during conversations even though only 10% would accept the same from their kids.

Similarly, 47% of parents sometimes talk on the phone or even text when they’re driving. And 90% of parents check their devices for messages during personal time.

At the same time, parents are also making a deliberate effort to proactively set the right example, enforcing new digital habits that benefit both their children and themselves.

65% of parents skip calls and switch their devices off so they can’t be reached with 15% doing so regularly.

And 86% of parents stop their vehicles in a safe area before using their devices with 48% doing so regularly.

As we’re about to see, these new digital habits are certainly good for parents. But they also have an immense effect on children.

For instance, 80% of the time, when parents spend less than 2 hours a day on devices, their children do too.

This demonstrates that for parents and children to adopt healthy digital habits, they have to do it together. 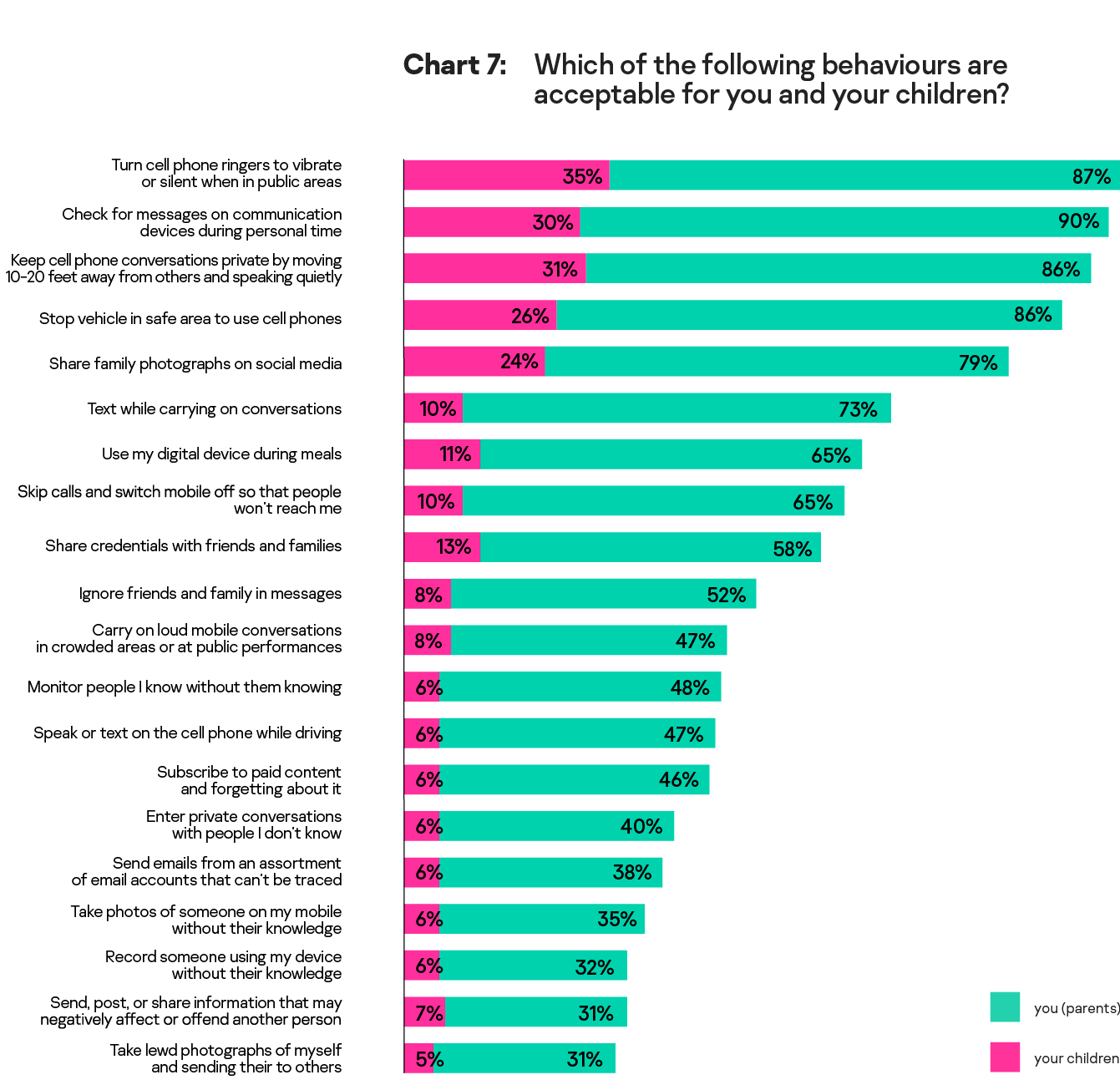 The data also reveals some other important correlations between specific parent behaviors and their impact on their children’s screentime.

For instance, children whose parents regularly use their digital device during meals spend an extra 39 minutes per day on their own device.

In fact, the combination of these behaviors correlates with an additional 1 hour of screentime.

What this suggests is that it isn’t any one specific behavior that causes children to spend more time on devices. Rather, the whole range of different behaviors and habits exhibited by parents influence a child’s propensity for screentime.

In fact, the most important factor may well be how sensitive parents are to their own performance as both role models and regulators.

For instance, the data reveals that parents who regularly use their devices during meals are more likely to think they are better role models and less likely to place limitations on their child’s usage.

Unsurprisingly, their children are less likely to use devices for less than 2 hours a day.

In other words, the data suggests that parents who want to reduce their child’s screentime should consider their own behavior as well as the things they’re doing to monitor and control their children’s digital behavior. 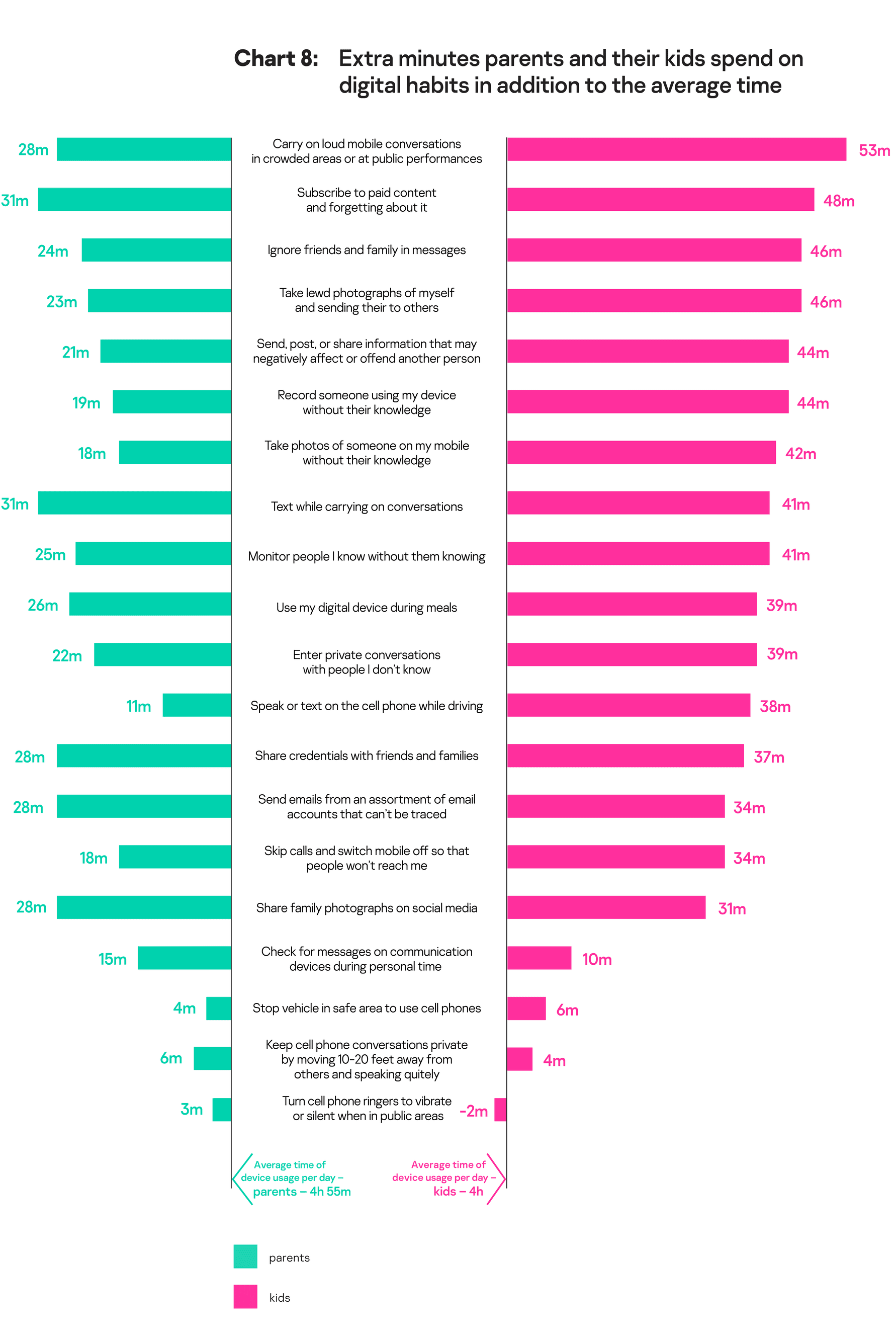 Embracing the digital age together

Today’s parents are raising children in a far different world than their parents did. Now 70% of children spend at least 3 hours on devices every day. And so, do 82% of parents.

But it’s also important to note just how much parents around the world have in common.

No matter where people are raising kids, they’re embracing new digital behaviors in a meaningful way. And in every case, the digital habits of parents and children are interlinked.

In more ways than one, what matters most to the healthy and secure development of children in this new digital age we’re in, is the same thing that has always mattered – the concern and attention of their parents.

Kaspersky is a global cybersecurity and digital privacy company founded in 1997. Kaspersky’s deep threat intelligence and security expertise is constantly transforming into innovative security solutions and services to protect businesses, critical infrastructure, governments and consumers around the globe.

Over 400 million users are protected by Kaspersky technologies and we help 240,000 corporate clients protect what matters most to them. Learn more at www.kaspersky.com.