This study was conducted online by research firm Toluna, October – November, 2016. Users from 18 countries were surveyed online. A total of 16,750 people, aged over 16 years old, split equally between men and women, were surveyed. Data was weighted to be globally representative and consistent. 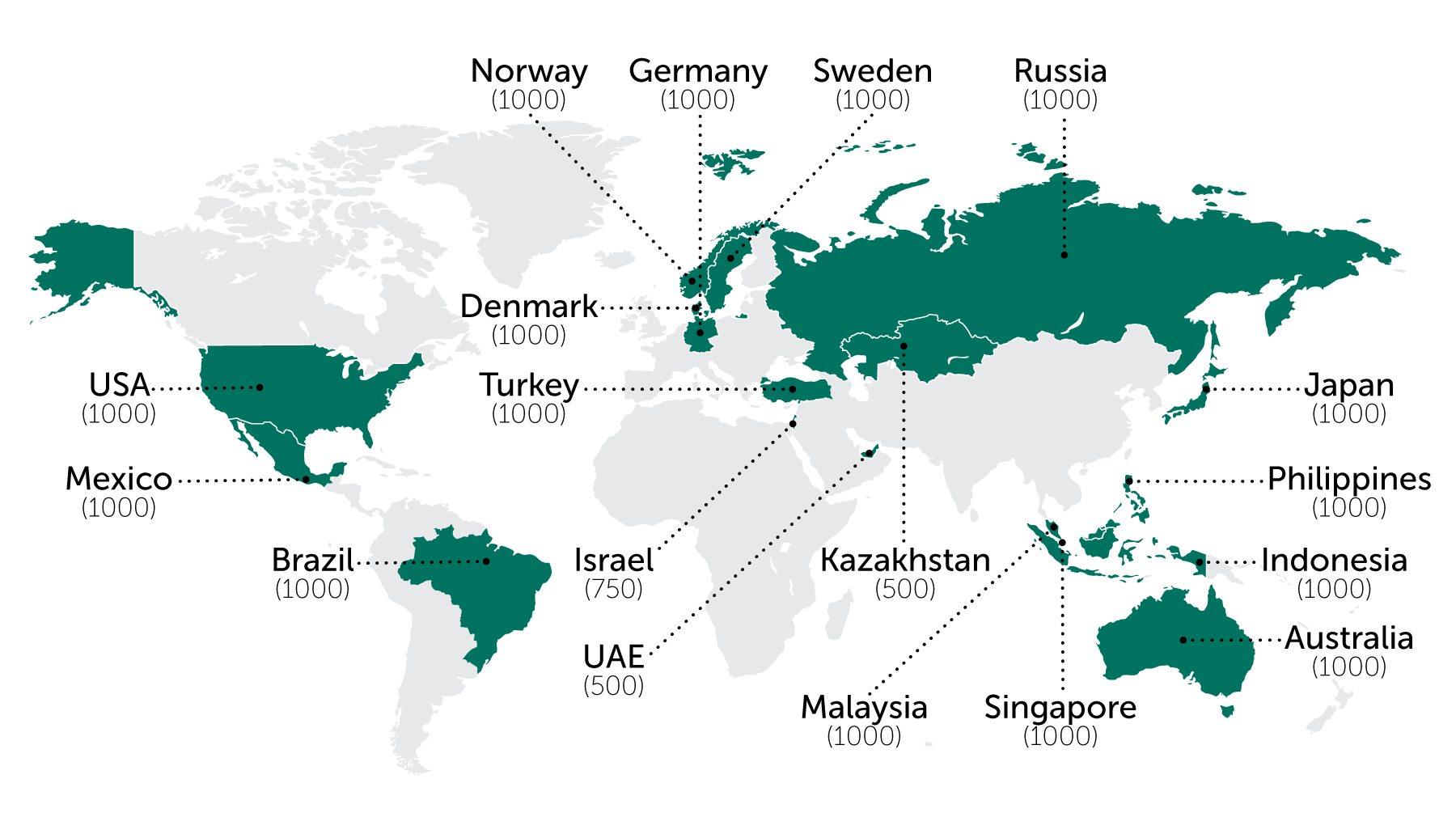 Not all the survey results have been included in this report. To request further data please contact Kaspersky Lab at prhq@kaspersky.com.

Social media has the potential to bring us, as an online community, closer together than ever before. It allows us to share moments, memories and photos with each other, communicate across borders, build and maintain friendships and develop communities. Given the opportunities and the appeal, perhaps it’s no surprise that by the third quarter of 2016 Facebook had 1.6 billion monthly active users, and Twitter averaged 317 million users.

However, despite social media’s clear ability to bring us together, can it also sometimes leave us feeling down? And what are the implications for our security online?

With this question in mind, Kaspersky Lab undertook a study to delve into people’s relationship with social media. We wanted to gain a better understanding of what people expect from being active on social media, and the reality.

The findings were fascinating. Across the globe we have found evidence of social media contributing to people feeling let down, insignificant, or negative. Worse still, in some instances, we found that in their quest for social validation, people are sharing an increasing amount of sensitive information on social media platforms, with men willing to take greater risks than women.

At Kaspersky Lab, our mission is to help people protect what matters most to them. We will, therefore, use the findings of this study to help people have a healthier relationship with social media – one in which they do not feel the need to put themselves at risk.

Section 1: Not living up to expectations

The findings of the research suggest that although many people initially join and spend time on social media to make themselves feel good, and to be entertained, they are sometimes disappointed. The study shows us that annoying advertising, a lack of likes and even jealousy leave them feeling negative after spending time on social media.

The survey shows us that people use social media for positive reasons – 65% use social networks to stay in touch with existing friends, colleagues or acquaintances, and 60% go on social media to see entertaining/ funny posts. 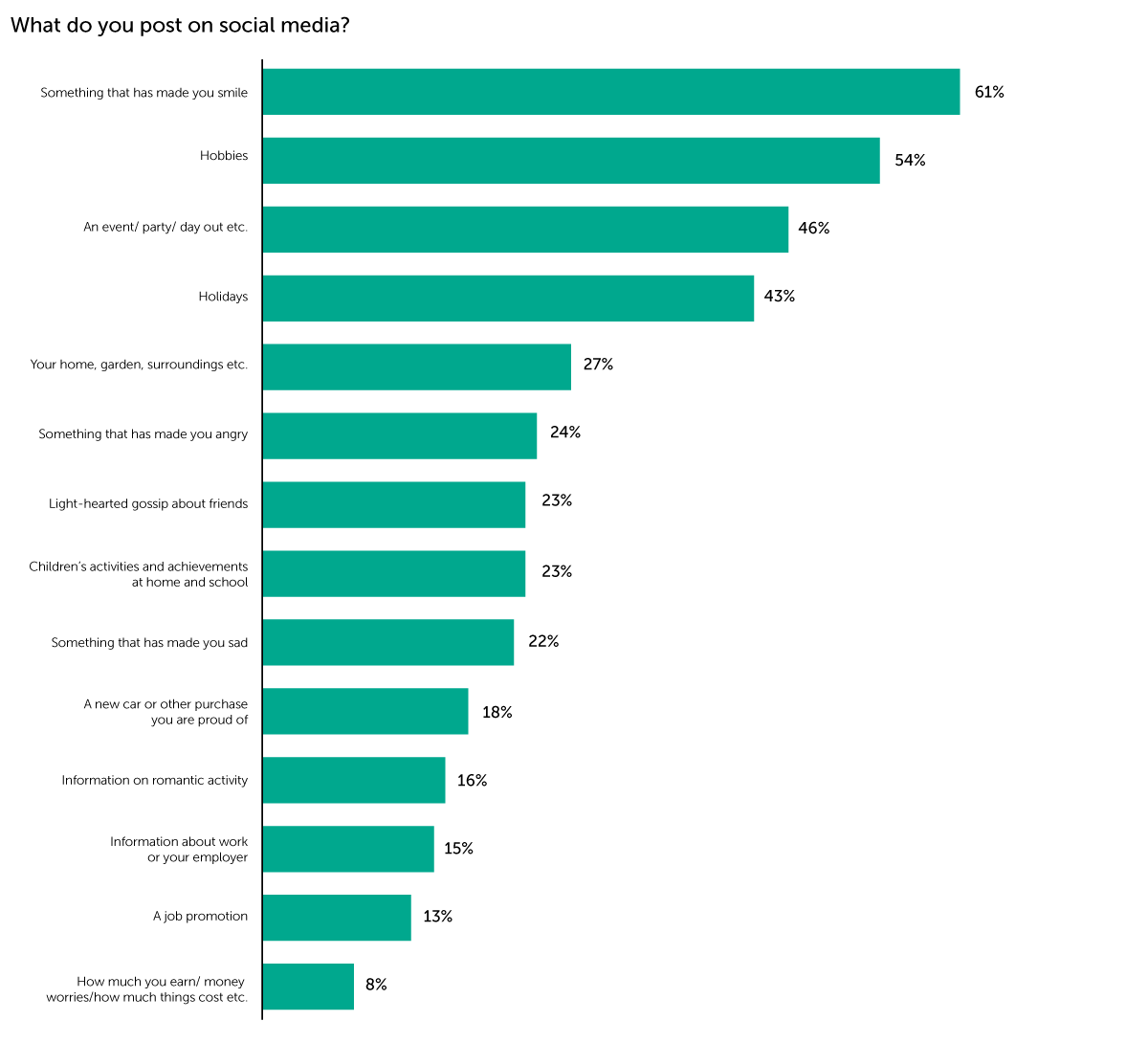 The desire to use social media for entertainment and for its positive effects is evident in the results of the survey, with this being the most popular option selected by respondents. Around half of people choose to post optimistic things online – including things that make them smile (61%).

Although people go on social media to post something positive about themselves, the proliferation of cheerful posts about hobbies, holidays, and events etc. that they encounter in the process can leave social media users feeling less positive than they may expect. For example, 37% of respondents admitted that looking at past happy posts of their own can leave them with the feeling that their own past was better than their present life. Social media can also leave users with the impression that their friends are enjoying life more than them. 59% have felt unhappy when they have seen friends at a party that they didn’t attend. Even a friend’s happy holiday pictures have had an unhappy influence on 45% of Internet users and around three-quarters of people said that annoying advertising on social media has a negative influence on their mood (72%). 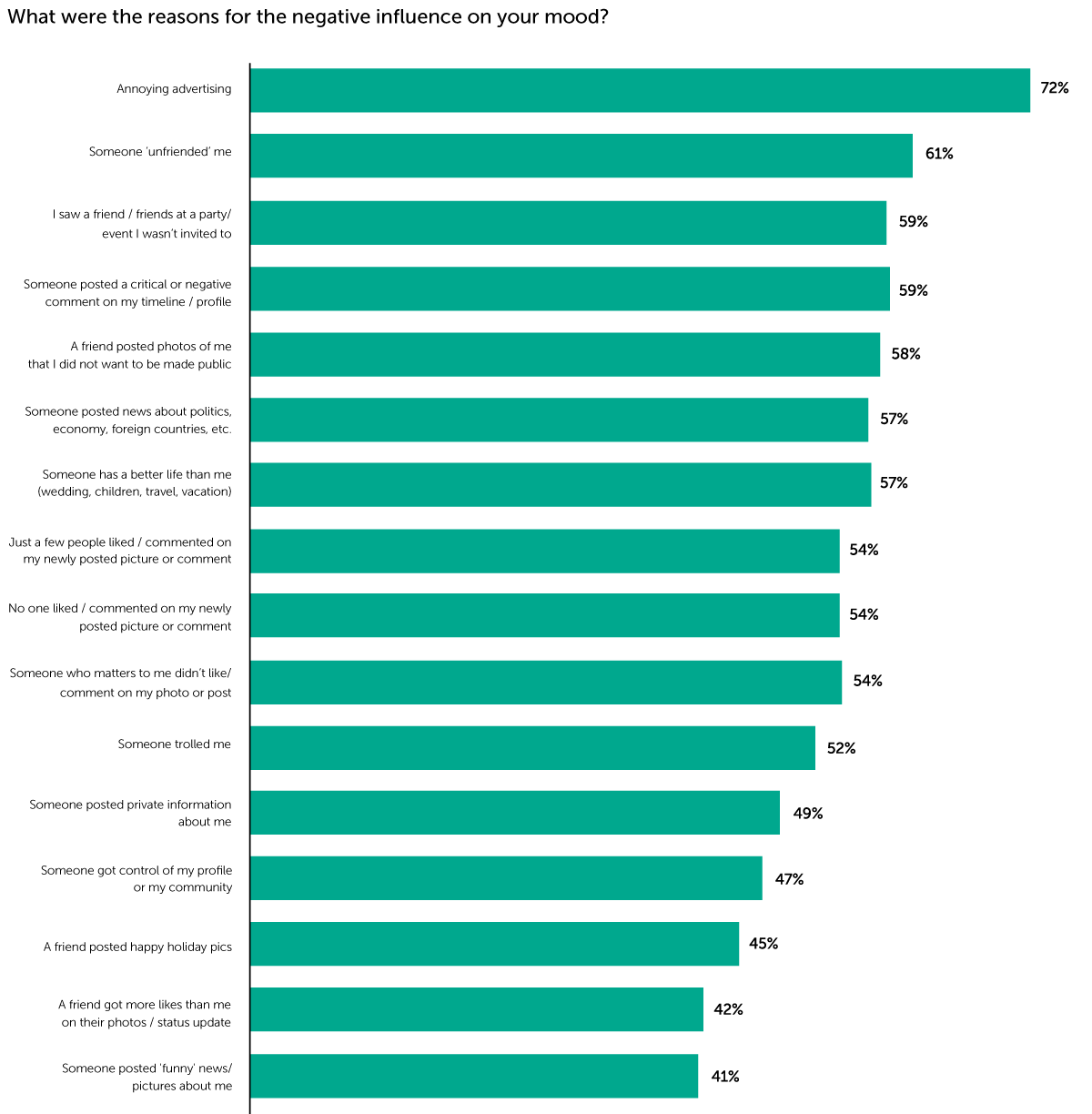 Section 2: The quest for social validation

The study demonstrates that through the forum of social media, people are searching for social validation, to make them feel good. And in this quest, they are placing importance on something as simple as how many likes they receive for their social media posts.

With only a third (31%) of people saying that they are not bothered about the number of likes they receive for their posts, videos or photos, the majority of respondents to the survey admit that they want their posts to be liked. Furthermore, because this is important to them, after they have posted or commented on something on social media, most people (55%) check their post for any reaction or response several times a day or more.

The data also shows that men are prone to checking their social media a little more often than women. And people – men especially – become upset if they do not get the likes they hope for. A quarter of men (24%) said they worry that if they get few likes their friends will think that they are unpopular, compared to one-in-six (17%) women. One-in-four people (28%) admit they get upset if somebody who matters to them doesn’t like their posts, rising to 29% of men. 24% also said they feel jealous if their friends like somebody else’s posts.

From these results, it is clear that people are eager to be publicly liked on social media. Their quest for social validation can even lead people to post embarrassing, or inappropriate things, in order to get more likes. 27% admitted that they would reveal something funny about a friend and 26% would do the same about a co-worker if it would secure them a significant number of likes on social media. Around one-in-ten would reveal something embarrassing or confidential about their co-workers, friends or employers. Men are twice more likely to do this than women, with 12% of men saying they would reveal something confidential about a friend, compared to 5% of women. 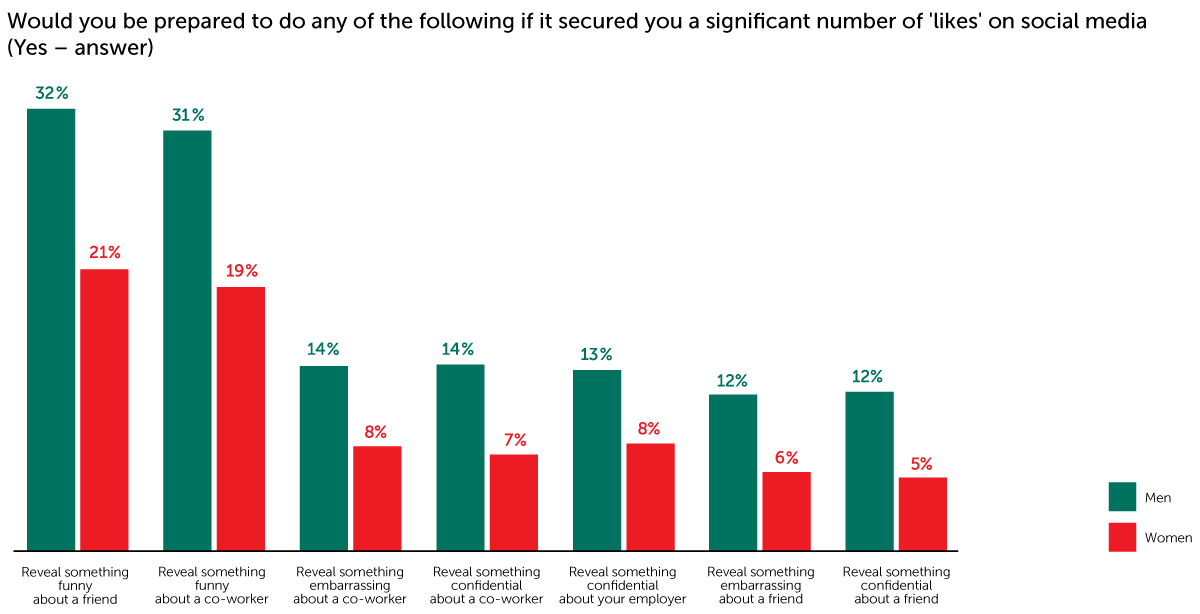 But the hunt for more likes doesn’t stop there. The survey shows us that one-in-five people (21%) are ready to express strong views about something – even if they wouldn’t normally express views like that – if it meant they would gain a significant number of likes. Around one-in-ten (12%) said they would pretend to be somewhere or doing something that might not be strictly true, post photos of friends under the influence of alcohol (12%) or photos of friends or themselves wearing something revealing (10%) in order to get more likes. Some people (7%) are even prepared to post photos of themselves naked. Men are more prepared to take these greater risks than women, suggesting that a high number of likes is more important to them and that they are willing to go further for social validation than women. 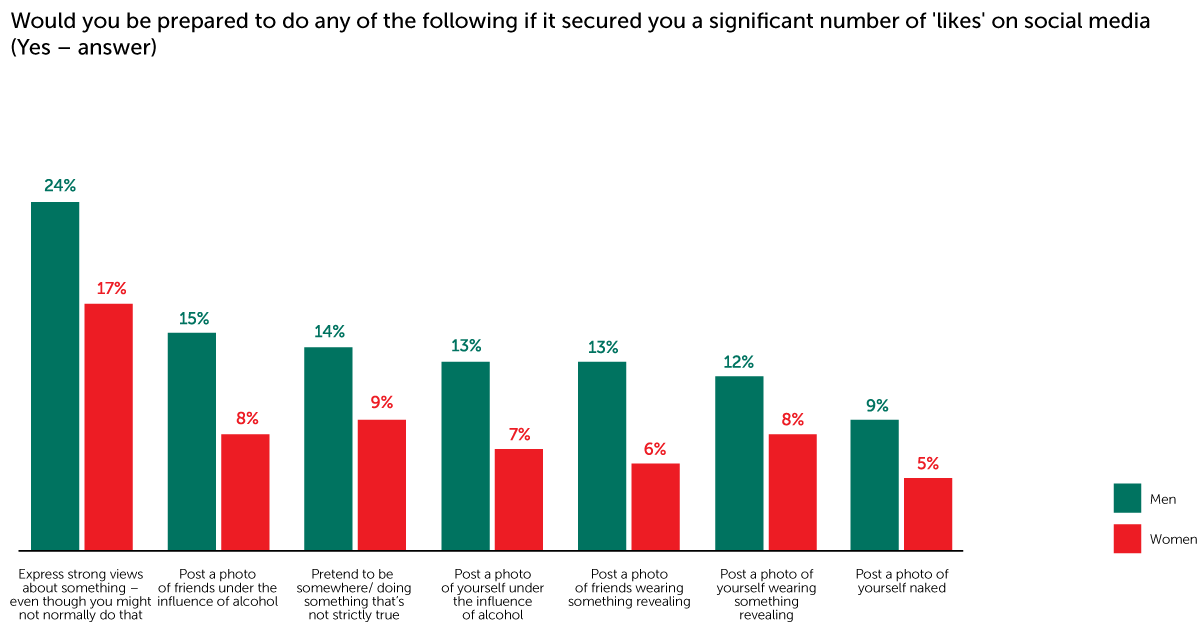 In striving to receive more likes on social media, people can put themselves and their loved ones at risk by disclosing private information they don’t want other people to know.
According to the research, a third of people (33%) would be worried if somebody discovered where they live and what their house looks like, when they are away from home (36%), or how old their children are and how to find them (33%). People would also be worried if others knew their dating history (22%), salary (30%), or their intimate secrets (51%).

Nevertheless, the research shows a large number of people sharing information about themselves and their connections on social media, making it easier for others to discover exactly what people want to keep protected. 37% share their home town on social media, 31% share their email address, 30% share their relationship status, 18% share details of their place of work and 14% share their address, all of which results in sensitive information being available to others online, who can exploit it if they wish. 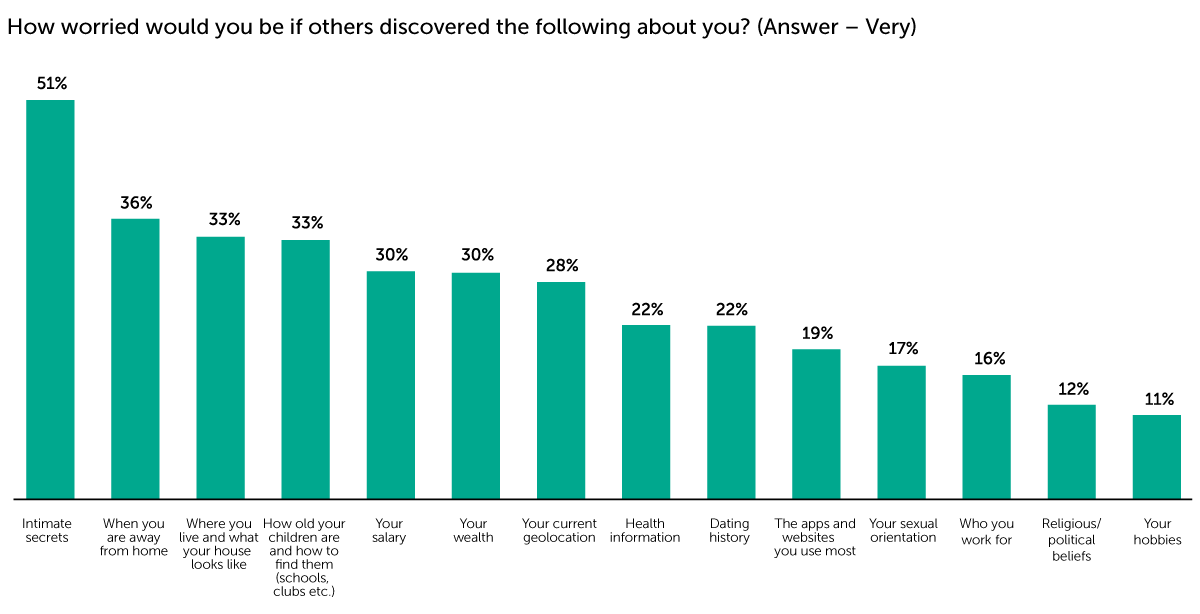 The research shows us that online communication is impacting the relationships we have with others in the physical world.

However, the research shows that social media can also have a negative impact on relationships. With people’s tendency to post photos of themselves or others under influence of alcohol, wearing something revealing or even naked in order to get more likes, it is possible to put social media at the heart of some modern-day relationship damage. This is the case for 21% of parents, whose children have seen them in compromising circumstances as a result of social media. Around one-in-five (16%) respondents also admitted their relationship with their spouse or partner has also been damaged as a result of them being seen in a compromising situation on social media.

Furthermore, people cannot always evaluate their online communication objectively. Under certain circumstances they perceive their online communication as “hyperpersonal communication” and thus they can misread and over-interpret the messages on social media. “Being confronted with a reduced communication mode leaves room for interpretation under some circumstances, resulting in rather positive interpretations and positive feelings. We feel especially close, we blind out the rather negative, focus the possible positive intentions behind a text message and over-interpret. Although being reduced in terms of media richness, it is an emotionally charged medium. Because it is reduced it is sometimes bigger than real life.”

Whilst for the majority of people, face-to-face communication with friends and family has continued as usual, a significant third of people admit that as a result of social media, they communicate face to face less. A third of the respondents to the survey admitted that they now communicate less with their parents (31%), children (33%), partners/spouses (23%), friends (35%), and colleagues (34%) because they can see them and communicate with them via social media.

Social media is a forum that people go to for social validation, to feel good, to keep in touch with others, and to share good news. Yet, that doesn’t mean it is a place that always makes people feel positive. Seeing one long news feed of everyone else’s parties, events, holidays and good news, or not receiving many likes on a post, can sometimes leave people feeling disheartened about their own lives.

At Kaspersky Lab, we help people protect what matters most to them. This study has shown us that in order to generate more likes and feel better about the time they spend on social media, people are being tempted into sharing more information; potentially putting themselves and the people they care about at risk. In order to protect themselves, people need to be more cautious and cyber-savvy about the information they share on social media. That will not only help to mitigate the risks of the online world, it will also help to prevent relationship damage in the physical world as a consequence of online activities.

Report: Pervasive cyberstress is more than just another cyberthreat

Did our 2016 predictions come true? Let’s see and try to forecast what awaits the security industry in 2017.