Kaspersky Lab has published its report on the evolution of threats in the second quarter of 2013. This period has been marked with a number of security incidents of different types and severities, including the discovery of global cyber espionage campaigns like Winnti and NetTraveler, and massive leaks of personal data from companies such as Drupal, Opera and Ubisoft.

The main “celebrity” of the quarter was mobile malware in terms of quantity as well as complexity. Mobile malicious programs turned out to be the most remarkable kind of cyber threats during the period.

The key numbers and facts of the report are:

Number of malicious code samples in our collection 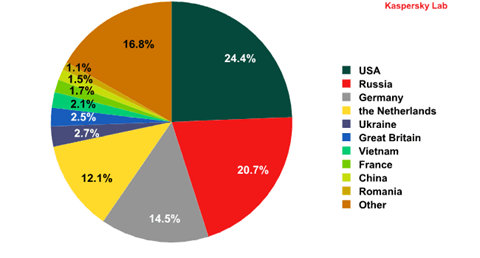 The distribution of online resources seeded with malicious programs in Q2 2013.

The full report entitled “IT Threat Evolution: Q2 2013” is available at Securelist.com.

10 Signs of a Malware Infection

Even if you follow all the Cardinal Rules of system security — you regularly update your operating system and programs, avoid spam like the plague and never click through on suspicious