More than 16% of all PC users who agreed to provide data to the distributed global Kaspersky Security Network were still working on computers running Windows XP as of June 2014. This is the fact from the new survey “Windows usage and vulnerabilities research” carried out by Kaspersky Lab experts in the summer of 2014.

The overall feelings on Windows XP are: It’s longevity is breathtakingly awesome – and awful at the same time, since it’s clearly the most malware-targeted OS, and after Microsoft dropped its support earlier this year, potentially the most defenseless one.

Why do people stick with it? Nostalgia (never underestimate the nostalgic feelings!), habits (yet another potent bonding substance), feeling like “Okay, it works, so let it be”, etc. Sometimes emotional bonds are much stronger than stern logic.

Besides there are financial reasons as well:

“Boss, Microsoft dropping the support for Windows XP, we really need to move on.”

“Does it mean that XP no longer works?”

“So what’s the problem?”

“Insecure? I remember having employees that should care about security. And if you don’t know who they are, check the mirror next time you’re at the restroom. Now get lost.”

That’s a bit of an exaggeration, but not by much. Businesses really prefer to keep to the familiar software, especially if there is some custom things written in-house for certain operating systems.

So the rate of renewal is far from desired.

Besides Microsoft released an embedded system of PoS terminals based on Windows XP as late as in 2009. Some cunning fellows even suggested to leverage this circumstance in order to keep receiving updates for Windows XP for a few years on (its extended support will end on April 9, 2019). Microsoft, of course, objected saying it wouldn’t do the trick.

Anyway, the actual figures from the new survey show that Windows XP epoch is near the end. It is still more used than Windows 8.1, it will definitely stay for a while yet, but the figures show that each year the popularity of Windows XP decreased roughly by 10 percentage – due to various reasons, and the most likely one is hardware upgrades. 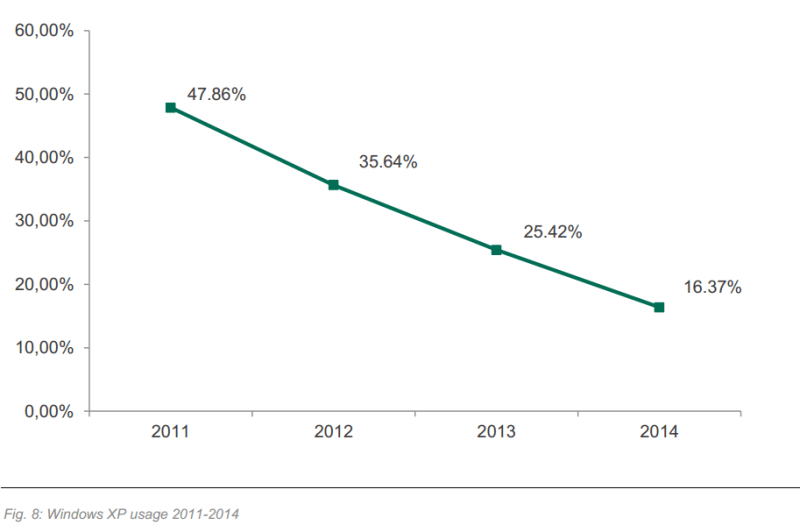 The last time users could buy a PC with pre-installed Windows XP was years ago (XP went off sales completely in 2010), so Windows XP’s still large share is shrinking with every new PC/laptop bought. And given the 10% yearly decrease rate, by the end of 2016 Windows XP’s share probably (and hopefully) will be vanishingly small.

Anyway, Kaspersky Lab will keep supporting Windows XP in its solutions – both end-users and business-oriented – until 2016.

For more details and figures kindly refer to full version of “Windows usage and vulnerabilities research”.

A recent survey shows that IT professionals have a very uneven understanding of how to protect their virtualization environments. Baseline awareness exists, but there’s a Roman Colosseum of room for improvement.