Although we recently reported finding 20 apps in Google Play posing as Minecraft modpacks — the most popular with more than a million downloads — Minecraft-themed malware continues to pop up in Google Play. Instead of doing anything they claimed, the apps turned users’ smartphones and tablets into extremely intrusive advertising tools.

To be clear, the apps were totally useless from a user perspective. Instead, after the first run they hid their icons and repeatedly opened the browser to flash ads. They could also play videos from YouTube, open Google Play app pages, and more. The version we analyzed, for example, opened the browser every two minutes, rendering the device essentially unusable. The thing was especially troubling, because it was extremely hard for a user to figure out what was going on, which app was responsible for the troubles and how to stop it.

We notified Google about our find, and the malicious apps were quickly removed from the store.

One example of the cycle comes from the VK Music Trojan, which stole VK user accounts and, despite being reported, dug in to Google Play for several years.

Mindful of that, we revisited the case of the harmful Minecraft modpacks in Google Play to find out whether reporting had helped. To that end, we launched a search for similar apps — and found some.

First, we found several apps using the abovementioned approach, but with some improvements. In a basic scenario the apps accept push message commands from the attackers to show full-screen ads (no user interaction required). The apps are designed to download an extra module as well. With that module downloaded, more functions become available, enabling the apps to hide their icons, run the browser, play YouTube videos, open Google Play app pages, and so forth.

This time, the list of compromised apps included, in addition to Minecraft mods, a file recovery utility called File Recovery – Recover Deleted Files. Version 1.1.0, available from Google Play until February 2021 had a malicious payload. That version has been removed, and version 1.1.1, which is now on Google Play, is safe.

Second, we found a couple of Minecraft modpacks with basic functionality, a configuration in which the apps occasionally show full screen ads, even with the app inactive, but are unable to hide their icons or run the browser, YouTube, or Google Play. For extra monetization, the in-app purchases function is used. 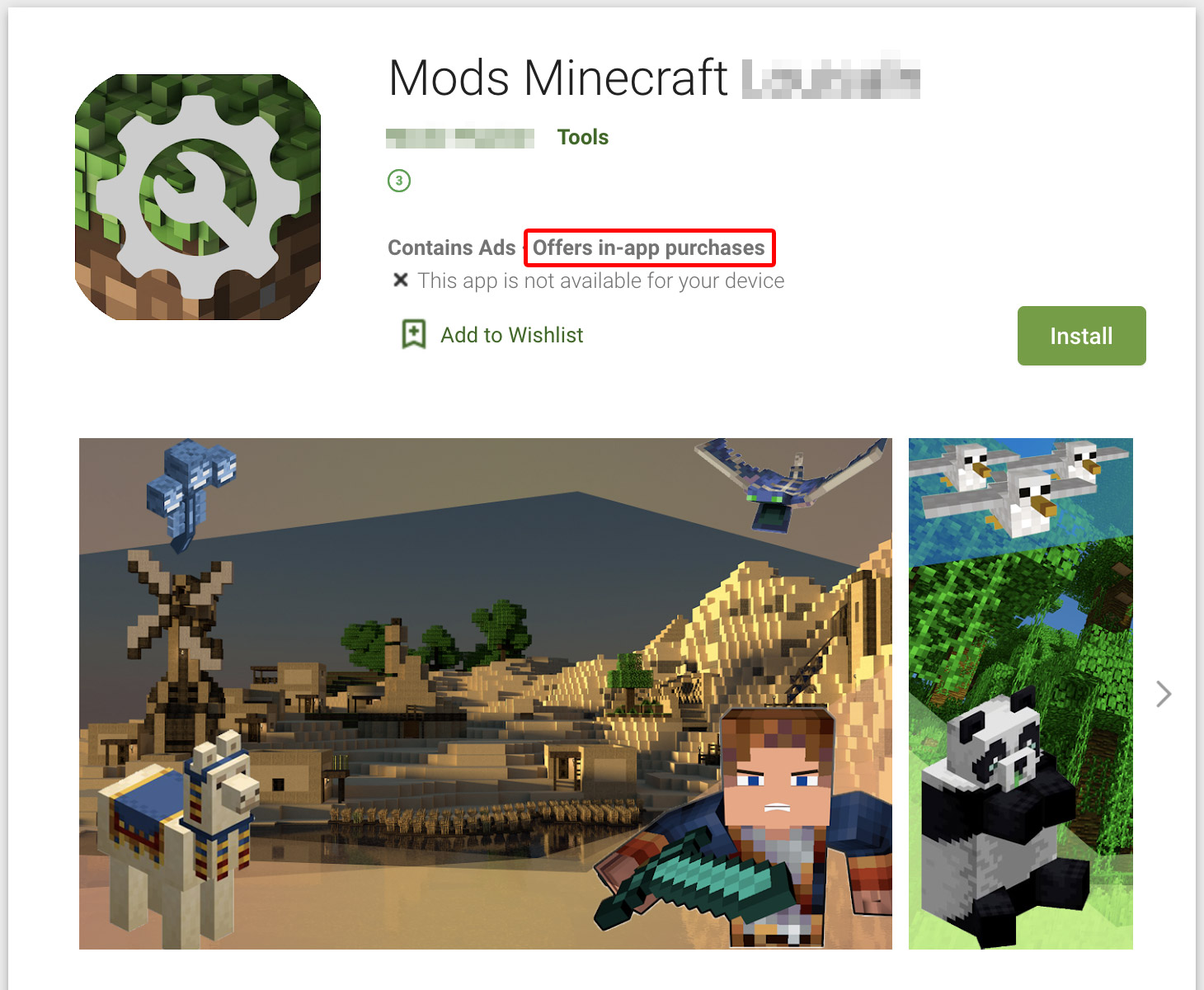 One of the malicious Minecraft modpacks in Google Play

Interestingly, one of the apps is now available from the store as a “basic” version and with in-app purchases enabled, whereas a couple of months back it relied on the extra downloadable module. From this we conclude that their owners are continuing to experiment with monetization options.

Third, we found several more apps were found in which the described above malicious functionality was not the core one. A while ago, for example, Google Play carried a fake Madgicx advertising network app and a fake TikTok ad-management app that would insistently prompt for the user’s Facebook account data and, if user provided it, would steal the account.

Finally, many such apps remain available from alternative stores even after Google removes them from its store. Which is no surprise; even Google, with vastly more resources than the average company, can’t always promptly moderate the great volume of existing apps. Yet we decided to mention this aspect here, as it provides clear evidence that alternative stores are unsafe to use. If still intending to use them for whatsoever reason, at least install a reliable mobile antivirus to protect you against dangerous apps.

That said, as we see from this story, as well as many other episodes of malware getting into the official Google app store, even if you download your apps only from Google Play, you are still better off with an antivirus on your smartphone.