At first it startles: lots of colored tiles not unlike the start screen of Windows 8 – with perpetually running figures on them. These figures are really big and their speed feels a bit mesmerizing. Kaspersky Lab’s new portal Kaspersky Cyberstat is a live statistics tool. It’s rather similar in its purpose to the previous (and fancier) Kaspersky Cybermap: It shows what is going on globally – in the cyberworld as it is now.

The portal pays specific attention to the threats – most active and most harmful malware, most attacked resources, etc. The portal also presents ratings of the most widespread online threats, lists of countries most frequently attacked over the previous month and the number of different malware samples detected today.

This data is complemented with statistical information on the total number of Internet users worldwide, including those users who have only recently discovered the Internet.

The portal pays specific attention to the most active current threats.

Visitors to the new resource will be able to see how many emails were sent in the last year worldwide, the number of blog posts or tweets written in the last 24 hours, and also how many new mobile phones were sold today, how many sites were hacked, etc.

There is even data on the world population (Did you know over 7.2 billion people inhabit this blue ball wandering in the starry void?), including births and deaths today and since the beginning of the year. This data is acquired from Worldometers.info.

While this wouldn’t show you any certain correllation between deaths in 2014 and the number of, say, malicious mobile apps worldwide. But what it does show is the blazing velocity at which the cyberworld is expanding. This, as notes Sergey Novikov, Deputy Director of Kaspersky Lab’s Global Research & Analysis Team, not only provides new opportunities but also brings new risks. 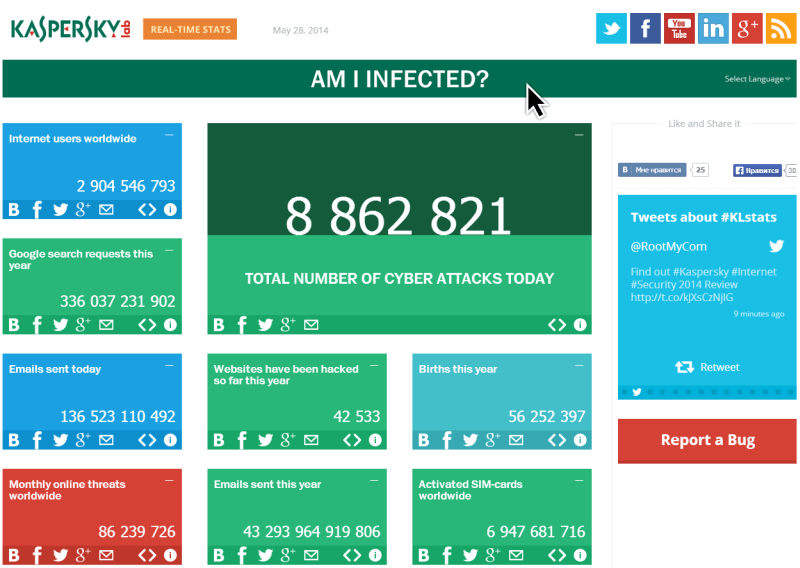 Let’s take a look on the more stable figures.

And, as I’m finishing this post, the total number of cyber attacks today passed 8.8 million mark at high speed. It looks like there will be more than 10 million by the end of the day.

This is our reality.

P.S.: Statistical data is acquired partly from Kaspersky Security Network, our cloud-based service, which provides real-time information about new threats, detected by Kaspersky Lab products. The data unrelated to cyberthreats is derived from other sources, in particular the online statistical services worldometers.info and realityclock.com.

How to deal with internal BEC

One FIFA-related phishing site included a supposedly downloadable ticket, which turned out to be a malicious form of the Banker Trojan that steals sensitive data surrounding users’ online banking data.