Throughout its existence, Kaspersky Lab strives to protect people and businesses from all kinds of information threats. But who said those threats necessarily have the form of programming code?

There are many “information viruses” in the form of word-of-mouth, hearsay, bruits, soughs, buzzes, and non-testaturs affecting our daily functioning in a negative way. All of this malice is there to pry open our skulls and brains and invade.

Moreover, there are unseen adversaries trying to read and influence humans’ thoughts by any possible means; how to stop them?

There is a way!

This year is the 120th since the invention of a tin foil hat – a simple to produce and very efficient information security tool preventing warping and state-altering attacks targeted at our minds.

The history of this protective tool began in 1895 when Conrad Röntgen proved the existence X-rays. The discovery of such invisible rays led many — from scholars and pseudo-scholars to quacks alike – to give their interpretations of what these X-rays meant for the human race.

Among them were articles penned on how soon the rays would completely do away with all personal privacy, for example by being able to see through clothing and even through the skull to our thoughts.

Those premonitions lived on for the entirety of the next century and by no means are they gone now. Secret rays reading or influence our thoughts and dreams, dictating how to think and what to say – Henry Kuttner, for instance, went as far as to describe in his 1953 short story “Year Day” a kind of indoctrinating ray used for commercial advertisement.

Back in the XIX century some “inventor” from London produced special hats meant to protect from mind reading.

As Kaspersky Daily mentions, we don’t know what those hats were made of, but “He was the first to come up with the idea of covering one’s scalp to protect the mind against penetration, and that was the crucial first step of the resistance!”

Fast forward to today, and we get a double-anniversary: in addition to this year being the 120th since the invention of these hats, it’s also 90 years since Julian Huxley published his short story in the Yale Review titled “The Tissue-Culture King”, in which the main character blocked the effect of telepathy.

With a tin foil hat. 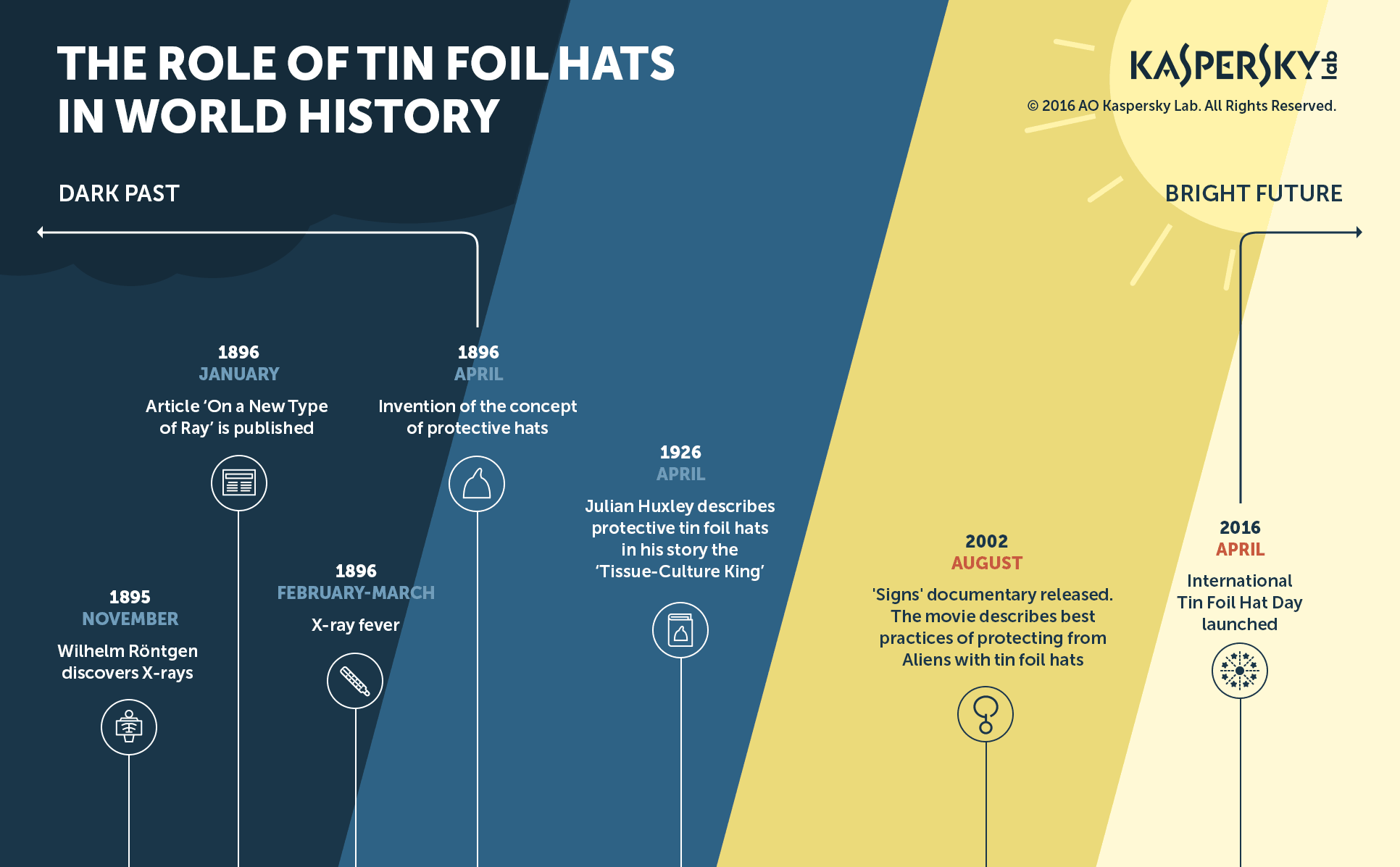 Kaspersky Lab — preferring a systemic, multi-layer approach to securing information — is planning to integrate this mind protection method into some of its security products, including SMB and enterprise-oriented. They will be complemented with bulk quantities of tinfoil-based protective items.

What’s going to protect you from invisible enemies? A tin foil hat, of course!

Today is the first annual Tin Foil Hat Day. What is it?